Where to start? This historical petroglyph has more to it than just one side and feature. It could be reflected as an important literature text, an origin for the Persian writing system, the most detailed document of one historical event, an excellent example of the engraving art of its time, or even an image of how bold and mighty an Emperor could be.

As Persepolis, as Susa, and as Naqsh-e Rostam (Necropolis), Bisotun (the place) was not chosen by accident. If one goes through King Darius the Great’s background, they will perceive his wisdom, or as Hafiz likes to point it out, his Rendi (the most evocative symbol of the indefinable ambiguity of the Persian character).

The cradle of the human civilization in Iran could be found in Kermanshah province, where it draws the mind to hundreds of years ago. The sound of Kurdish horses, how they ride, their costumes, culture, and music are signs of how ancient this land is. Kurds are the natural inhabitants of Iran’s plateau. 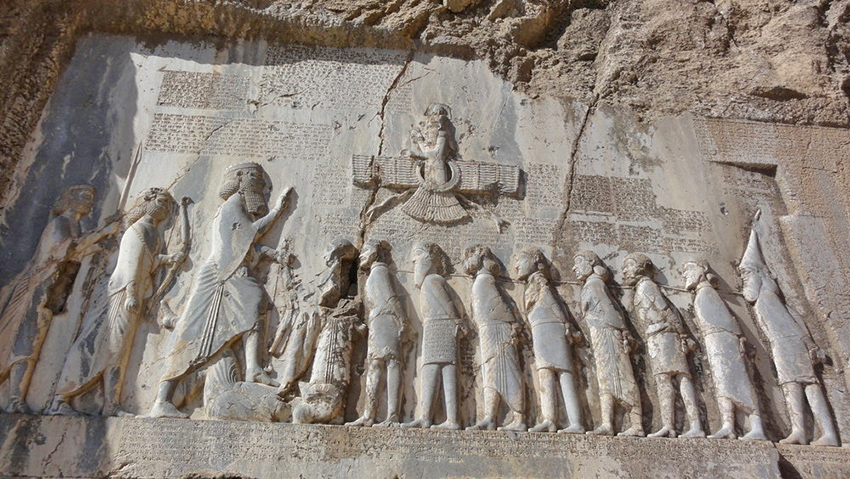 Kermanshah province has long been one of the most important regions of ancient Iran due to its location on highways such as the Royal and the Silk Road which brought east and west together. Kermanshah province was one of the capitals of Iran during the Sassanid dynasty when it was considered one of the important political centers of the country. According to Herzfeld, Kermanshah was known as the gateway to Asia until the 19th century.

These dots lead to a magnificent image that Darius the Great intended to create for the entire world, especially the posterity to observe and understand. He was perfectly well aware of the location of his petroglyph and engraving tobe. He was well aware of its effects and how it was going to impress others. In other words, he was sure his rock relief would be on the UNESCO World Heritage List.

Kermanshah was a living witness to whatever occurred in Mesopotamia. Many Pre-Aryan governments breached the Elamite states including Kermanshah like the Lullubis in 2300 B.C. Among the locational reasons why Darius chose that specific spot, we see that there is another rock relief, 120 kilometers away from the north of Kermanshah, close to Sarpol-e Zahab.

In this older one, Anubanini, the king of the Lullubi, has put his foot on the chest of one of the eight captives. Two of them are kneeling behind the Lullubian (Akkadian) goddess Ishtar and six of them are standing in a lower row at the bottom of the rock relief.

About 250 years later, Darius made the same victory and became king, Shah of all Iran, the greatest Empire world had ever seen. Bisotun is a statement, a symbol of power, of how only the right should rule. Inspired by what Anubanini curved, Darius gave the command to mark his significant victory on top of a limestone cliff near it. At the time the place and the mountain were called “Bagastanah” … A place for God.

When Cyrus the Great was killed on the battlefield, his son Cambyses II naturally became King but with a very short time to rule. He was in Egypt when he heard there is this imposter playing out the King and calling himself Bardiya, the second son of Cyrus who was already killed by his hand. Cambyses died on his way back and suddenly that extraordinary young Empire was facing its end.

There was no one to hold it together. Many local rulers claimed the throne and some stood by this fake Bardiya. There were only a few men who were aware that the real Bardiya is not alive and so Darius stepped in. He gathered all the Royal houses and raised a mighty army and fought every 10 leaders who rebelled against the Empire and disobeyed Cyrus’s orders including “Gaumata the Magus.”

This is the first three years of Darius’s reign that Bisotun tells. Word by word, from the King himself, all in details with date and the exact place. Darius goes beyond this and gives reasons for his actions. Not only he introduces himself, clarifies his background, and his connection to the royal Achaemenid family, he also mentions the states and boundaries of the Empire, then fully explains how everything was chaos before him, how a lie was spreading and there was no one to dare and tell the truth. He says he fought 19 battels and captivated 9 rebellions who claimed to be king.

Darius takes Ahuramazdah, the God as his witness that all that he says is the truth, and whatever he has done was according to his law and justice and so it was all by Ahuramazdah’s grace.

He names the men who helped him and gives statements on how he and the kingdom he built was true: “I was not an enemy, I was not a deceiver, I was not a wrong-doer, neither I nor my family; according to rectitude [I ruled] nor made me my power, and oppression to [those who praise me]; the man (who) helped my house, him who should be well esteemed, I esteemed; (the man) who would destroy it, him who should deserve punishment, I punished” Says Darius the King.

The overall, image that has been curved shows Darius the Great, holding a bow and his hand toward the Fravashi in an Achaemenian way as a sign of respect. Underneath him lies the body of Gaumata, and after he is the other 9 rebellion captives. Behind Darius are the two men who assisted him and were the members of the Royal family.

Putting the historical importance of Bisotun aside, linguistically, its inscriptions hold a great value. The Persian language was and still is to the day, a rich Indo-European language but it never had an alphabet of its own. By the order of Darius, Aramaic secretaries invented a new system of writing for just the Persian language. The language is called Old Persian in cuneiform. At the time, cuneiform was so common between lands but all in different structures. The easiest and most systematic of them was the Old Persian, therefore, it was the first cuneiform to be decrypted.

The Bisotun inscription consists of three texts, in three different cuneiforms with three different languages but all saying the exact same thing. So, by decrypting one, the others were to be decrypted as well. Bisotun is the Rosetta stone of cuneiforms. Many texts in Elamite and Babylonian were read after fully understanding how the Old Persian language and the cuneiform system worked. So many dark and blurry parts in history were discovered. The inscription is approximately 15 m high by 25 m wide and 100 m up a limestone cliff. Bisotun is the world’s largest inscription.

It is clear for archeologists that the Old Persian inscription was added later but this means that the carvers had to curve and re-curve both the Elamite and Babylonian texts to be the second and third language and not the first one to be sighted. When it was finally finished all the ways leading to it were destroyed.

Bisotun is considered a firsthand resource, where the King himself is talking directly to people and from the pieces of evidence, we know that there was only a little time difference between what happened and what he recorded, therefore it was a live report.

The Achaemenid Empire is a part of the world’s history; hence these documents do not belong to just one nation. Its legacies are for the whole world to share. They teach great lessons, set up value, and strong examples. However, if one is committed to the truth they should not give up to just one side of the story.