To start, I guess it is not the impressive label of being one of the world’s largest brick domes that have given the dome of Soltaniyeh the fame it possesses today. Undoubtedly, something beyond the amazing skill of the architects of the Ilkhanate era has kept the Soltaniyeh dome alive so far.

In the year 616 AH, Iran’s history witnessed the brutal invasion of Mongols. The killings, looting, and massacres committed by the Mongols shall be compared only to the tragic consequences of the two World Wars.

The uncivilized people, who were only nourished by violence, sided with the incompetence of the Iranian King and clashed like sparks and gunpowder, and Iran was burnt in the fire of this war.

The loss of life and property on the one hand and the harm done to a large part of Iran’s civilizational heritage, libraries, resources, and historical documents, on the other hand, plunged Iran into a quagmire from which it was almost impossible to get out.

One hundred years later, this tragedy was repeated. It was as if that amount of destruction, turmoil, and cruelty was not desirable enough for the Mongols and had to re-occur by the hand of a grandson (Holaku Khan), following in his grandfather’s footsteps.

Iran was not a place for Feudalism. A handful of scattered families could not rule Iran. Only a united and cohesive kingdom was able to maintain the territorial integrity of Iran and the unity of its people.

The Ilkhanate tried to rule by resorting to this type of government. Unaware that Alexander’s successors (the Seleucid), also were not familiar with Iranian temperament and culture. Besides, Iran had become a Muslim country and demanded Muslim customs and a calm character, which was very difficult for the Khans of this period. 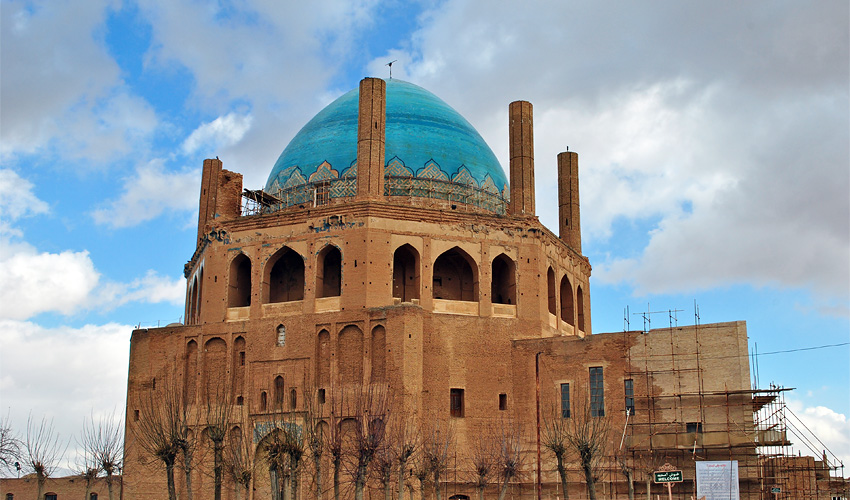 With the help of several well-known Iranian ministers, the devastation inflicted by the Mongols was partially compensated, and when these nomadic tribes became acquainted with civilization, urbanism, and especially the religion of Islam, they tethered that rebellious inner rage and politics aside, they worked on culture too.

The dome of Soltaniyeh could have been only a primitive tomb, but, according to the will and order of the Mongol king, who had calmed down and found peace through Islam and Persian art, it became one of the largest brick structures in the world and an architectural wonder.

The dome has been located in the city of Soltaniyeh in Zanjan Province. This dome was built between 704 and 712 AH, by the order of the Oljaitu, also known as Sultan Mohammad Khodabandeh, and under the patronage and supervision of Rashid al-Din Fadlullah Hamadani. The dome of Soltaniyeh is huge and its grandeur attracts everyone, especially because it could be seen from a far distance.

Soltaniyeh was once the capital and residence of Iranian Kings and today is the tomb of Sultan Mohammad Khodabandeh. Many historical texts and travelogues mention the splendor of this magnificent building and many Western orientalists and archaeologists have emphasized its extraordinary importance to the history of architecture. The main body of the dome and the whole building is made of bricks and the dome is covered with turquoise and azure tiles and in a mosaic style as if it were dressed to attract and welcome.

In the southern part of the dome, the remains of a mosque building can be seen. With careful consideration of this huge building, it seems that in addition to the location of the main tomb, which includes the central building of the dome and is known as “Torbat Khaneh”, there is also the tomb of Mullah Hassan Kashi at the site of Gonbad Soltaniyeh. Mulana Hassan ibn Mahmud Kashani Amoli (703-683 AH), known as “Hasan Kashi”, was a mystic and poet of the court of Sultan Mohammad Khodabandeh (Oljaitu).

The golden and patterned tiles and octagons of the “Torbat Khaneh” and its plinths are extremely special and unique in terms of the art of tiling. The plan of the building on the ground floor and the first floor with the surrounding spaces related to the dome is close to a rectangle form. The second and third floors have an octagonal plan.

This building consists of three spaces: the dome, the tomb, and the crypt. The dome, with a height of 48.50 meters and a diameter of 24.40, is the largest historical dome in Iran and one of the largest brick dome in the world.

This dome is the first double-walled dome. No older model has been found yet. Its thickness is 160 cm and the hollow space between the two shells is 60 cm. Due to the high resistance of the building in bending and shear anchors, it has made it invulnerable to earthquakes.

There are 8 heavy towers with a width of 78.6 meters that carry the weight of 1600 tons of the dome to the foundations. The cross-section of each of these piers is at least 50 square meters, and the load on it is calculated to be 200 tons.

Soltaniyeh dome is an octagonal building made of bricks, the diameter inside the building is 25 meters, at the junction of both sides, two thick and high columns have been built next to each other. Each column is connected to a column at the end of the same side by a truncated arch. As a result, eight high arches have been created on the eight sides of the building.

The building is 52 meters. The interior decorations of Soltaniyeh Dome include plastering, Muqarnas, tiling, decorative lines, and various brick decorations. The dome of Soltaniyeh is a unique collection of the most original decorative arts of Iran. On the inner walls of the building, designs have been made by combining blue tiles and bricks, the words Allah and Muhammad, a combination of the words Muhammad and Ali, and complex geometric combinations of the word Ali could be seen on the surrounding walls.

This is how huge buildings remain. Their story is not limited to the architectural plan, materials, and initiatives of its designers. Behind the dome of Soltaniyeh is the great suffering of a nation that rose again from a bed of ashes and tamed the demon who had conquered them with the gentle touch of its culture, art, and religion.