This time UNESCO decided that it could not just single out one site from this city. The whole picture of Susa was too valuable and varied that it made it impossible to choose. Therefore, the 17th UNESCO World Heritage Site of Iran goes to not one place but an entire city.

Located in Khuzestan Province, Susa is one of the oldest known settlements in the world. Founded probably in 4000 BC and yet there are some disputes among experts that the first traces of a residential village in Susa dates back to 7000 BC. According to ancient documents, Susa was one of the most important and glorious ancient cities of Iran and the world, and archeological are still revealing new and interesting facts about Susa.

The cultural heritage of Susa includes the palace of Shapur, the palace of Apadana, the eastern gate, the palace of Hadish, the fifteenth city, the Achaemenes village, the Grand Mosque of Susa, and the complex of Islamic period buildings, the Acropolis hills and the French castle.

The ancient city of Susa was once the center of a clash of two important civilizations, each influencing the other, the Mesopotamian civilization and the Elamite. The location of this region in the north of the Persian Gulf and also its nearness to Mesopotamia have had a great impact on the emergence of this special interaction. 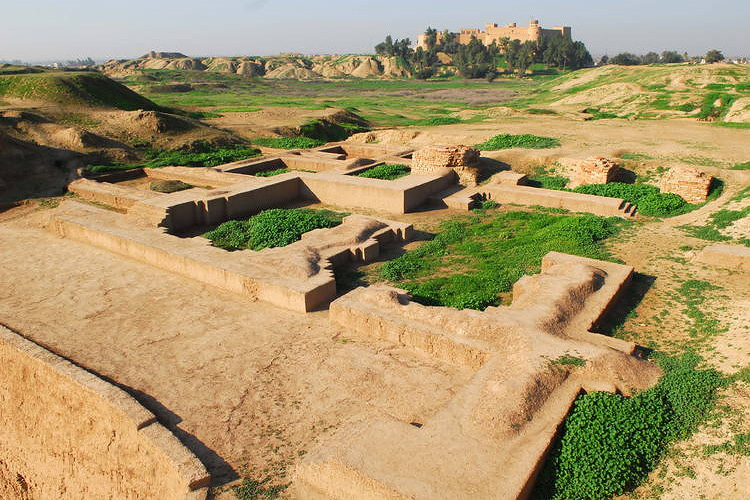 Southwestern Iran is one of the most important areas to study the mechanism of how the first states were formed. From the late Neolithic and early Mesolithic periods, in this land, there is evidence of the construction of canals to transfer water from rivers to agricultural lands.

Nearly 7200 years ago in this region (known as the Old Suzyana), there were villages with two to three social classes, whose leaders and those around them lived in larger sections and others in smaller places. If we want to visualize it today. We could say exactly how Bam’s Citadel was built. Chaghamish area reached 17 hectares during its glorious days but due to the many battles these villages had with one another to gain the superiority of the region, Chaghamish was destroyed and burnt to the ground. Then, it was Susa’s time to emerge as the center of the region.

Shortly after, a three-story managerial structure, which was ruled by small surrounding villages, was considered to own one of the first government systems. At the end of the Mesolithic period, this part of Susa was abandoned and remained like that until the rise of the Pre-Islamic civilization of Susa in the Bronze Age.

By the end of the Bronze Age, Susa again became a city the size of the cities of Mesopotamia, and its ritual buildings were decorated with stone sculptures and tablets similar to those of Mesopotamia. Susa, at its peak, in the time of the Elamite was about 95 hectares.

After the fall of the Akkadian kingdom, Puzur-Inshushinak established a government that included parts of the Zagros, the Persian highlands, and of course Susa. Puzur-Inshushinak erected several memorial temples in Susa, the walls of which were decorated with inscriptions in Akkadian and Elamite scripts. This rule did not last long and shortly after the Elamite Empire, the only native government before the migration of the Aryans appeared.

Around 2700 BC, the kingdom of Elam was formed with Susa as its capital. Susa was the center of this important civilization for thousands of years during the Elamite period and the political capital of this vast empire during the Achaemenes period.

The Masterpiece of Elam is Chogha Zanbil. A Ziggurat temple for the Gods and Goddesses and a place to do religious rituals in Susa. But it has many details and can’t be well understood without studying the religion of the native residences of Iran’s Plateau. Therefore, we have considered a separate article just for this temple of glory.

Susa was the crossroads of East and West. Due to the importance and the special geographical and political position of Susa, many roads, particularly the great road called the “Royal Road”, connected this city to different parts of the world.

The royal road, built during the Achaemenes period by order of Darius the Great, connected the Susa, the political capital of the Achaemenes state, to Pasargadae, Persepolis, and other cities of the Empire, including the famous city of Sard, the capital of Lady. It can be said that the administration of the vast land of Iran and maintaining its security and rapid transfer of military units and the expansion of trade and transportation and facilitation of travel have been the most important factors in the construction and expansion of the road network in this period.

On the other hand, the creation of ways and the establishment of security, facilitation, and trade, led to the connection and familiarity of different nations, which led to the transmission of different cultures and beliefs, and many philosophical views and religious beliefs reached other nations in this way.

The Apadana Palace of Susa was the winter palace of the Achaemenes kings and the main palace of Darius the great, the mastermind behind the Achaemenes dynasty and the creator and God of Persepolis. This palace was built around 515-521 BC in Susa (ancient city) on the Elamite relics.

The walls of this palace were made of clay with a brick facade and its columns out of stone, the very popular architectural fashion at that time. Its inner walls were covered with glazed bricks and had drawings of Immortal Guard soldiers, winged lions, and lotus flowers. Eventually, this palace, like other Achaemenes palaces, was destroyed underneath Alexander’s feet.

But the worst was not specified to dear Alexander! In 1880, a group of French archaeologists dug up the palace from the ground and cut the pillars of the palace with a saw, and transferred it to France. The palace does not exist in its former form. Most of the items removed are now housed in the Louvre. Persians should be grateful that this group of French archaeologists did not step into Persepolis. This is a tragedy for a nation, yes the kings of the time were incompetent but the people were robbed of their national heritage, of what their ancestors had left them.

French archaeologists removed a large amount of Susa antiquities from Iran, using the railroad and a large number of ships and the day-to-day work of thousands of Iranian slaves and workers. The remnants of the city of Susa, even after Alexander the Great’s invasion and natural erosion, have been so astonishing in all the travelogues of the region that much has been written about it. The French plunder has been so great that today the sight of Susa is nothing but buried artifacts, while there is almost no museum in a corner of the world that does not contain numerous artifacts from Susa, indicating the vast extent of the looting of ancient Susa over several decades.

Dear Mrs or how she was titled as Madam!! Jane Dieulafoy says so passionately in her diary that: Yesterday I watched with regret the large stone ox that has been found in recent days, it weighs about twelve thousand kilos! It is impossible to shake such a huge mass. Eventually, I could not control my anger, grabbed a sledgehammer, and fell on a stone animal. I hit him brutally. The head of the column split like ripe fruits as a result of hammer blows.

During the Sassanid period, Susa, along with Shushtar and Gundeshapur was considered as economic centers for the production and export of silk to all parts of the world.

Susa was captured by the Muslims in 17 AH. During the Islamic period, it was one of the most populous and prosperous cities for a long time. However, Susa lost its importance when the center of Khuzestan shifted towards Ahvaz.

Well, to end this article, we invite you to visit museums all over the world to see the fascinating UNESCO World Heritage Site and, then we welcome you with open arms to see the motherland, where all that great culture and civilization was born.