Connecting the dots back to the origin of Isfahan we learn that basically, this city started to grow around the one thing that could gather, shelter, and stand for the people; the Jameh Mosque.

A Jameh Mosque which is also known as a congregational mosque or a Friday mosque is the main mosque of a certain area that hosts the special Friday noon pray. This is not specifically an Islamic thing. Any religion with a defined space for any member comes to establish a grand place where all of the followers could gather. In Islamic countries, this dedicated area was a mosque but not just any mosque. It had the name of Jameh, which means gathering, congregating, and assembling.

As Iranians enriched the Islamic civilization, one of their maneuvers were the Jameh Mosques. A place where they could embody their imaginations and turn what they believed in, into dazzling art. Isfahan was lucky enough to have great climate conditions that any fine city needs and by putting nature’s gifts in use, it turned out to be a perfect symbol of how a city should be. 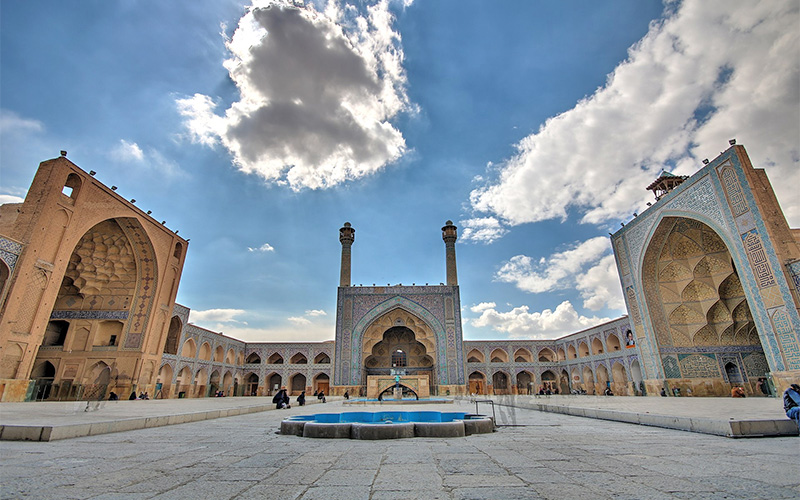 Isfahan started to grow around the Jameh Mosque in the late 8th century. The first square was formed around the mosque and then the markets were built and over time more people settled in the area and it became the central part of Isfahan, someplace where all the roads led to. The urban planning gradually flourished and so the Jameh Mosque had to expand due to the city’s expansion. It became greater and fresher than before. New materials made it stronger and each new style in art and architecture formed the Jameh Mosque of Isfahan differently.

This firm attention toward the Jameh Mosque from governors of Isfahan or even Kings shows the importance it had both for them and the people. This position gave the mosque its significant role and it became a center for the cultural and religious activities of the people during the Buyid, Seljuk, Ilkhanate, Timurid, and Safavid eras.

Isfahan, as any other metropolis in Iran, is a city where people live, work, and worship close to each other. This structure became a pattern in urban engineering; A place to worship, close to a place to govern, surrounded by people who make their living from small stores or bazaars.

People used to enter the mosque several times a day to perform prays. Later on, a bath, a school, and other important urban elements appeared in its vicinity. The mosque had special rules for entering, leaving, stopping, and passing by it. No one could deny the sanctity of the Jameh Mosque. However, the main courtyard of the mosque also served as a local square where people could socialize. Not only this socialization didn’t interfere with the praying purpose of the mosque but also it was the golden goal. Establishing a place where it could create unity among people.

The Jameh Mosque was never closed; people worshiped and studied in the mosque day and night, and it was a resting spot for travelers and pilgrims. Nevertheless, the non-Muslims folks were not allowed to enter. When new organizations such as the Ministry of Cultural Heritage were founded, these buildings became a place of high historical importance and were opened to any visitors regardless of their faith. 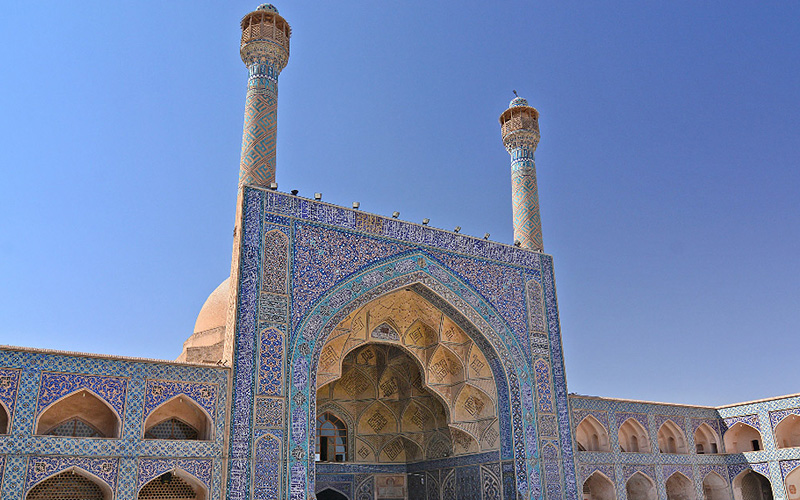 The Jameh Mosque of Isfahan was more than just a place to pray and do religious rituals. In its lifetime of 1400 years, it gave scientists, scholars, artists, and students a place to practice and exchange their thoughts and beliefs. Kings would first go to this mosque when they entered Isfahan. Important statements were announced there and above all, it was and still is a portal to connect with some of the best innovations that architects and designers came up with within the history of Islamic architecture.

At first, it was a small mosque with poor materials; no special shape, no special decoration. Due to the rush of the first group who constructed the foundation of the Jameh Mosque in the 8th century and because they were not from Iran and therefore they had no idea of how to uses the local materials for masonry, the early version of the mosque was acceptable. It had the potential to be the core of Isfahan.

Given the ups and downs of Iran’s history and how dynasty after dynasty or different local governments ruled over Isfahan, many changes were thrust upon the Mosque. However, there are two turning points to this mosque and the first and the most important one is when the Seljuk dynasty decided to anoint Isfahan as their great Capital. Many taxes and the spoils of the battles, came straight to Isfahan and so, it was rich enough to shine and boast itself.

Seljuk architects, designed a new plan that could be called innovation in mosque architecture. Instead of having just one small building with a courtyard, they used the idea and the plan of Persian Iwan (Porch).

A porch is a sitting area higher than its surroundings, which is usually built on the outside of the building. Iwan has existed in Iranian architecture since the Achaemenid period and has been built in various ways. The porches usually have arches, are closed on three sides, and open to the mezzanine. Porches are one of the most important components of a building and so they give the building prominence and splendor. The porch is the focal point for various decorations. It gives the artist space to implement their art such as muqarnas, brickwork (Razi Style), bedding, and tiling.

As the mosque was not only for religious rituals, it had a rich library, schools, monasteries, and repositories for documents. It was the symbol of Seljuk’s power, particularly their mighty wise politician and minister, Nizam ol-Molk. That is the reason why the Nizari Ismaili State burned the Mosque and all its belonging down and caused serious damage to the construction.

During the reign of Ghazan Khan and Al-Jaito (14th and 15th century), Isfahan was greatly developed. Al-Jatio built an altar in the western part, which became quite the most beautiful plaster altar of the era. The finest plastering and calligraphy were used on it to make it unique. The arches of which the Ilkhanate added to the Jameh Mosque each had a different cover; A cover that has been unprecedented in other historical periods.

The Jameh Mosque of Isfahan is a rectangular building. Its main courtyard has dimensions of 70 × 60 meters, has two ponds, and a platform. This platform was mostly used for practicing Hajj and a place to gather students. This mosque has ten entrances; fourteen altars; Six altars are made of tile, five altars are made of stone and three altars are made of plaster alongside the four mentioned porches.

Due to its historical significance, in the 20th century, it was registered as a National Heritage of Iran, and later, UNESCO took it as a World Heritage.

Maybe the best way to close this article is quoting from Arthur Pope, and leave the judgment to you.

“That day, when I went to look at the Jameh Mosque of Isfahan and stood under its dome, I realized that my whole being is in the possession of the dome and the mosque. And I saw my love and affection for Isfahan and Iran increasing, I want my body to be buried in this sacred land.”