Hormozgan province, with Bandar Abbas as its capital, has long been a place for the first communities and the cradle of ancient culture. Now, different ethnical tribes Lurs, Persians, Arabs, black Africans live in this Province.

It seems that all of these different colorful cultures have created a unity somehow known as “the culture of the South” or in Persian “Bandari”.

The language of the people of Bandar Abbas has kept the Persian language alive from the ancient period, Achaemenid and Avestan, to the Middle Pahlavi and Parthian periods.

It is the language, however, that determines the antiquity of a nation and its richness. Tells you how they think and do they work. Especially in Bandar Abbas where the folk music echoes this feature.

The second-largest city in southern Iran and the capital of Hormozgan province is Bandar Abbas. Bandar Abbas is the largest port in Iran, formerly known as the “Gambron” Port. 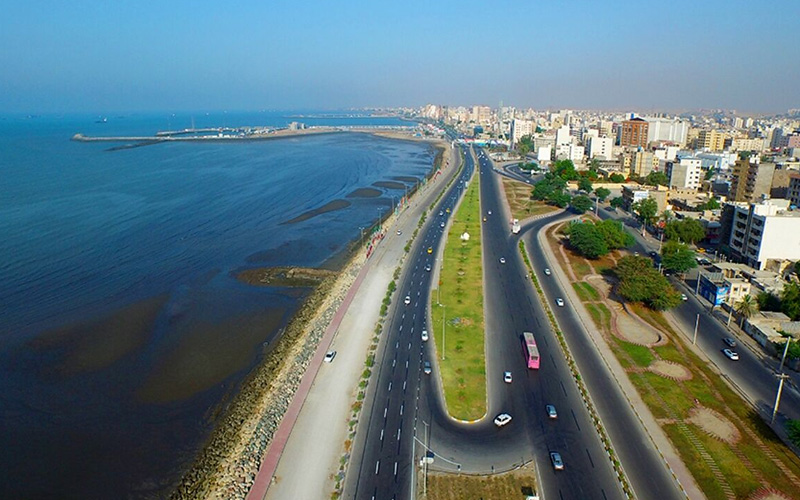 Bandar Abbas is 1287 km by land from Tehran. The climate of this city, which is located exactly north of the Strait of Hormuz, is as hot and humid as the whole province. Winters are short and summers are long and moist.

According to historical narrations, Shah Abbas I Safavid was able to defeat the Portuguese, who had anchored there to have a commercial port for themselves and then had occupied the city. Thereby, the city’s name was changed from Bandar-e (the port of) Gambron to the Bandar Abbas!

The people of Bandar Abbas are generally followers of Islam, but the Sunnis make up a large percentage of the city’s population.

Many handicrafts, could be counted as Bandar Abbas’ souvenirs.

The Brocade for instance, dates back to the Achaemenid period, which is one of the most famous and important handicrafts in this province and is one of the main components of indigenous clothing for girls and women in this region.

One thing that you will see no place else other than Bandar Abbas of Hormozgan Province in general, is a ritual.

Zar is the most interesting and perhaps the most terrifying ceremony of these people. Those who believe in this ritual say that some human beings are possessed by invisible forces called “wind”. These winds have different personalities and cause illness, depression, and psychosis in the possessed person. The ritual is for the treatment of these people and the costs of performing this ritual are paid by the patient.

First, when someone suspects that a person has been possessed, they are to keep the person away from everyone for seven days.

The most important part of this ritual is the vocals they sing and the instruments they play to get the wind out of the body of the conqueror. According to the leader of the ceremony, these winds are sealed with music. They gradually identify the wind and the wind reveals its name to them.

This ritual is a kind of music therapy (psychotherapy). The music field is completely different from other forms of music in the southern ports, both in terms of type and in terms of instruments, as well as in terms of songs and melodies.

Now, where should we site see in Bandar Abbas:

The Indian Temple of Bandar Abbas or the temple of Bot-e Guran is one of the most interesting historical monuments, the architecture of which can surprise anyone.

The Temple was built in 1210 AH. During the reign of Mohammad Hassan Khan Saad al-Mulk, the ruler of Bandar Abbas at that time. It was built by Indian merchants and by the collection of Hindu gifts.

The Indian merchants who lived in Bandar Abbas decided to raise a temple for themselves instead of worshipping in caravanserais so that they could pay respect to the gods of their religion in a better manner.

The statues of these gods, Vishnu, Shiva, and Brahma, used to exist in the temple, but later the same Hindu merchants took them back to India.

The architecture of this temple is singular in Iran. The few paintings left on the door and wall of this temple depict the gods of Brahmanism and religious ceremonies. 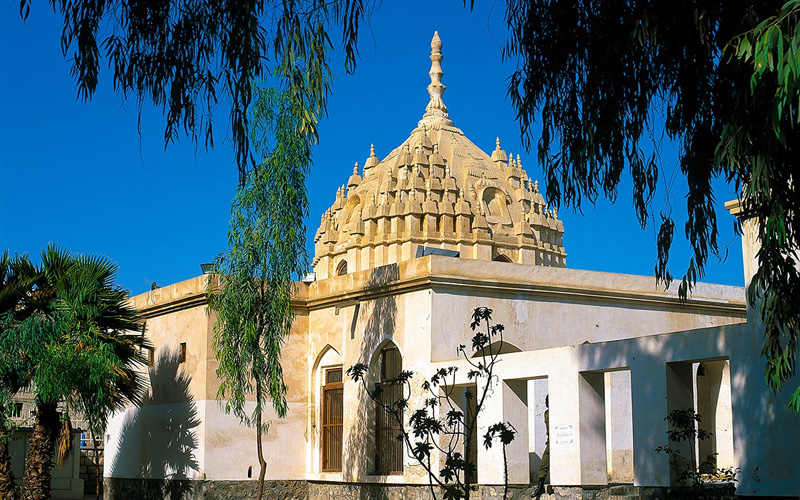 This museum, which has a good potential to become one of the best tourist attractions in Bandar Abbas due to its location on the site of the famous “rain ponds”, is a valuable example of harmony, honesty, creativity, and attention to artistic, regional architectural culture.

The museum is a three-story building and its anthropological section is a reflection of the traditional bazaars of Bandar Abbas, how the city was liberated from the Portuguese merchants, and fishing as the people’s first way of making a living

The museum also has an archaeological section that, based on its data, traces people from the Paleolithic age and their migration from Africa to Asia.

The historical, Islamic section, and the coin museum are other diverse sections of this museum.

With the advent of urban plumbing and baths in homes, this public bath slowly became an abandoned place until it was registered and revived in the list of national monuments by the Cultural Heritage Organization in early 1990. It is open to the public today on even days.

The late Sheikh Ahmad Gallehdari was one of the noble and wealthy businessmen in charge. He was the one who established this place intending to provide social services to the people and dedicated it to the local mosque, which is also known as Gallehdari Mosque. This bath dates back to the Qajar period.

In the memoirs of those who went to this bath from childhood, it is said that the Gallehdari bath was for both men and women, in turn. For women, it would be completely enclosed and so they could spend the morning and the afternoon in the bathroom with special ceremonies. 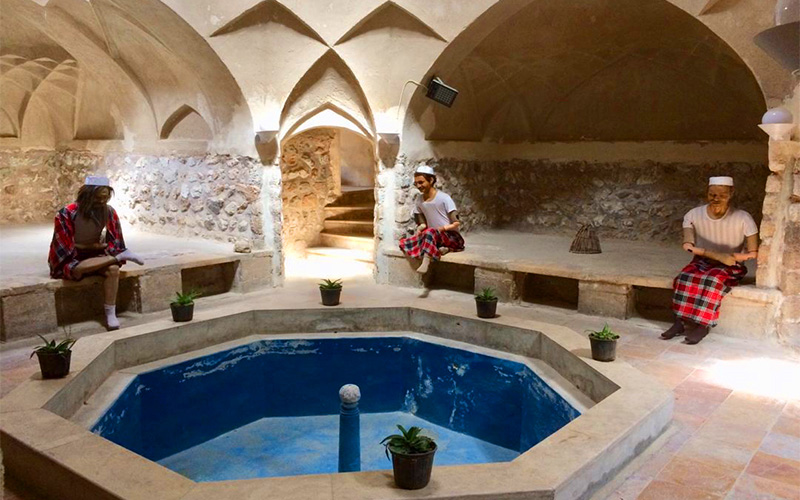 Water Reservoirs AKA as the Rain Ponds

Iran has long been plagued by drought. One of the innovative solutions was to create a water reservoir.

In Hormozgan province, the reservoirs of “Berkeh Baran” or Rain Ponds, are beautiful and attractive constructions that have long been a source of hope for passers-by, residents, and water seekers in this area.

Bandar Abbas Rain Ponds have used a clever way to make optimal use of the water and overcome the hardships of drought, water shortages, and the difficulty of providing water for irrigation.

The architecture of these water reservoirs is in the shape of a cross and includes 5 ponds, the most famous of which are called Red Blood and Sea Pond. They have domes that are made of materials such as mortar, coral, and river stone. The Ponds are built in a large, wooded area.

There are local markets where you could find ethnic things and also observe how people fair in life. You might even be tempted to buy traditional costumes such as Burqa!

Most people think that wearing Burqa is because of Hijab. Not in Bandar Abbas, the women have long used Burqa to escape the superpower of the sunlight. These Burqas are very pretty and hard to make.

The Persian Gulf, the long everlasting infinitive blue offers you its shore to take a walk and relax.

After all, we must add that though Bandar Abbas is an ancient and important city, today it’s considered one of Iran’s Metropolises.