Jafari Shiite of Islam has been the official religion of Iran since the 16th century.

An estimated 93 percent of all Iranians follow Shia Islam, and nearly all are members of the Jafari group. Since Jafaries believe there are 12 legitimate successors, or imams, to Prophet Mohammad, they are often called Twelvers (Asna Ashari).

The small remaining part of the population belongs to other Islamic denominations, primarily Sunni Islam. Iran also has small communities of Armenian and Assyrian Christians, Jews, and Zoroastrians. 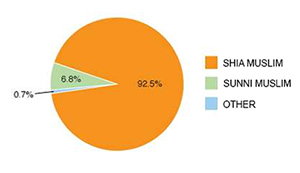