Eastern Azerbaijan is one of those provinces that has everything all together. A city with all kinds of diversity, a total complex with tokens from the Stone Age to the Qajar dynasty.

Boundless pristine nature covered with colorful flowers and greenback to back hills, beautiful historical monuments, and as Darius the great says “a Land that has nice people”.

This region has customs that have survived all these decades and a language that distinguishes it from other regions of Iran. Wonderful music and folk dances that play the soul and in general a one-piece society, a metropolis which has made it one of the top industrial and tourism hubs of Iran.

The city of Tabriz, on one hand, has seen everything that could happen to a city from the start of history till these modern days. Tabriz has been considered Iran’s capital in most post-Islamic governments. Now, Tabriz is one of the five metropolises of Iran with a high economic and industrial status. 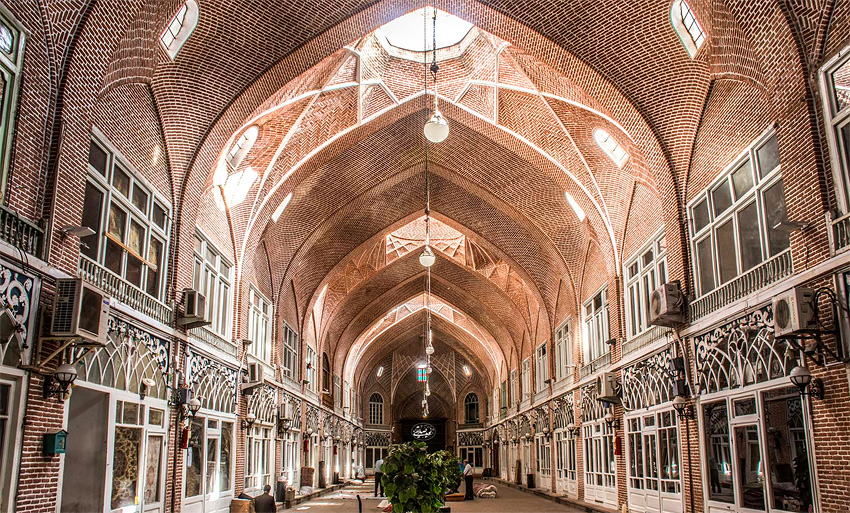 Tabriz’s unique industries such as leather and carpet weaving, as well as the proximity of this city to neighboring countries, made it a trade center, long before any other places could even form a huge company or caravans.

Tabriz Historic Bazaar Complex is the largest and most important indoor bazaar in the whole world and this is considered a star record for Tabriz and Iran in the field of architecture.

The area of ​​this large market is about one square kilometer and the committee of UNESCO World Heritage Sites have considered this trading complex as a heritage which all the world could participate in it and be shared.

This market consists of numerous bazaars, corridors, and caravanserais (in Persian “Timchehs”). As mentioned earlier, Tabriz was of great commercial importance and economically valuable, located on the Silk Road, and many Muslims and Armenians were earning a living in this Bazaar.

The construction of this bazaar helped a lot, especially since it was so large that it covered almost all the needs of the owners -of the Chamber or cells in a bazaar, a small store -, the merchants, and the customers.

Sources say that many tourists and travelers such as Jean Chardin and Marco Polo have also passed through this Bazaar. The existence of caravanserais, mosques, seminaries, Timchehs, and many houses in this market indicates the great economic situation of this it and speaks of its great prosperity.

Today, almost more modern markets have been added around this old neighborhood, and in general, this part of the city is the most crowded and busiest place of Tabriz.

From the second half of the thirteenth century, English merchants used to transport their commercial goods to the Tabriz market through the Silk Road, after passing cities such as Istanbul and Trabzon. This market had become the center of British trade during the time of Abbas Mirza, air to Fath-Ali-Shah Qajar’s throne who was a hero in the wars between Iran and Russia.

After the thirteenth century, Tabriz was considered the main base of European trade with the northern regions of Iran; So that in 1256, this city was responsible for 25 to 33% of the total trade relations of the country, and in this regard, it was considered greater and more important than Tehran. Also until 1285, Tabriz was known as the main center of Iran’s trade with Central Asia.

Aforetime, Armenians were considered as one of the main pillars of the Tabriz Historic Bazaar Complex. One of the French tourists reported back that the special and privileged position of Armenian stores has done a great deal to boost up these complexes’ prosperity. Armenians traded a lot with Europeans; For the first time, the Armenians of Georgia bought British goods from Istanbul and brought them to the northern regions of Iran.

The central core of Tabriz is located inside a quadrilateral and Tabriz Historic Bazaar Complex is located in the center of this quadrilateral. This bazaar is limited from the east to Aliaqapo (a complex of Crown Prince palaces) and from the west to the Grand Mosque, and from the north, it includes parts of the north of the Chai Square (Mehranrood) which used to be connected with a series of wooden bridges all around the bazaar.

The Chai Square separates the two parts of the old bazaar of Tabriz. The northern part of the bazaar has gradually lost its importance due to its separation from the whole complex and the transfer of trade and commerce to the streets. The width of the market passages is between four to five meters and the height of the roof is five to six meters, which is shorter than the ceiling of the markets in tropical Iran.

The first architectural plan of Tabriz Historic Bazaar Complex was designed in 1327 AH, in the Dar al-Saltanah (Tabriz was where the Regent would live and govern the whole region) of Tabriz by Assadollah Khan Maragheh.

Most stores and houses in the bazaar have three floors, the lower floor is for warehouses, the second floor is for businesses and workplaces, and the third floor is designed as a resting area. The main streets of the Bazaar are connected by archways and Timchehs. The dome brick arches are constructed perfectly. The largest dome of the Bazaar is the dome of Timcheh Amir and the most beautiful type of architecture is Timcheh Mozaffariyeh.

In Tabriz Bazaar Complex, there are about 12 chapters of the School of Religious and Islamic Sciences such as Talebieh, Sadeghieh, and others. Tabriz Carpet Bazaar, known as Mozaffariyeh Bazaar, is one of the most remarkable historical constructions in Tabriz. This market has been selling carpets to many countries since ancient times and it is continuing to do so.

The Tabriz Bazaar Renovation Project became one of the five projects selected by the jury of the Agha Khan Architecture Award in 2013.

“Once upon a time, Tabriz was considered a modern city compared to Tehran and the people of Tabriz from ancient times, even before the Safavid era, were in contact with Europeans and traded with them … In such circumstances “French livre” and “Russian Ruble”, the currencies of different countries in the Tabriz Bazaar were as common as the Iranian currency.”