No matter how hard we try to talk about everything Kurdistan has to offer, we still find more. The location of Uraman Takht village is in the southeast of Mariwan city in Kurdistan province. It is connected to Mariwan city by a 75 km long road.

From ancient times, people built the houses of this village of stone, like series of stairs. As the public says, one roof in the courtyard of the other one.

The people of this village believe that Uraman was once a large city and had a capital. There is why, Uraman is known as Uraman Takht, the Persian word for the throne or the center of the Uraman region. The village of Uraman Takht in Kurdistan is located in the heart of the high mountain range of Zagros. Uraman took place aside and along the Sirwan (Diyala River) River.

In recent years, archaeologists have excavated the whole area of the Uraman region. They have tried to study the district carefully. Archaeologists date back Uraman to 6000 years ago to the Copper Age. 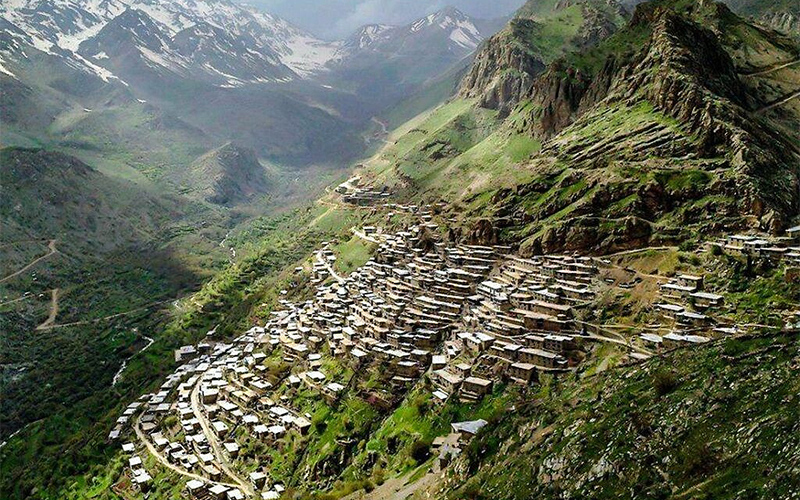 There is an inscription in Uraman that belongs to Assyria. There can be another proof of the antiquity of the region. Images of the Assyrian ruler named “Sargon II” are engraved on this inscription. Also, after translating the cuneiform inscriptions, experts have found that they refer to the subject of the Assyrian ruler. It seems that Sargon II attacked Uraman and Zagros regions.

We should also mention two ancient Parthian side scripts on animal skins from the Parthian Empire in Uraman Takht. Plus, they found parchments of Avroman, a contract for the purchase and sale of a vineyard worth 48 dirhams. This Parchments of Avroman is in middle Persian Parthian and Greek on deerskin.

Some others believe that the history of the Uraman urban center dates back to the Sassanid dynasty. But when archaeologists found Parchments of Avroman, it was safe to relate the ancient village to the Parthian age. Because at that time, the other official language for documents was Greek.

The customs and names in this area are living proves of how old Uraman is. But the fact that the city must be related to the Sassanid epoch requires accurate documents. In the present, there is no solid document to back such a claim. This also has a good reason. The Sassanid dynasty had severe enmity with the Parthians. Destroying any evidence of Parthians was their hobby.

This region is a mutual part between Iran and Iraq and has a winding plain with beautiful and various rivers, attractive and mesmerizing. The famous springs of this region are Sirwan (Diyala River) and Leila. The two rivers meet near Iraq and in a stunning plain named Daruleh. 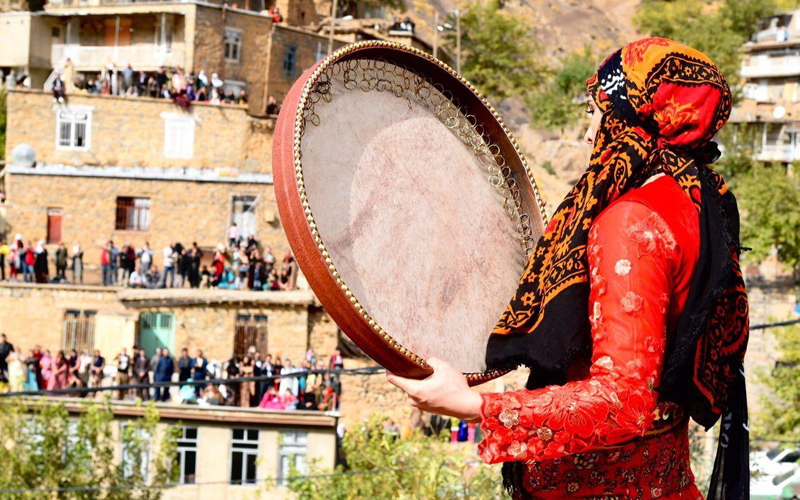 The houses of Uraman Takht are generally made of stone and built in the form of arches and steps. There is why Uraman is also known to be the village of Hezar (one thousand) Masuleh. The architectural style of these two villages is the same. Masuleh of Gilan is more famous.

Uraman consists of two parts, small and large. A small part of the city, Halabja, is part of Iraq, and a large part is one of the provinces of Kermanshah and Kurdistan of Iran.

Uraman Takht village is the center of Uraman district, and most of its people have settled in cities such as Tehran, Mariwan, Sanandaj, Halabja, Javanrud, Kamyaran, Ravansar, and Kermanshah. This historic village originally consisted of three parts, Uraman Takht, Zhavehrud Rural District, and Lahun.

In addition to being mountainous, this beautiful land has large and lush forests. Trees such as oak, hawthorn, and wild pear have grown in these forests. They have doubled the beauty of this region. It seems that the people of Uraman have used the wood of these forests to heat their houses and cook food since ancient times.

The stepped architecture of Uraman Takht and its spectacular houses have shaped the village into a pyramid. There are ancient castles at the top of this pyramid-like village. The architecture of Uraman and the greenery of this dreamy mountainous region seem to depict steps towards heaven. As though it was designed to take you to infinity and beyond.

A river is one of the main reasons for creating civilization. Usually, we can find large and ancient urbanization alongside the rivers.

Sirwan (Diyala River) river flows in the southwest of Kurdistan province. The spring of Sirwan river is in the depths of Hamedan mountains and after passing the scrolled high peaks of Zagros from the southwestern, reaches Uraman.

The main part of this river flows through Sarvabad city and the ancient region of Uraman. Then enters the Great Tigris River in Iraq after joining the Diyala River. Sirwan is the longest river in Kurdistan province. The banks of this river are very beautiful. Its bed and sides are home to a variety of birds and fish that are very useful in terms of recreational and tourist exploitation. 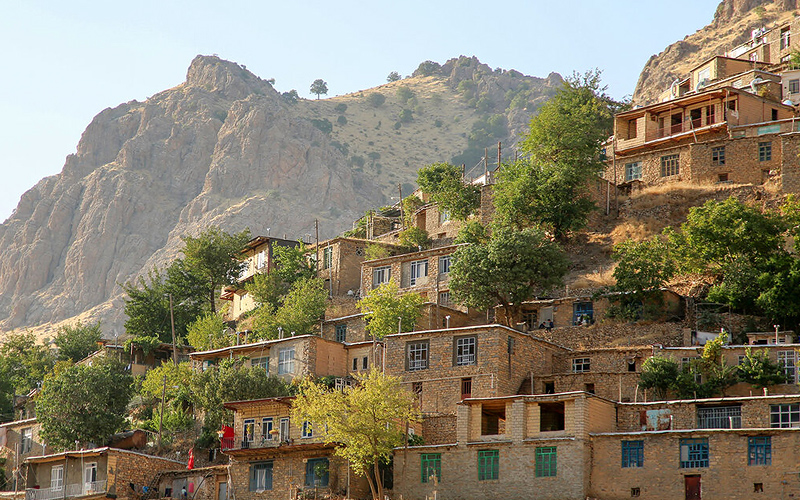 Uraman Takht, despite having natural attractions and gorgeous architecture, has a unique spiritual ceremony such as Pir Shalyar. Pir Shalyar is an annual winter tradition.

The people of Uraman come to this gathering in their special Kurdish clothes and hold mystical music and special cooking ceremonies. They believe Pir Shalyar was one of the elders of the Uraman region who was engaged in promoting Islam in this region. People hold two ceremonies in his honor every year in two seasons, one in spring and the other in the middle of winter.

What catches the attention of people who come to watch this ceremony is the customs and traditions. We can find traces of Zoroastrianism in what they wear, play, and do. The Pir Shalyar ceremony is very complicated. We will discuss this in another blog.

The tomb of Pir Shalyar was a follower of Abdul Qadir Gilani, is located at the bottom of the Uraman asphalt road. The ritual includes slaughtering the sacrificial animal, Daf playing, dancing, eating Ash (Persian stew), and spending the night reciting poetry and prayers.

Kurdish folk music like Siyachamane, Chapleh, and Minalil are popular in Uraman Takht. So is an ancient Kurdish dance named Halparke. You could go to Uraman Takht and never come back.