Maybe, just maybe the magnificence of Persepolis is how it was designed to represent a utopia.

To understand this, we must pay attention to many factors. It wasn’t like someone stood to be an Empire and so Persepolis was built. In the Achaemenid way, there were some quite exquisite capitals, Susa for instance, or Babylon. Darius could have had any one of them to embody his vision with. But as how we find in Persepolis, Darius the Great was a peculiar man.

Did he need a reason not to be? By all means, he owned the world’s greatest Empire. From the borders of China to Egypt and Greece, everyone was at his disposal. He had eyes and ears everywhere and above all, he had the wits to manage it all. Surly, Cyrus the Great established the Empire and started something marvelous, indeed he gave it the identity but it was still weak as an infant when he passed away. His son tried as the documents say, but dying so suddenly and mysteriously, the chaos spread, and the Empire was likely to be dead in its very early years.

Like any other epic story, someone comes. Someone always rises, someone brave and wise enough to know how to put an end to the turmoil. Not only that Darius had those qualities but also possessed a claim to the throne and thus, had the intentions needed to direct the mess created by the lack of supervisory, into his favor. 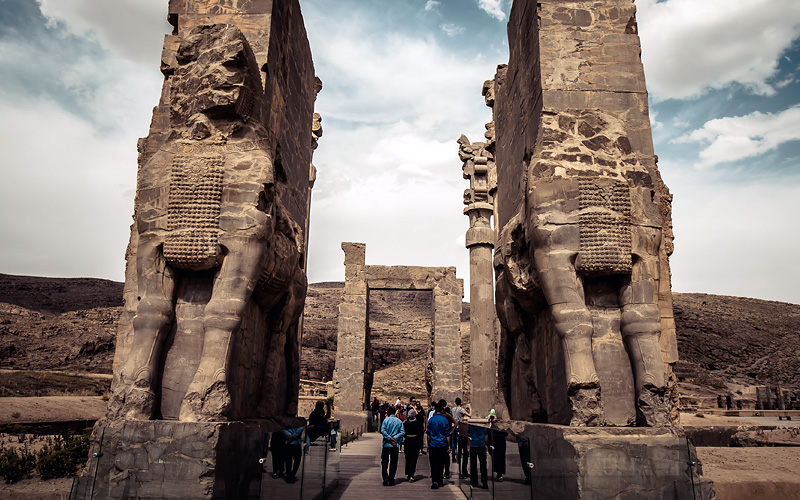 He struggled hard but with wisdom, therefore he achieved what he was after and a lot more. He submitted every land that Cyrus the Great conquered before to the Empire, married his daughter, Atusa, and added a few states to his territory so that after 2500 years, he still owns the record of obtaining the world’s largest Empire. He had 44 percent of the known world at the time, under his wings. He was entitled to have a utopia, did he not? The least expected from him was to create such a place.

And so, he did it in a way. The history of the Achaemenid is quite clear, due to the first-hand documents and texts the kings have left behind, what Greek historians have recorded, and archeological discoveries.

Darius, settling the disarray, gave orders to have his triumph carved out in Bisotun with the first alphabet, the Persian language ever had, having Sard, Susa, Babylon, Pasargadae, and Ecbatana, the world’s most advanced cities at the time to choose as his headquarter, still missed something.

There was a vision. A vision of how he could leave behind a legacy for the whole world, the people of future, to know how he ruled, how he was, what he did, and defiantly to form a strong example of how a realm should be governed, how to be a manager of such a vast kingdom. This vision represented itself in the stones of Persepolis.

A fertile plain at the foot of a very ancient mountain called Mihr (Mithra, Rahmat), was that one place that Darius thought had what it takes to embrace his vision and carry it on through the roughness of time and still be able to shine bright like how a diamond does. The mountain was a sacred place long before Darius was born, so he counted on this sanctity to be present still when he was long gone. And so it did.

Persepolis was a city of celebrations. Darius had his political states, he wanted somewhere to share the gift of happiness which was bestowed upon people by Ahuramazdah himself.

It is so sweet to learn that in every epigraphy that has been found in Persepolis, Ahuramazda, the one and only God, is called the creator of the sky, the earth, and happiness. Thus, happy ceremonies like the great festivals of Nowruz was held in Persepolis. Everyone from any part of the realm would send their representatives with special gifts to the king.

Darius’ skilled lithographers managed to give us the same image of what took place, 2500 years ago in Persepolis. His specialty was to gather all the good, beautiful, and best materials, workers, designers, artists, lithographers, and masonries to build Persepolis but the genius and unexpected feature are that he does not entitle himself to either of their works. He says, clearly that how the Greeks, for instance, have worked beautifully on the pillars and how the people from southwest of Iran (Susa, Khuzestan) who were masters of creating gorgeous handicrafts helped with the decoration.

Persepolis was labeled the “wealthiest city under the sun” for all the precious gifts and unimaginable decorative materials that were kept in there. Also, Persepolis had (still has) a treasury where not only the valuable presents were well reserved but many clay tablets found in later excavations revealed how the construction of Persepolis and the administrative system of the Achaemenid dynasty took place.

From these clay tablets, we understand that every worker, from the simple one to whoever was the head, was being paid. While some of the world’s greatest constructions like the Great Wall of China or the Egyptian Pyramids were built under massive slavery, Persepolis embodying Darius the Great’s “justice for all” law, respecting the human right which Cyrus the Great established. Men and women worked for their free will and got a fair wage. Adding to this nobility, these clay tablets also mention that working women had maternity leaves.

These women would do many various jobs, other than decoration, painting, and sewing, the third part of the lithography was their duty. From the Unfinished Gate in Persepolis, we could see how it was built. First, the miners would extract massive loads of stones from the Mihr mountain, then the three groups of lithographs would work on the stones. Depending on the purpose of the stone and where it was going to be used, the first group would shape the stone, the second would levigate it and finally, the third group who were mostly women, would do the delicate levigation on the fragile parts and turn that well-shaped stone into a head of a bull or a horse or many lotus flowers.

As they say, “Rome was not built in a day” the same goes for the “wealthiest city under the sun.” It took approximately 150 years to be the place we see today, well not exactly as how we see it now but much greater and glamorous.

Alongside Darius the Great, his son, Cyrus’s grandchild, King Xerxes, and his son, Artaxerxes of Persia added new palaces and buildings to the initial plan, all with their specific function. 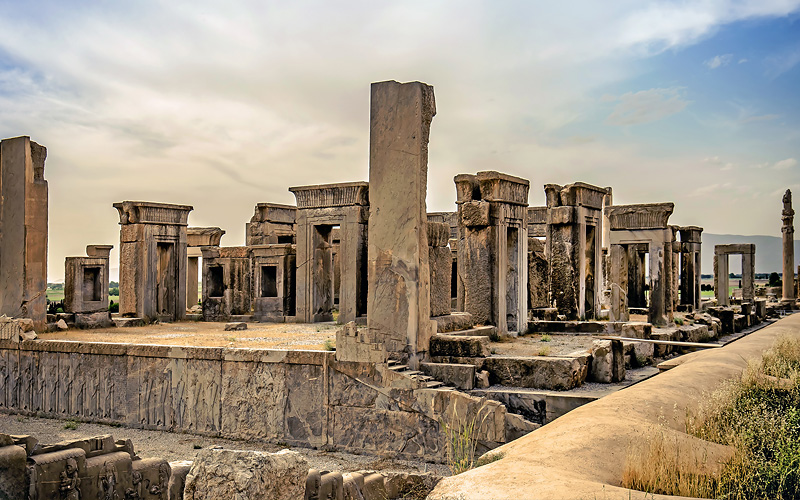 The Gate of All Nations and its famous stairs are the first constructions one sees in Persepolis. Where it is decorated and lithographed with two massive bulls as a sign of fertility and blessing. King Xerxes has epigraphy on the walls of this Gate, starting with the name of Ahuramazda and introducing this gate as a passage for all the nations to come, and then, says with the blessing of Ahuramazda he has managed to add beauty to the construction that his father King Darius started and anyone after him, shall preserve this and continue with the beauty. Isn’t this the message that would bring us all to salvation? Just to make the world a better place, better and more beautiful than what we have received, even by doing little things. Is it too late to imagine what the world would be like if we all respected this wish regardless of who has said it?

The Apadana, Tachara, Artaxerxes’ Palace, Hadish Palace, the Queen’s Palace, Treasury, and finally, the Throne Hall (the Hundred-Columns Palace) are the main halls and building in Persepolis alongside two crossed figure tombs of King Artaxerxes II and III.

Each palace has its unique function and there is much to say about them. For example, the Throne Hall which had 100 columns was shaped like a palm garden out of stones both for the blessing and sanctity of a palm tree (an evergreen tree) and to continue Cyrus the Great’s tradition of gardening and forming Persian gardens. On the entry gates of the Hall is a well presented lithographed image of 100 devoted soldiers who are decussately Meds and Persian, all under the Royal tent, visualizing how the Meds and Persians are one and both equally have participated in the great Achaemenid Empire.

The fascinating staircases of the Apadana Palace, are as if someone took a picture back then from the celebration which archeologists have learned it as Nowruz. Showing off how each Satrap, representative of their nation, baring their gifts, is gracefully directed by either a Median or Persian gentleman to honor the King and receive his blessing and attend the jubilation and rejoicing.

The only thing certain in this lifetime is that everything good or bad, pleasurable or painful, mighty or week, comes to an end at some point, sooner or later, but unexceptional! Persepolis, the “wealthiest city under the sun,” Darius’ utopia, met its dark days as well. When one mighty, capable man from Macedonia united Greece, the Achaemenid dynasty was rushing toward its ruin by immersing in its comfort, wealth, neglect, and the lack of that visionary that its founders had.

It was quick. Three main lost battles and then the whole Persian Empire was his, Alexander’s. After the depredation, forage, and killing every bearer of Persian blood, burning down Persepolis was necessary. It is not something to hold against him, Greeks and Persians were blood enemies. Persians had their time in the sun and now it was Greece’s turn to shine. Thus, He burnt Persepolis down so that any soul from miles away would know one Empire, perhaps the greatest one of all has fallen. That old and ancient glory, suffering for so long had closed its eyes for good. It was time for a new reign.

However, the magnificence was discovered again. The phoenix rose from the ashes and all that effort and labor, that one special vision which was doomed to be forgotten and vanished, was still alive and had enough power to wait. Wait to be revealed again. When the excavations on Persepolis started in 1931 no one would believe what they were excavating till they were done, till all the tables and epigraphy were read and the architectural designs were figured out. Connecting the dots from Persepolis to other pieces of evidence from the Achaemenes history, the main purpose and function of this city were recovered and the world remembered it once more. People came to visit and it was worth to be mentioned as one of the UNESCO World Heritage Sites.

A city started with a vision and ended up as a legacy. So we may lose things, have precious moments, and loved ones are taken from us, but nothing is ever really forgotten. Persepolis stands to be a good proof of that.