Four season Iran, that is so similar to a beautiful painting, a vast and fertile land with wide range of biodiversity and different climatic conditions which promotes prosperity of agriculture as the primary sector of economy and also as one of the most influential factors in Persians food diversification, thanks to the production of different agricultural products with superb quality that is used for the purposes of exports and domestic consumption.
The difference between food and nutrient is determined on the basis of socio – cultural values of every country, for instance in Iran food is defined based on cultural – social and of course religious values, that means what is nutrient is not necessarily food.
Iranian food culture is rich and has a long history that also represents ethnic differences. Iranian cuisine is an art because requires training, practice, patience, taste and of course is time-consuming but the result is eye-catching and mouth-watering.

Type: Main course
Meal: Lunch and Dinner
Origin: Traditional Food of Gilan Province (in the north of Iran) but it is made in the most parts of Iran.
Iranian has cooked khoresht-e-fesenjan from 2500 years ago. In ancient Iran, cooking this food was a symbol of ending winter and coming spring. Accordingly, it was formal food of Nowruz.
This is a very delicious but expensive food because of its ingredients, so it is a ceremonial food. The main ingredients of this food are:
– chicken or duck
– ground walnut
– pomegranate paste (squeezed juice)
In central parts of Iran sometimes meatball is used instead of chicken in this stew.
Khoresht-e-fesenjan is served with saffron rice (white rice that is flavored with the spice saffron).

herbs stew
Type: Main Course
Meal: Lunch and Dinner
Origin: In terms of etymology “Ghormeh” is derived from Turkish word “Kavurmak” that means “braised” and sabzi is a Persian word for herbs.
In the distant past “Ghormeh “was prepared in provinces where animal husbandry was very common and the weather was so cold. Meat of the freshly slaughtered sheep along with its fat (and without bones) was cooked on a very low temperature for hours. Then well-cooked meat was placed for example in a clay pot and stored in a cold place to use later. But because fat and salt were high in the meat of Ghormeh, it should be mixed with vegetables and abundant onions to moderate its fat and salt. That’s why Khoresht-e-Sabzi is also called Khoresht-e-Ghormeh Sabzi.
As a result, meat is one of the main ingredients for preparing this stew. We generally use mutton but sometimes veal. Other ingredients are:
– Red kidney beans or pinto beans
– Finely chopped herbs including parsley, Cilantro, Chives and a Little dried fenugreek powder
– Dried limes (Limoo Amani)
– Onion
– Ground Turmeric
This food is served with white or saffron rice.
The title “Nation Dish “for this stew seems right, because it is a very popular dish in Iran. Ghormeh sabzi among other Iranian foods has unique feathers.
– Given that it’s history trace back to 500-2000 years ago but its recipe unlike most of the Iranian foods not only has not changed but also has gone along the modernity path and the result is a delicious food. A combination of two popular foods, pizza Ghormeh-Sabzi, that the first time was introduced by Hossein Arbabi. can you imagine these two foods together?
– And finally the last Saturday of each November, usually two days after Thanksgiving day in the United States was declared as the international Ghormeh Sabzi day, by Iranian expats. An unofficiall holiday to familiarize people of different cultures with Iranian cuisine and history.

Type: Main course
Meal: Lunch and Dinner
Most of the people believe that khoreshet-e- gheymeh is the king of Iranian stews. Even though it is an old, original and favorite food, there isn’t an accurate history about the origin of this food.
In the Dehkhoda Dictionary (the largest comprehensive Persian dictionary ever published) “Gheymeh “is a Turkish word that means minced meat or meat that has been cut into small pieces.
Meat (lamb but sometimes beef) is one of the main ingredients of this food and must be cut into small cubes and that is why this stew is called “Khoresht e Gheymeh”, unlike most Iranian foods that usually have larger pieces of meat.
In Lahijan (a city near the Caspian Sea and the capital of Gilan Province, Iran), this food is made with fried minced meat. Other main ingredients are:
– yellow split peas
– dried limes (limoo Amani) that is traditionally used in the whole version in this stew
– tomato paste
– cinnamon, saffron.
It is interesting to know that when this stew is garnished with French fries is called the “Classic Geymeh” but when we use fried eggplant slices in it, called “Gheymeh Bademjan “. both types of Gheymeh is served with white or saffron rice.

Rice cultivation in Iran has a long history. Regardless of when or how rice was brought to Iran, it has been the second most important staple food crops after wheat like many countries of the world. there are beautiful green velvety rice fields with wonderful aroma in different parts of Iran but the principal rice producer provinces are northern provinces especially Guilan that is known as the foremost rice producer of Iran.
Rice in the form of whole grain, broken rice and rice flour is used in the vast majority of recipes.
In Iranian cuisine rice is a main ingredient that is used for preparation different kinds of main meals, soups/pottages and sweets/desserts.
So it can be used in every meal that shows its versatility, popularity and also its special place in Iranian culinary.
Rice based foods are cooked in different parts of the world but when you travel to Iran, you can experience a unique taste of Persian rice that is cooked based on a wide range of recipes according to diverse ingredients that is used in different parts of this beautiful four season country.
Here in Iran, among rice based foods, Chelow and Polow are the most popular ones, two inseparable parts of Persian cuisine.
Both of them have a delicious part namely Tah-Dig, that is a crispy crust at the bottom of the rice.
Don’t neglect it , because it has so many lovers among Persians and Persian food lovers!

Chelow means cooked plain white rice without additional ingredients that is served as an accompaniment to different kinds of stews and kebabs. Chelow is made of long grained with rice preferably Iranian rice with exceptional aroma and flavor.
For preparing chelow , rice is rinsed , soaked in salted water , parboiled , drained and finally steamed by adding a little amount of oil.
Following this method results in fluffy, separated and non-sticky rice grains.
A platter of chelow that is sprinkled with a layer of rice soaked in brewed saffron alongside of different kinds of Iranian delicious stews and kebabs make a spectacular scene that you can see and enjoy its unique taste when you travel to Iran. 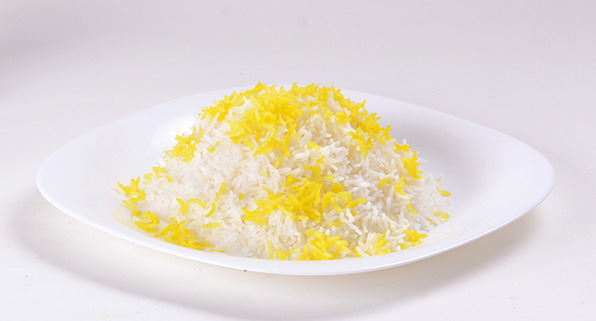 The word “Polow” in Persian is equal to “Pilav , Turkish spelling “ “Pilaf , Us spelling” “Pilau , Uk spelling”. Polow means white rice that can be is mixed with a wide range of ingredients such as meat, beans, vegetables, dried fruits, spices or a combination of them according to the recipe and regional differences. These ingredients are added in layers or mixed with rice either at the parboiling stage and then steamed or mixed with steamed rice.
Anyway by using each of these methods, what you have at the end is a delicious and colorful polow. 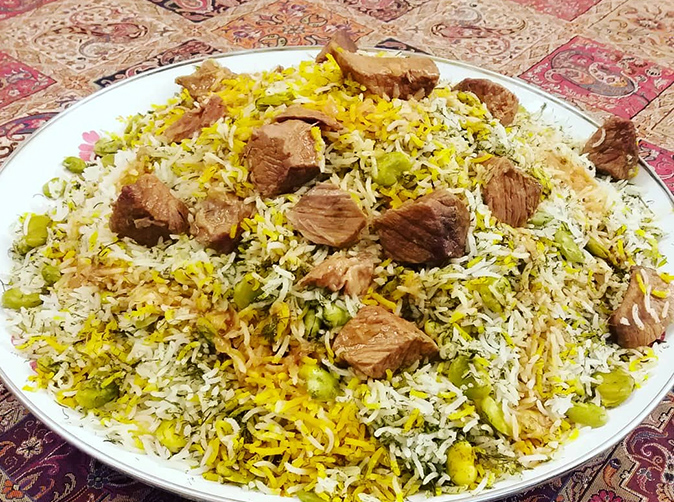 Persian style for preparing rice based dishes has differences with other parts of the world and the most important one is about Tahdig that is literaly means “ the bottom of the pot” , bottom in Persian means “Tah” and pot means “Dig”.
Because in Iran in the bottom of the pot of Chelow or Polow there is an appetizing crispy crust, the same popular Tahdig , that is formed during the steaming stage and has many lovers all over Iran .
There are different types of common and also local recipes for preparing a deliciously crispy Tahdig , but the rice Tahdig is the simplest and readily brown crispy base of the Persian steamed rice.
The most popular ones in addition to rice Tahdig are those that made by use of :
– A mixture of rice , yoghurt , saffron and egg.
– Thinly sliced of peeled potatoes.
– Breas (mostly Lavash that is a type of soft , thin bread ) but flour tortilla can be used instead.
– Lettuce leaves.
Interestingly, In Iran spaghetti and other types of pasta is steamed somewhat like rice with slice of potato as Tahdig , that I bet you can not resist the temptation to eat this type of Tahdig. 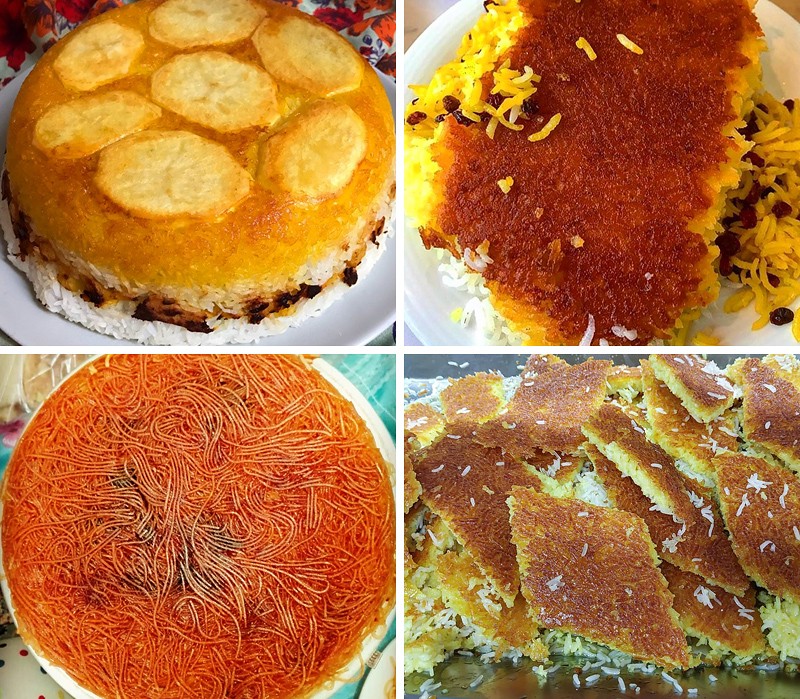