It is not about the stone-bricks, nor the materials, it is not even about the incredible architecture which gives the place quite an air. Pasargadae is all about him. His very existence, his character, actions, and his charisma, father of Persia.

When it was only killing, conquering, and plundering that mattered, when all those actions were considered things to be proud of and they were expected from a mighty ruler, there was one man who changed the game forever.

Who could walk in Pasargadae without knowing him? There are great qualities to the place, yes! but behind all the palaces and marvelous pillars and the famous gardens, one is in presence of a brilliant man. A person who had all the means to be great and use his immeasurable power for his own glory but tried a different method chose a new path and established a fresh world where peace was its theme.

In Greek mythology, when a God or Goddess has a baby with a human, the child is destined to achieve greatness. They may face a certain fate, suffer along the way and pay the ultimate price but they will be remembered and thus, they will never die; Half-bloods and semi-Gods like Hercules, Achilles, and many more. 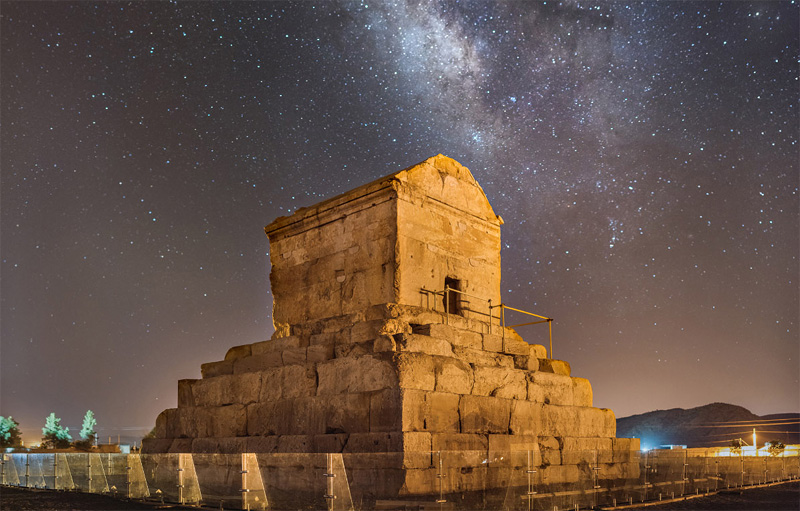 When the dreams have ended and hope becomes a rare jewel, never to be found, just remember them. Time could be a funny thing. Time could be nothing but an illusion. So as Josh Groban beautifully composes, these Heroes are the stars that keep burning so brightly, they are the last light, to fade into the rising sun. They are that voice in the cold wind, that whispers and if you listen, you’ll hear them call across the sky and as long as they could still reach out, and touch you, they will never die.

Cyrus the Great was also a half-blood. But not in the mythological way that Greeks describe. He was from two tribes. Though they had the same root, their perspectives and worldview differed. The Medes were the first of the Aryans to start taking over Iran’s plateau. They gradually took the power from the Elamite and founded their own realm.

The Pars (Persians) family of the Aryan tribe subjected themselves to the Medes. Medes were humble and satisfied with their small territory but had great kings such as Cyaxares who ended the Assyrian Empire and became the first to add Mesopotamia to Persia. But as the way of history is it all came to a week Median ruler to take that kingdom down with him.

Of course, the Medes never fell, it reappeared again once Cyrus the great crowned himself king of the Medes and the Achaemenid. He was from both tribes, both of his grandfathers were kings, he came from a strong royal bloodline. He had the Medes’ humble heart and the Persian ambitious brain. He was destined to unite Persia, achieve greatness and so, live on forever as an immortal soul in the hears of those who looked up to him. Those who cherished and loved him. Cause he just didn’t found the Achaemenid Empire but initiated Persia with a gentle role model of a King.

The coronation took place in Babylon; October 29, 529 B.C. The famous Cylinder, the world’s first Declaration of Human Rights was written. He freed the Jews, he earned the love and respect of the people, and Babylon became one of the capitals of the new Empire.

However, Pasargadae was home. Located within the land of his ancestors and where his father ruled. So it was only right to come back, gloriously, and build it in a way that was both elegant and graceful for his realm.

Pasargadae is placed in a high plain 1900 meters above sea level, in a mountain fence. The residence palace undoubtedly shows the influence and Greek architecture. It seems that when Cyrus conquered Sard (the capital of Lady, a city in western Turkey today) in 545 BC, he was greatly influenced by the marble buildings of the Lady kings. He may have employed several Lady architects for Pasargadae. The palaces have attractive proportions, dark and light marble stones, especially in the foundations that catch the eye.

From the archeology documents and comparing the design plan and how the gardens were placed, it is safe to say that Cyrus the Great was behind all the designs and supervised them himself, some gesture that Darius the great picked up later for his work of genius; the Persepolis.

The most important constructions in Pasargadae are the three palaces (S, P, and the gate palace), the royal gardens and their irrigation canals, and last but not least, Cyrus the great’s Tomb. 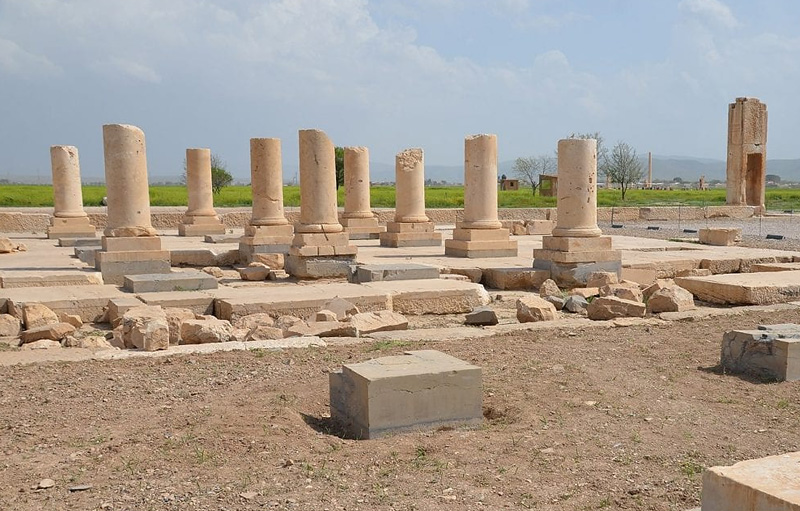 Comparing Pasargadae to Persepolis, this site looks like a student worker who had a great potential to be the master, started there and gained their experience, and shined with building the Persepolis. Pasargadae did not have the strength of Persepolis. It’s engraving never reached that perfection and that is why what is left of it is very little.

The Royal Complex is located in the center of Pasargadae and consists of some palaces that are originally located within the gardens also known as the “Four Gardens”. Pasargadae Royal Gardens are one of the oldest gardens in Iran. This garden, which was called the Paradise of Cyrus, is considered the basic model of Persian gardening. The garden was full of various trees, colorful flowers, and birds. Cyrus turned the area into a unique campus with his own taste and opinion.

The Public Hall (Palace S) was built around 539 BC. Its columned hall has two rows of four columns. The base of the columns is made of black stone, and their body is made of white limestone. Some of the reliefs of the gates have been preserved, which show the bodies of humans and demons.

The palace of Cyrus (Palace P) was built between 530 and 535 BC. The columned hall of the palace has five rows of columns and six columns in each row, and its magnificent foyer in the southeast is 75.5 x 9.3 m.

The Gate Palace is located on the eastern border of the main courtyard has frames of a famous relief. A human-like body with wings, who is wearing a sort of a galea with horns. Now here’s the figure which Abul Kalam Azad used to prove his claim that Dhu al-Qarnayn, mentioned in the Quran is actually Cyrus the Great. This rose many arguments in both historical and religious criteria.

Not that before he was born he wasn’t a man that great things were expected from, but also after his death he still managed to impress with his character and actions. He freed the Jews, respected the great Gods of Babylon, there are some signs of him following Zoroaster, and finally, Allah talked about him.

No racism, no totalitarianism, no suppressing people for his own sake, and then dying on the battlefield to save those who sought refuge in him and asked for his protection, how magnificent a man could be? It wasn’t his Royal bloodline nor his power to establish the greatest Empire the world has ever seen, it was his decisions, his choices which made him who he is.

The Tomb of Cyrus the Great was probably built before his death and by his own order. Soon after his death Pasargadae became the sacred state of the Achaemenes and was well preserved. Though after Persepolis the political importance of Pasargadae faded gradually, still, it was where all the coronations took place and kept its air as a respectable center where Cyrus the Great formed everything they stood for.

2500 years have passed. The glorious times have been over but the human race still is fighting for its rights. The right to be considered as equal as any other, the right to choose freely where to put their faith and whom to love, where skin-color, land of birth, and religion preferences matter no longer and won’t be held against a person.

When were are faced with these issues, when we have to decide to choose between the right way and the easy way, there is a voice that echoes through time and if we listen carefully we could still hear him say:

“I am Cyrus, King of the world, great king, mighty king, king of Babylon, king of the land of Sumer and Akkad, king of the four quarters, son of Cambyses … whose rule Bel and Nabu cherish, whose kingship they desire for their hearts, [with] pleasure. When I well-disposed, entered Babylon, I set up a seat in the royal palace amidst jubilation and rejoicing.” 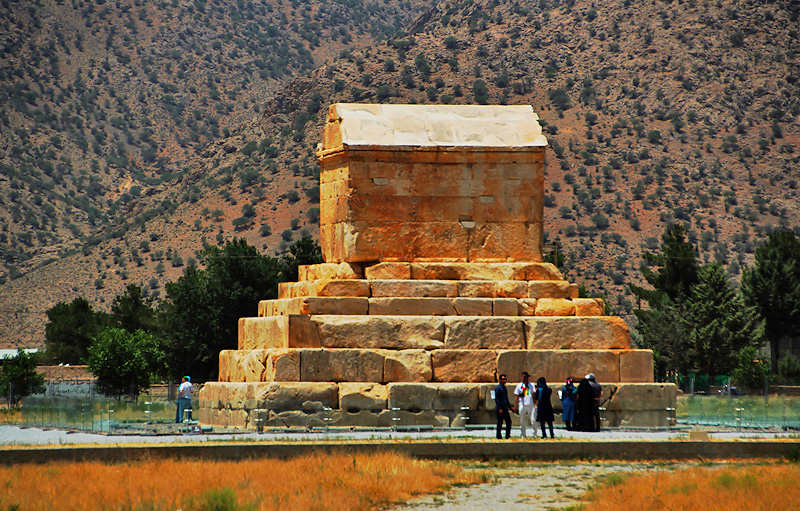