You will visit the most magnificent of the ancient treasuries of Iran in this tour. You will travel into the past when you experience the historical sites at Bishapur, Persepolis and Pasargadae. Come with us and feel the Persian traditions in the old cities of Yazd, Natanz and Kashan. We welcome your arrival. Day 01: Arrival – Tehran Arrival at Tehran airport where you will be welcomed by a Gashttour representative then transfer to hotel & rest. O/N Tehran Day 02: Tehran – Shiraz (1:15 Hours distance by plane) After breakfast, we shall visit the Sa’dabad Complex palace. Then, visit Archaeological & Islamic Art Museums. The pre-Islam archaeological museum covers Persia’s history from the 5th millennium BC to 648 AD while the Islamic art museum provides a display of Islamic works of art. Then to Golestan palace complex dating from the 18th century AD and later the Jewelry museum to view what is probably the world’s finest collection of precious stones collected over many centuries. Finally in the evening, transfers to the airport and fly to Shiraz. Meet and transfer to hotel. O/N Shiraz 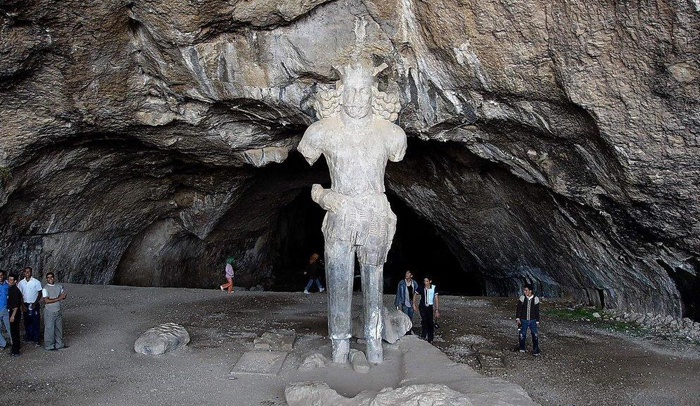 Day 03: Shiraz – Bishapur excursion – Shiraz (280 Kilometers distance) [Round Trip] An early morning drive to Bishapur, an ancient partly excavated Sassanian which was built to commemorate the Persian victory over the invading Romans. Close by Bas reliefs on the rock walls of Tang- e Chogan depict scenes of Sassanian glory. On our return drive to Shiraz there may be an opportunity to visit the Qashqai nomads on their annual migration to summer pastures. O/N Shiraz Day 04: Shiraz – Music We will visit the Eram and Naranjestan Gardens, Nasir al-Mulk Mosque, Hafez and Saadi mausoleums, Vakil mosque complex and the most astonishing mirror decoration of the Ali Ibn Hamza Holy Shrine. O/N Shiraz

Amazing Iranian Night Music This evening we have the chance to experience true Persian culture. The entertainment includes a performance of classical music played on traditional instruments while we enjoy a delicious local cuisine dinner. It is highest taste of Iran culture with a sermonic session of Iranian classic music in local house with delicious Iran cuisine. Iranian classic music draws back to thousands year ago. In the Persian classical music dates back thousands of years and during the times of the Elamites (2500 to 700 BC) and the Achemenians (500BC) the accompaniment of music during religious and ceremonial parades was paramount. Later during Sassanian times (200-650AD) great musicians including Bamshad, Nakisa,Azad and Barbad made significant contributions. During this memorable evening the programme includes ancient music composed by Farabi and Shirazi and played on the instruments Saz, Setar and Zarb and a selection of Persian poetry of Mowlavi and Hafez.

Day 05: Shiraz – Persepolis – Necropolis – Pasargadae – Isfahan (485 Kilometers distance) We depart from Shiraz driving via the Quran Gate and 40km to the north we stop at the magnificent archaeological site of Persepolis, the ceremonial palace of the Achemenians which dates from 550BC. close by we visit Necropolis the site of four cliff face tombs of Achemenian Kings including that of Darius the Great. Further on we stop briefly at the earlier Achemenian ceremonial centre where stands the impressive tomb of Cyrus the Great founder of the Persian Empire. Continue to Isfahan. O/N Isfahan Day 06: Isfahan In the morning we will visit Naqsh-e Jahan square, a huge open square in the center of Isfahan. The square periphery is marked by outstanding Safavid buildings which include the Ali Qapu palace, the Imam Mosque, the Sheikh Lotfollah (ladies) mosque and to the north the expansive bazaar where we can see artisans crafting metal work, Persian miniatures, printing intricate designs on cloth and other activities. In the afternoon, we will visit Si-o-Se Pol (thirty three arches) and Khaju Bridge spanning the Zāyandé-Rūd River. O/N Isfahan 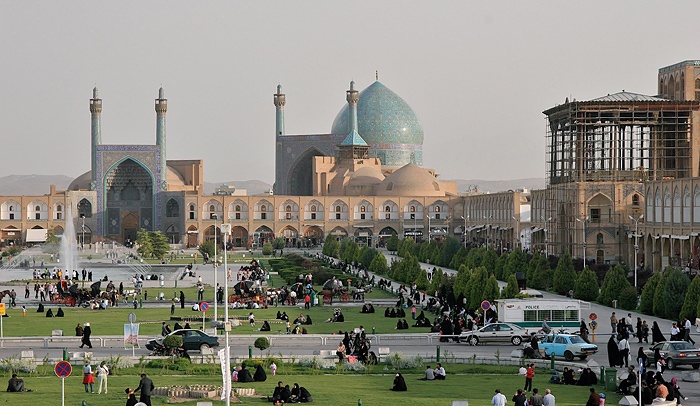 Day 07: Isfahan We will visit the Vank Cathedral and adjoining museum in the Armenian quarter of Isfahan and later see the Friday Mosque, shaking minarets Mosque and the Safavisd reception palace of Chehel Sotoun ( forty columns) where huge frescos depict memorable events of Safavid times. O/N Isfahan Day 08: Isfahan – Kashan – Abyaneh (310 Kilometers distance) After breakfast we drive northwards to Kashan where we visit the Fin garden complex, the Agha Bozorg theological school and bazaar. Kashan is famed for its fine carpets and many restored traditional merchant’s houses. We continue to the ancient village of Abyaneh. It is unique ochre colored mud brick constructions and the colorful dress of its inhabitants. O/N Abyaneh Day 09: Abyaneh – Yazd (430 Kilometers distance) Today we drive to Yazd reputed to be one of the world’s oldest cities and often referred to as being like a living museum. We will visit narrow alleys of mud brick and plaster, see the tall wind towers which provide unique and effective cooling systems in this desert climate. The Friday mosque dates from the 14th century and having the tallest minarets in all Persia. Silk weaving workshops may be seen where exquisite brocades are still made on traditional looms. O/N Yazd

Day 10: Yazd – Kerman (365 Kilometers distance) Today we shall explore this ancient city and visit a Zoroastrian temple where a sacred fire has been kept burning for hundreds of years and is now a Zoroastrian pilgrimage center. This is an opportunity to learn about Zoroastrianism the religion of ancient Persia and which was followed until Arabs brought Islam to Iran. On the outskirts of the city we visit the Towers of Silence, burial locations of the Zoroastrians. In the afternoon drive to Kerman. O/N Kerman Day 11: Kerman – Bam – Mahan – Kerman (385 Kilometers distance) [Round Trip] We shall visit the remains of the extensive mud brick citadel of Bam. En route to Bam at the small town of Mahan we visit the magnificent mausoleum of Shah Nematollah Vali one of the great Sufis. Close by we also visit the terraced traditional garden of Shahzadeh. O/N Kerman 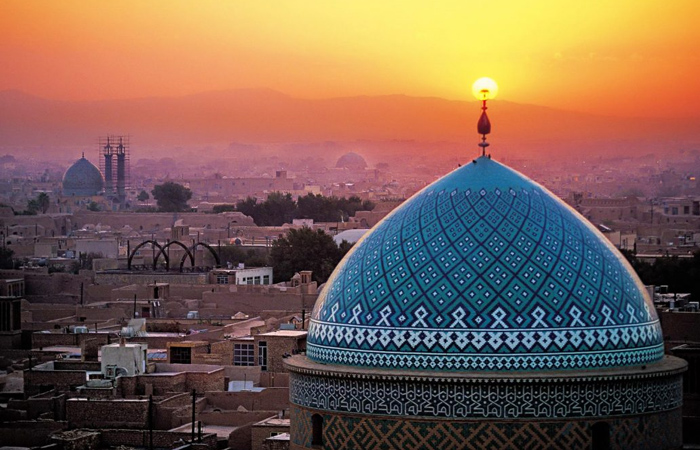 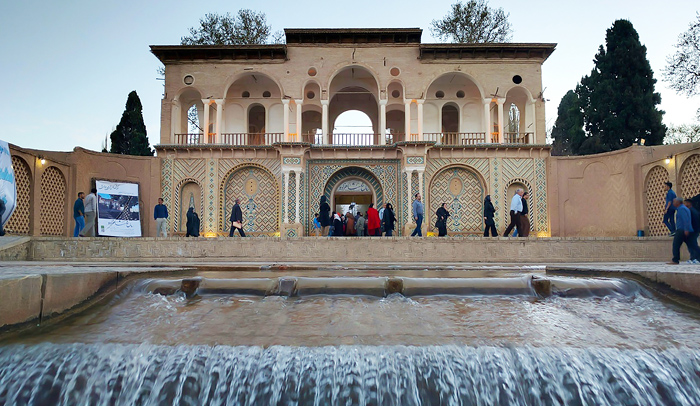 Day 12: Kerman – Tehran (01:30 Hours distance by plane) Kerman is famous for fine Persian carpets. There we will visit the 17th century Ganjali khan complex which includes one of the most interesting and ancient bazaars in Iran. These a restored traditional bathhouse has a display of wax figures depicting the functions of the bathhouse and a traditional tea house. In the afternoon fly to Tehran. O/N Tehran Day 13: Tehran After breakfast, we shall visit the Sa’dabad Complex palace. Then, visit Archaeological & Islamic Art Museums. The pre-Islam archaeological museum covers Persia’s history from the 5th millennium BC to 648 AD while the Islamic art museum provides a display of Islamic works of art. Then to Golestan palace complex dating from the 18th century AD and later the Jewelry museum to view what is probably the world’s finest collection of precious stones collected over many centuries. An afternoon visit to the Tehran famous mall centers and Jamshidieh park where we can mix and speak with the local people. O/N Tehran Day 14: Tehran – Departure Transfer to Tehran Intl airport for your return flight.