Fars was generous enough to rise the two most powerful dynasties in Iran’s history. These two also gave Fars the credit it deserved and so, Fras became the whole country, Pars, Persia, and Persian all sour out of this geographical land’s nest, in the center of the plateau.

The Achaemenid is so well-known. They have a decent figure and what they left behind as their legacy was not particularly limited to one nation. Though they gave the Persian Empire its identity as an Iranian or to be more accurate, as an Aryan tribe mark on the world, by gathering all nations of the world in one place and giving them a fair share of contributing to the Empire, they had a unique kingdom where not only the Persian but also other nationalities were a part of it. Therefore, it was a universal government as well as a Persian one.

However, they were gone when their time came and for a while, foreign rulers tried to govern the Persian land, not knowing how they managed to give every state to an Iranian royal and ancient family before the Parthians gathered up and drove them away from the land they did not belong.

No matter how strong and wise the Parthians were and regardless of how they were able to compete with the newborn Roman Empire and gain glorious victories against them on the battlefield, and how they formed a war strategy that is called still after their name, there was an enemy within the land of Persia who had a higher claim. 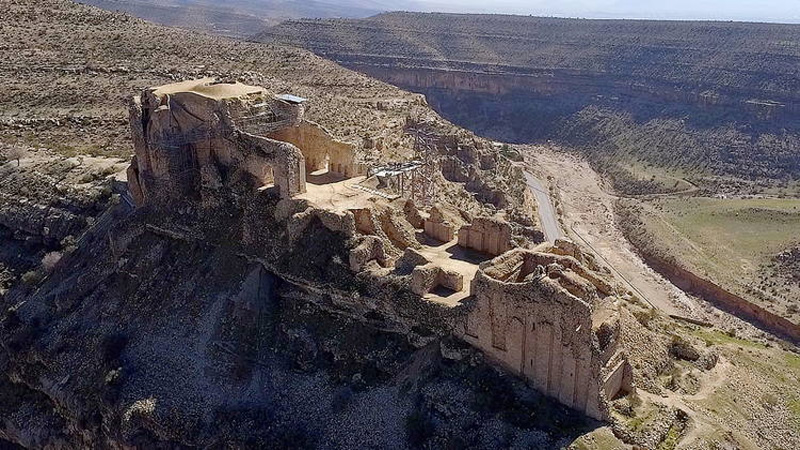 It was time for religion to start its absolute role in Iran’s history, hold on to its core, and never let go. At first, it was Zoroastrianism, and then Islam. But what gave the religion its privileges were the men behind it who sought power and found that there is no better a weapon than religion. Because when God has anointed someone to rule who would dare to challenge them?

Long before this divine legitimacy became an issue, Iran’s mythology declares that only the kings who had Khvarenah were fit to rule. This Khvarenah could sometimes be seen with a naked eye. For instance, if a king passes a roaring river safely (Cyrus the great, Fereydun son of Abtin and Kay Khosrow) the Khvarenah is with him/her if there are no droughts during his/her reign they are blessed with the Khvarenah. Heroes and Heroines could also possess a type of Khvarenah specialized for them.

As this mythology came to co-exist with what Zoroaster presented as the holy religion of Zoroastrianism, it was Ahuramazda who bestowed upon the people of his land kings with Khvarenah.

Getting back to our article we must say these Parthians were not prejudiced enough on the Zoroastrianism religion. They gave people the freedom to choose what faith they wanted to follow exactly how the Achaemenid had religious negligence. What seemed to be an honorable act and policy became a pretext to destroy them. 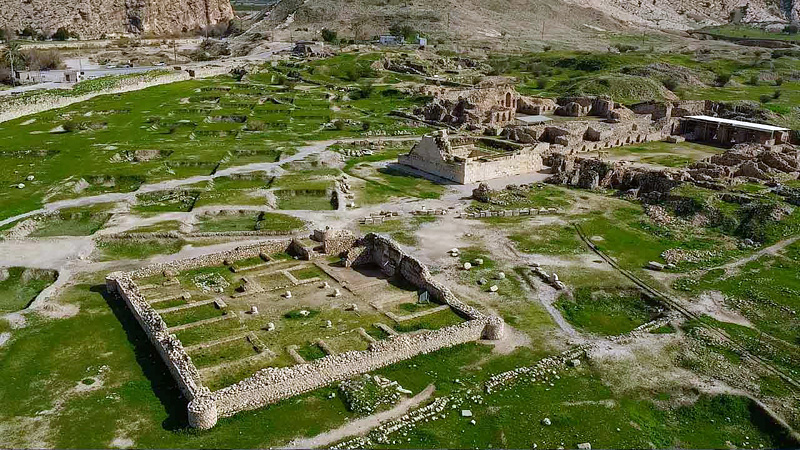 Zoroastrianism was an ancient monotheism religion but was never announced as an official religion, that one united faith one ruling dynasty submits itself to its rules and religious jurisprudence. It was the clergies’ (the Magi) turn to seize power and create kings with the claim of being the shadow of God on earth to place religious orders in government priorities. The foundation of the Sassanid dynasty and the spirit of their government was this basic but game-changing interpretation.

Once again, Fars became the homeland for a family who had the potential to unify all the Magi and their disposals, saying that the Parthians are neglecting Ahuramazda’s wishes, the God’s law is not being respected and therefore they are the enemy of God and should be overthrown.

Ardashir son of Babak, was the man of action. With the power bestowed upon him by the Magi, he started an uprise to unify all the state of the Persian Empire which was left from the Achaemenid legacy. He succeeded and started a new reign at 224 A.D. and for the first time in history, the name of “Iran” appears as the name of the country he was about to establish. He created a unified country with two elements, nationality, and religion.

His son, Shapur was a true soldier, devoted to both his country and his faith and as King of Kings, he obtained the position and rank which Darius the Great had in the Achaemenid dynasty. He strengthened the Empire, defeated the Roman Empire more than once, and built well-engineered cities. With the wealth, he brought into the Empire, many industries, businesses, trade markets started to develop as well as creating an environment for the artists who were looking to show their potentials. Thus, everything was ready and prepared in his territory (Iran-Shahr), especially Fars, to withhold another world legacy that later, UNESCO registered on its list.

Firuzabad, Gor or Ardashir-Khwarrah, is a city located south of Shiraz. The city is surrounded by a mud wall and its initial design was circular. The original city of Gor dates back to the Achaemenid period but it is said that the city and its belongings were demolished by Alexander.

Fars never grew old of surprising and so centuries later, Ardashir I, the founder of the Sassanid Empire, invigorated the city before it was ransacked again by one other bloodthirsty enemy. He founded his new capital city on this site and called it -with that sort of pride only the Sassanid possessed-; Ardashr-Khurrah (or Ardashir-Khwarrah), the glory and legitimacy of Ardashir.

Ardashir’s new city had a circular plan and was so accurate in measurements that it could have been used as a compass according to Ibn Balkhi, the Persian historian. The city had four gates; the northern one was called the Hormazd Gate after Ahuramazda who was now called Hurmuz, the southern gate was the Ardashir Gate, the eastern one was the Mithra Gate, and the western gate was named after one glorious god, the vanguard force of victory, Wahram.

The Palace of Ardashir built in A.D. 224, also known as the Atash-Kadeh (fire-place), is a palace located on the slopes of the mountain nearby. King of Kings Ardashir I of the Sassanid Empire, is hence, of important significance in Persian history.

The structure contains three domes, the first domes in the architecture history of Iran and therefore making the palace considerably larger and more magnificent than the ones built before it. Like the name of the city, this palace was also designed to present the royalty image that Ardashir I as after which is why from the architectural design we get the notion that it was more of a place of social gathering where guests would be introduced to the imperial throne.

Doesn’t this purpose sound familiar? Ardashir was after what Darius did with Persepolis. Or to give another example of how Ardashir saw himself and the Empire he established as the Achaemenid’s true successor, we must mention a picturesque pond that was fed by a natural spring, in connection with the Persian goddess of water and fertility, Anahita. The spring was there to feed a royal garden, just as how Cyrus the Great had his garden built in Pasargadae. Last but not least, the style of the interior design is comparable to the Tachara palace at Persepolis.

As the rule of all Empires and kingdoms, son after father, continue to glorify what they have inherited. Shapur I started something completely new, a city named after the Gog and himself; Bishapur. Founded on the ancient road in 266 A.D. between Fars and Elam which also linked the Sassanid capitals Estakhr and Ctesiphon together. It is now located south of Kazerun County of Fars Province. Bishapur was built near a river crossing and at the same site, there is also a fort with rock-cut reservoirs and a river valley with six Sassanid rock reliefs.

The second Sassanid king imposed a triple defeat on the Romans, killed Gordian III, captured Valerian, and forced Philip the Arab to surrender. He needed a new capital that would measure up with his ambitions. Outside the city, Shapur decorated the sides of the Bishapur River gorge with huge historical relief commemorating his triple triumph over Rome. The city has a rectangular plan with a grid pattern of regular urban streets, resembling Roman city design. This design was never repeated in the architecture of Iran. 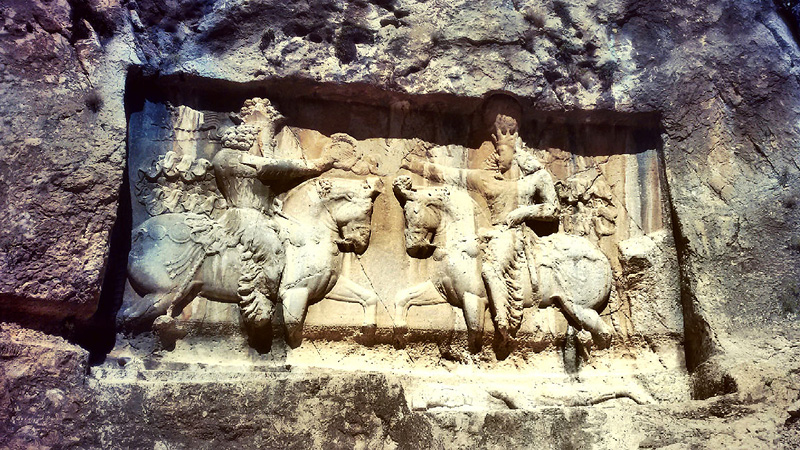 For sure, the magnificence of the city rises not only from Shapur’s victories and designs but also from a spiritual awareness that surrounds the place. Honoring the hierarchy of gods and goddesses during the Sassanid reign became an inseparable part of their religious ritual. One famous figure, adored and praised in Avesta, is Anahita who has a temple of her own in Bishapur.

The temple is lower than the main level of the city and it can be reached with a series of stone stairs, a square temple with stone walls. It was designed so that the water of the river could enter the temple in complete peace on one side, fill the pond on the floor, and after the priests had prayed on it and the prayer ceremony was over, the water would be directed outside the temple with the same elegancy and peace as before, for public consumptions. The silence of the temple is the only difference between it and other places in Bishapur. It can be said that this is the only place where the driven out Anahita still takes refuge.

One other place in Fars that was so uniquely chosen by the Sassanid King of Kings was Sarvestan. The Sassanid monument of a Sassanid Palace (Kakhe Sasan) is located in the southeast of the city 90 km from Shiraz, experts believe the monument was constructed during the Sassanid reign (224-651 A.D), and it was either a governing palace or a Zoroastrian fire-temple.

It is believed that King Bahram V (420-438 A.D). was the one who ordered this place to be built amid a beautiful Cypress garden. As evergreen trees were considered sacred and they were the sign for Ahuramazda’s immortality, building anything near them would assure the construction’s perpetuity. Maybe this is the reason why while all the gardens are gone through the roughness of time, this small palace or fire-temple still stands and creates an astonishing landscape a scenery especially at nights with the combination of the dark blue-purple sky and bright stars.

The Sassanid archaeological landscape of the Fars Region is too valuable. Not only because of the important role it played in Iran’s history but as a reminder of how two pillars, nationality, and religion both aroused from the same land, created what seems to be the Persian soul, the only two elements that have the power to unify the people were discovered and brought into action by the Sassanid family of Fars.