There is always that first step, that first look, that first element that causes attraction and everything just starts. Like how the Big Bang created life. Like how the most famous writers start their book, and just with that very first word or sentence you are not yours anymore, body and soul you surrender, give in and that is when you could feel something greater than you, mesmerizing and beautiful will happen.

Try to stand in the middle of this square, embraced by a palace, two perfect mosques, and a grand bazaar. Hopefully, if you catch the chance to be alone, you will immediately see yourself travel back in time. The Square warms its way into your heart and that feeling of witnessing something grand happening will eventually present itself to you.

Though Isfahan was an important district in the glorious times of the mighty Empires of Persia, it was when Shah Abbas Safavid (Abbas The Great, 1588-1629) traveled from Tabriz –the first capital of the Safavid dynasty- into the middle regions of Iran and found Isfahan to have the greatest potentials for his intentions. 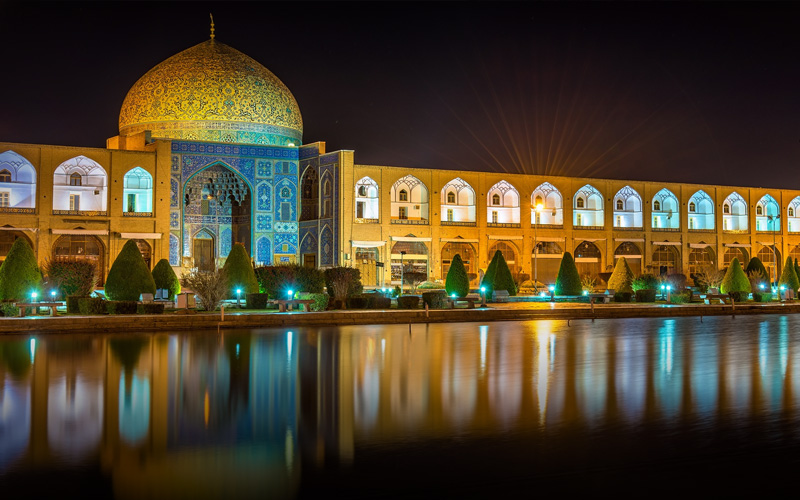 Iran’s history is specifically divided into two main periods; Before Islam when the Achaemenid, Parthian, and Sassanid dynasty ruled, and After Islam when all the local governments or states were all Muslims. Iran introduces the Safavid dynasty as the first dynasty to be both national and religious in the second period, just how the Sassanids were before.

National, because they claimed to be the heirs to the Kayanid Throne (the semi-mythological dynasty, heroes of Persia) and religious because they officially announced Islam as their faith and path, distinctively the Shia sect. These two main factors created a sort of unity which kept the whole territory altogether. Even though there were many battles and some lands were lost, they managed to retrieve them and establish a strong foundation that kept Iran glowing.

At the very beginning edge of the European Renaissance, Abbas the Great raised Iran from the ashes of the Middle Ages, and just like a bird that knew how to fly before but now had forgotten it, he gave it wings to fly and soar again.

To manage such an important and glorious task, he first needed someplace safe from all the invasions from the Ottoman Empire and the Uzbeks. He thought Qazvin was too close to the western borders so he moved the grand Capital to Isfahan where it had a good climate, lots of water resources, strong history, and far away from the Ottomans.

There are many monuments in Isfahan belonging to the Safavid dynasty but somehow, the square of Naqsh-e Jahan has managed to outstand them. Naqsh-e Jahan Square or‎ Maidān-e Naghsh-e Jahān which could be translated into this term “Image of the World”, also known as the Shah Square was constructed between 1598 and 1629 and now is one of UNESCO’s World Heritage Sites. 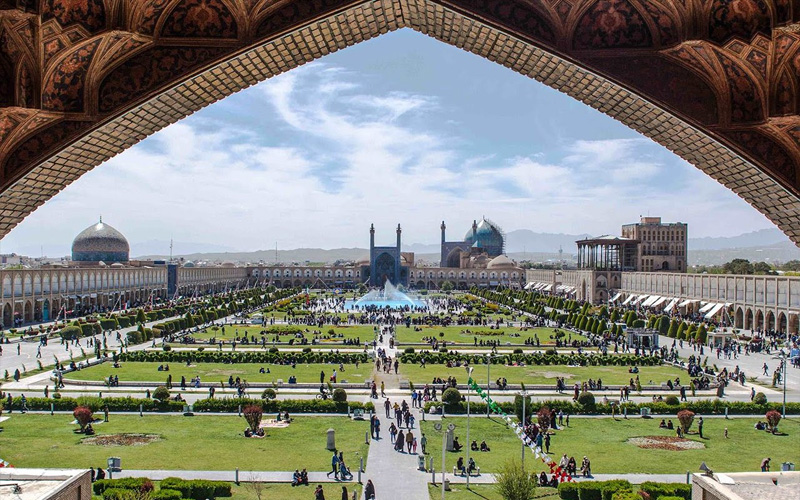 Its physical features are quite spectacular. The Naqsh-e Jahan Square is a rectangular one with 560 meters long and 160 meters wide (440 feet long and 160 feet wide) and it’s the beating heart of Isfahan, both locational and practical. In total, the Square has two-hundred stores around its axes and four buildings: Aali Qapo, the Shah Mosque, Sheikh Lotfollah Mosque, and Qaisaria Gate.

Once upon a time, there was this garden in Isfahan with the name “Naqsh-e Jahan” and a faded space of a square. This garden was home to government buildings and the palaces of the Timurid rulers and Aghquyunlus. By the time that Shah Abbas started to reign, they leveled the surface of the Square and gradually it became much larger than the former one. The names of the two architects can be seen on the entrances of the buildings around the square; Mohammad Reza and Ali Akbar Isfahani.

Jean Chardin the famous French tourist in the 17th century has called Naqsh-e-Jahan the most beautiful square in the world, not to mention the world’s largest field at the time. During the reign of Shah Abbas the Great and his successors, the square was a place for polo, army parades, fireworks, and various royal celebrations, also a place for people to walk, do business, and socialize.

Chardin quotes that up to 50,000 lights were lit in the square during the festivities. A detailed description of this square has been given by famous European tourists such as Jean-Baptiste Tavernier, Pietro Dellavalle, Sanson, Engelbert Kempfer and others who have visited Isfahan during the reign of the Safavids and all of them have praised the beauty of the square and how its greatness could impress you.

There had to be a palace of course. Otherwise, where would the great Shah Abbas have his throne, give his majestic commands, and receive guests who he perfectly knew had to be impressed if not intimidated by his resplendency. At first, Aali Qapo Palace had a simple shape. It is located on the west side of Naqsh-e Jahan Square and in front of the Sheikh Lotfollah Mosque. With 48 meters high and 6 floors that can be reached by spiral staircases. What has made Aali Qapo one of the most magnificent and exquisite works of the Safavid era are the miniatures painted by the famous Safavid artist Reza Abbasi? Artistically speaking, they are masterpieces that enriched -if not initiated- the Persian miniatures. Reza Abbasi, favored by Shah Abbas himself, became a role model and what he started was continued by his students.

The second distinctive feature of Aali Qapo is its bewitching “Music Room” or the “Sound Room.” One of the most splendid innovations in architecture are these rooms. It shows the importance of music as well as the architects’ ability to embody an art that was only meant to be heard.

From Aali Qapo’s porch (Iwan), Shah Abbas watched polo and performances in Naqsh-e Jahan Square. Also in Aali Qapo, he dealt with the affairs of the country and issued the necessary laws.

Aali Qapo was the governmental place, it was there to give and execute commands, but as the Shah was the shadow of God on earth, there had to be a praying place to show his devotion and commitment to the religion which gave him the right to rule. A mosque to gather people. 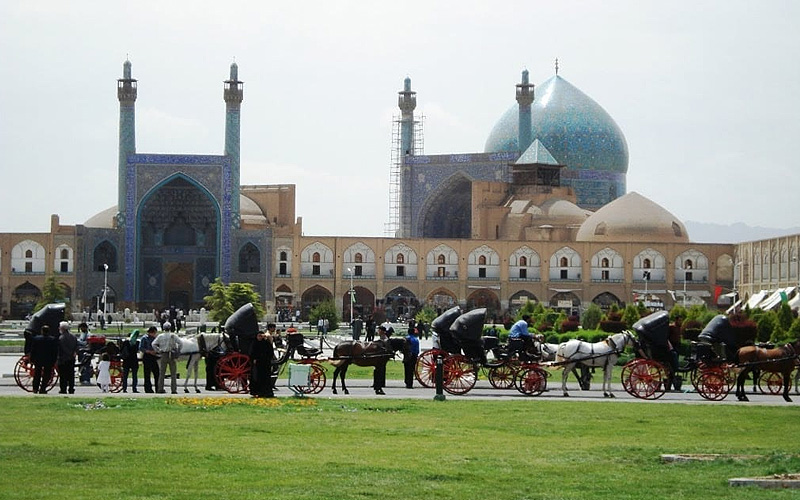 The Shah Mosque is the most important historical mosque in Isfahan and one of the mosques in Naqsh-e Jahan Square. It is considered one of the most significant buildings of Islamic architecture in Iran. This Mosque is an eternal masterpiece of architecture, tiling, and carpentry of the 17th century. The Shah Mosque is located on the south side of the Square. Shah Abbas built the mosque to honor his grandfather, Shah Tahmasb.

The traditions, ideologies, rituals, and religious concepts that have been gradually perfected, the most fantastic elements of the realm, and the Safavid’s emblems were all considered while the Mosque was being constructed. The building itself has an inviting air that calls the outside population to seek refuge, security, and rejuvenation within God, Islam, and Shia.

The Shah Mosque was for the public, but what if the King wanted to have a private section to pray and not to be bothered by anyone else but Allah? When you are a mighty king with an enormous responsibility on your shoulders to lead people both religiously and nationally, you will require such a place. The main reason to build Sheikh Lotfallah Mosque was that Shah Abbas wanted somewhere private, but this does not mean he kept it simple. The Sheikh Lotfallah Mosque has all the means necessary to be considered an architectural work of genius.

During a visit to Isfahan, Louis E. Kahn, a world-renowned architect, mentioned that he could only see such a work in the imaginary world with a substance of gold and silver. Professor Pope fell in love with Isfahan while he was studying about Iran and asked to be buried there. He talks about Sheikh Lotfallah as if it is not made by humans.

“This work can hardly be considered a creation of human hands; You can’t possibly find the slightest imperfection in this building, the dimensions are very appropriate, the design is very strong and beautiful, and in short it is an agreement between a world of excitement and a glorious silence that represents the rich taste of aesthetics that can have no source other than religious faith and heavenly inspiration.”

All to be said has already been saying and though the fate of the Safavid dynasty was not as glorious as Shah Abbas intended it to be, would words or going over the photos of the Square ever be enough? The perfection still stands and as Cheryl Strayed says, “put yourself in the way of the beauty.”