If only we could live forever to know how much our future progeny think about our achievements, whether we have managed to impress them or not? Will they be proud to call themselves our daughter and sons? Have we done anything grand and left a legacy for them to wonder?

When a historical site is called a World Heritage, it means that special site has something within it that has improved or innovated something new to ease not only one nation but others as well.

Khuzestan, a southwestern province of Iran possesses that World Heritage air. If we look at it with the tenderness it deserves, we see that from the very first moment Iran’s plateau became important enough to be recorded by history, residences of Khuzestan brought up the lost kingdom of Elam according to Walter Hinz.

From then onward, Khuzestan has kept supplying Iran all by itself but never asked for anything in return. Fars took all the glory, the homeland of great Persian empires but the natural resources which fueled the empire in the best way it could come all from this particular land. Even now, given the fact that most oil fields are in Khuzestan, confirms its great and sublime role.

Anyhow, the most affluent and only navigable river in Iran, Karun, presented an opportunity to the Achaemenid and the Sassanid Emperors to establish a unique complicated hydraulic system world had never seen before.

Due to agricultural requirements and urban tap water, the Historical Hydraulic System of Shushtar was created.

This hydraulic complex includes bridges, dams, mills, waterfalls, slow-moving canals, and massive water-tunnels that work in conjunction with each other. In the travelogue of Madame Jean Diolafois, -the Evil Queen- a patriot French archaeologist, she was kind enough to mention Shushtar Historical Hydraulic System as the largest industrial complex before the Industrial Revolution. No wonder she couldn’t leave anything behind.

Shushtar Historical Hydraulic System, in terms of architecture and engineering, is one of the most amazing man-made structures left from the Achaemenid era. This huge system consists of various sections, all built so accurately so that the drinking water and the water needed for irrigating the agricultural fields were well supplied.

At first, the initial step was to divert Karun from its route with the help of a large canal and collected behind a dam called Gargar Dam. The water collected behind the dam would then enter the constructed mills and flow into other tunnels and canals. Eventually, this stream of water drifts into a large pond in the complex as waterfalls with enough force to do about anything.

One of the important parts of the Shushtar Historical Hydraulic System is the Mizan dam. This dam is in the shape of a semicircle and is made of stone and mortar on the Karun River. The dam is about 400 meters long and its height reaches 5 meters. Inside this dam, there are ten hatches for water to pass. Each of these hatches directs water in a different direction. However, the main task of Dam Mizan was to divide the water between the Gargar and Shatit rivers. 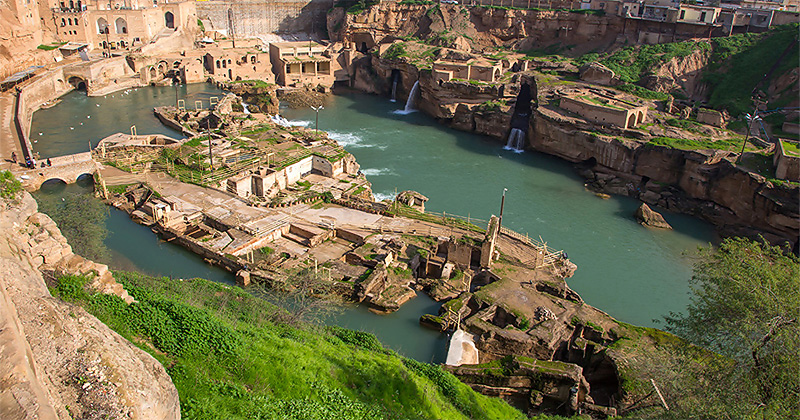 The Gargar River was actually man-made, an artificial water canal created by engineers at the time, making them able to direct Karun’s water into Shushtar Historical Hydraulic System much calculatedly. The length of this river is about 40 km.

Gargar Bridge was built on the Gargar River and its purpose was to create a difference in the water level by blocking its flow. The level difference caused water to enter three tunnels. It is through these tunnels that water is poured into the mills with the essential force to moves them.

The mills had two parts. The topper part was for the mill itself and the lower section was for the blades. According to the excavations, the number of these mills reached up to 40 when this system was functioning, but unfortunately only half of them have remained to the present day.

During the Sassanid era, another dam called Ayar Tower Dam was built with the aim of supplying water to the surrounding gardens of the Gargar River. This dam consisted of two parts, each of which reached a length of 150 meters. Some parts of this construction have been damaged and destroyed over time. There are other dams for various purposes such as fishing, irrigation of vineyards, and finally to connect Gargar and Shatit rivers so that the land on the southern sections of Shushtar could be inhabitable.

At the end of Mizan Dam, there are ruins of a tower, which is octagonal in shape and brick-made. Perhaps it was there to overlook the dam and was used to monitor the workers.

Words and empty words, one after another, creating lines, paragraphs and pages, describing a complex which only can be understood by observation. By being in the place and maybe having a hydrology engineer by your side could help you to comprehend what a massive structure was built in a time where there was no mechanic machinery to aid them.

Irrigation was always a problematic issue in Iran. Facing many draughts, even though there were plenty of rivers flowing nearly everywhere, made Persians the master of this subject which is perfectly reflected in this particular site. No wonder why UNESCO chose this Hydraulic System and all its constructions as a symbol of human endeavor not only to overcome nature but also to use it properly, not to harm it and at the same time benefit from it.

It is amazing what a pristine man-made river with materials such as stone and human constructions creates. Yes, Khuzestan is a symbol of all the honors, which still shines inside the heart of Iran’s borders with complete humility and without expectation of reward or praise. Do not leave what is spectacular in the hands of misleading fantasies. Get up and see with your own eyes and let’s judge whether our children, the next generations to be, will be under the influence or give us pity for the little we have done?