Hakim Abul-Qasem Ferdowsi Tusi was a highly revered Persian poet. He was the author of the Shahnameh, the national epic of the Persian-speaking world as well as the entire Iranian realm. Ferdowsi was born in a village near Tus, now part of Khorasan Razavi province. His masterpiece, the Shahnameh, is the most popular and influential national epics belonging to the Iranian people. Thus the greatest achievement of Ferdowsi is to have all of the named fragments of the former Persian empire, once again recite together “if there is no Iran, may my body be vanquished, and in this land and nation no one remains alive, if every one of us dies one by one, it is better than giving our country to the enemy.” The Shahnameh, or the “Book of Kings,” consists of the translation of an older Middle Persian work. it has remained exceptionally popular among Iranian for over a thousand years. it tells the history of old Persia before the Arab conquest of the region. This tale, all written in poetic form starts 7,000 years ago, narrating the story of Persian kings, Persian knights, Persian system of laws, Persian religion, Persian victories, and Persian tragedies. it took the poet some thirty years to finish the Shahnameh, as reflected in this verse: “For thirty years, I suffered much pain and strife with Persian i gave the Ajam verve and life.” Meaning that he preserved the Persian language for the Ajam (non-Arabs). Ferdowsi was buried at the yard of his own home, where his mausoleum now lies. 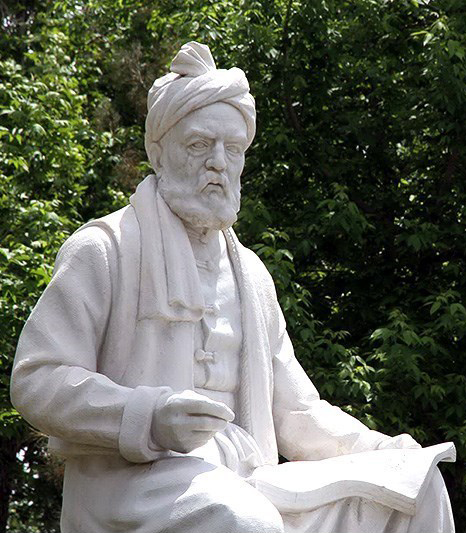 Abdullāh Ja’far ibn Mohammad rūdaki (859-941 Ce), also spelled as Rudagi or Rudhagi, was a Persian poet, and the first great literary genius of modern Persian language, who composed poems in the New Persian. Rudaki is considered a founder of Persian classical literature. He was born in 858 in Rudak (Panjrud), a village in Khorasan, Persia, which is now located in Panjakent, Tajikistan. Most of his biographers assert that he was blind, but the accurate knowledge of colors shown in his poems makes this very doubtful. He was the court poet to the samanid ruler Nasr ii (914-943) in Bukhara. 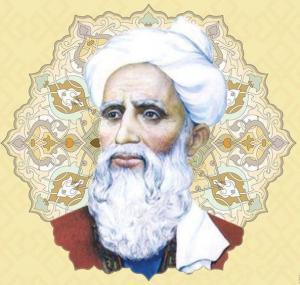 Ghiyas od-Din Abul-Fatah Omar ibn Ibrahim Khayyam Nishaburi, (1048-1131 CE), was a Persian poet, mathematician, philosopher, and astronomer. he was born in Nishabour, now part of Khorasan Razavi province in Iran. his substantial mathematical contributions include his Treatise on Demonstration of Problems of Algebra, which gives a geometric method for solving cubic equations by intersecting a hyperbola with a circle. he also contributed to reform in the Persian calendar. Khayyam derived the binominal theorem before it was formulated by Isaac Newton in the 17th century. he is best known for his poetry, and outside Iran, for the quatrains in Rubaiyat of Omar Khayyam, popularized through Edward Fitzgerald’s free translation:
“The Moving Finger writes; and, having writ, Moves on: nor all thy Piety nor wit shall lure it back to cancel half a Line, Nor all thy Tears wash out a word of it.” 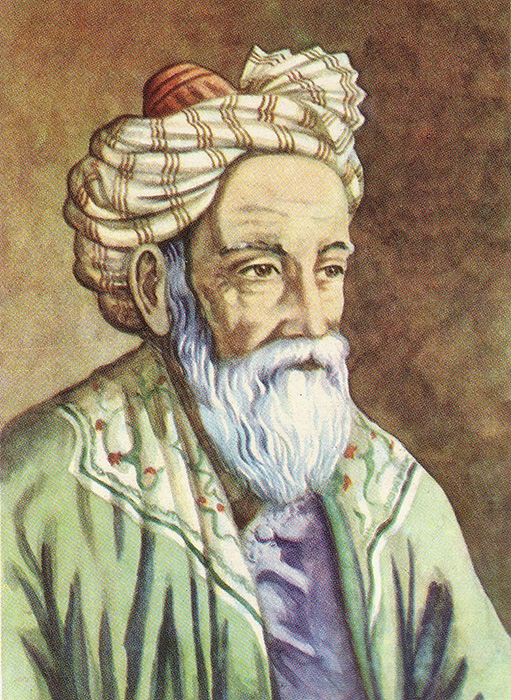 Abū hamīd bin Abū Bakr Ibrāhīm (born 1145-46 in Nishapur – died c. 1221), much better known by his pen-names Farīd ud-Dīn and ‘Attār, was a Persian and Muslim poet, Sufi, theoretician of mysticism, and hagiographer. Information about Attar’s life is rare. he is mentioned by only two of his contemporaries, `Awfi and Khadja Nasir ud-Din Tusi. however, all sources confirm that he was from Nīshābūr, a
major city of medieval Khorāsān (now located in the northeast of Iran), and according to `Awfi, he was a poet of the Seljuk period. It seems that he was not well-known as a poet in his lifetime, except at his hometown, and his greatness as a mystic, poet, and master of narrative was not discovered until the 15th century. jalāl ad-Dīn Rūmī praises Attar’s as an accomplished mystic and describes himself as one of his followers.
The thought-world depicted in Attār’s works reflects the whole evolution of the Sufi movement. The starting point is the idea that the body-bound soul’s awaited release and return to its source in the other world can be experienced during the present life in mystic union attainable through inward purification. By explaining his thoughts, the material uses is not only from specifically Sufi but also from older ascetic legacies. Although his heroes are for the most part Sufis and ascetics, he also introduces stories from historical chronicles, collections of anecdotes, and all types of high esteemed literature. his talent for perception of deeper meanings behind outward appearances enables him to turn details of everyday life into illustrations of his thoughts. As sources on the hagiology and phenomenology of Sufism, Attar’s works have immense value. 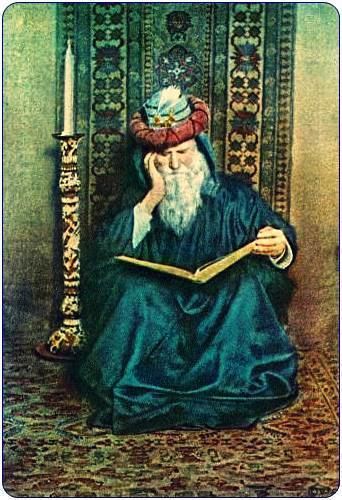 Sheikh Muslih ud-din sa’adi shīrāzī (11841283/91 CE) was one of the major Persian poets of the medieval period. He is recognized not only for the quality of his writing but also for the depth of his social thought. A native of Shiraz, Sheikh Sa’adi left his native town at a young age for Baghdad to study Arabic literature and Islamic sciences at Nizamiyya school in Baghdad (1195-1226). The unsettled conditions following the Mongol invasion of Persia led him to wander abroad through Anatolia, Syria, Egypt, and Iraq. He also refers in his work to travels in India and Central Asia The works of Saadi influenced writers such as Voltaire and Alexander Pushkin– who quotes him in his masterpiece Eugene Onegin.
Ralph waldo Emerson was also an avid fan of Saadi’s writings, contributing to some translated editions himself. Emerson, who read Saadi only in translation, compared his writing to the Bible in terms of its wisdom and the beauty of its narrative. The following verses by Saadi are used to grace the entrance to the Hall of Nations of the uN building in New York: “Human beings are members of a whole, In the creation of one essence and soul. If one member is afflicted with pain, Other members uneasy will remain. If you have no sympathy for human pain, The name of human you cannot retain.” He was buried in Shiraz in a garden called Saadiyyeh. 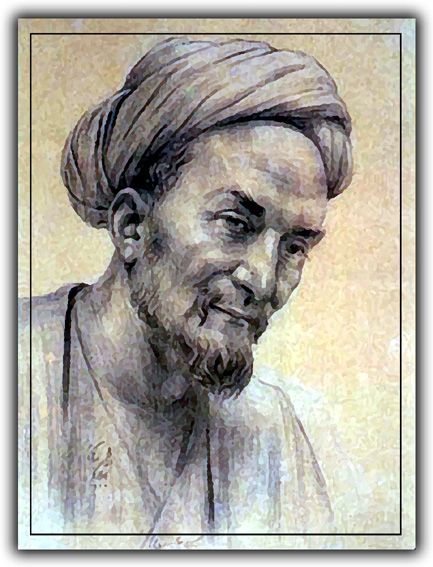 Khwaja shams ud-din Muhammad Hafez-e Shirazi (Birth 1310/1337 CE), or simply Hafez, was a Persian mystic and poet. He was born sometime between the years 1310 and 1337 in shiraz. John Payne, who has translated the diwan of Hafez, regards Hafez as the greatest poet of the world. After centuries, the lyrics of Hafez (the traditional Persian ghazal) can still stir the hearts of his readers, making him an unparalleled figure in the history of Persian literature. very little credible information is known about Hafez’s life, particularly its earlier parts. His collected poems or diwan, however, reveals vast knowledge of disciplines of his time: the Holy Quran, Sufism, philosophy, literature and even musicology. At any rate, his personal life remains shrouded in a veil of mystery. Hafez greatly influenced subsequent Persian poets and has become the most
beloved poet of Persian culture. It is said that if there is one book in a house where Persian is spoken, it will be the Qur’an; if two, the Qur’an and the divan of Hafez. Much later, the work of Hafez would leave a mark on such important western writers as Ralph Waldo Emerson and Goethe. The encounter of Goethe with Hafez’s ghazals became so inspiring to Goethe that he produced his own “west-Ostlicher divan” (Oriental divan) and led the way to the discovery of Persian poetry by the Romantics. Hafez represented Nietzsche as a prime example of dionysian ecstatic wisdom, which he extols so extensively in his philosophy. goethe’s admiration for Hafez and his “Oriental” wisdom, as expressed in the westöstlischer divan, has been the main source of attracting Nietzsche’s interest in this Persian poet. There is even a short poem in Nietzsche’s collected works, entitled An Hafis. 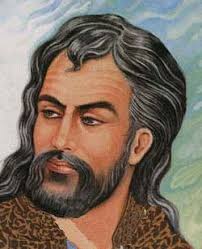 Mawlānā Jalāl ad-dīn Muhammad was one of the greatest Sufi mystics and poets in the Persian language. He is best known for his didactic epic Masnavī-ye Ma’navī (spiritual couplets”) and the collection of his lyric poems, divān-e shams. He was born in Balkh which is in Afghanistan today. Rumi’s life is described in shams ud-din Ahmad Aflāki’s “Manāqib ul-ārifīn” (written between 1318 and 1353). His father was Bahā ud-dīn Wālad, a theologian, jurist and a mystic from Balkh, who was also known during his lifetime as “sultan of the scholars”. His mother was Mu’mina Khātūn. when the Mongols invaded Central Asia between 1215 and 1220, his father with his whole family and a group of disciples set out westwards. On the road to Anatolia, Rumi encountered one of the most famous mystic Persian poets, Attar, in the Iranian city of Nishapur, located in the province of Khorāsān Razavi today. Attār immediately recognized Muhammad’s spiritual eminence. He saw the father walking ahead of the son and said, “Here comes a sea followed by an ocean.” He gave the boy his Asrārnāma, a book about the entanglement of the soul in the material world. This meeting had a deep impact on the eighteen-year-old Mawlānā’s thoughts and later on became the inspiration for his works. 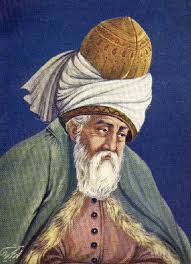 Virgin Atlantic says it is being ‘forced’ to fly nearly empty p...