Kish Island and Mashahd are two of the attractive locales for investors in hotel industry. Without a doubt the famous Hotel Dariush in Kish Island is one of the pride and joys of Iran.

According to Trip Advisor Traveler’s Choice Award in 2019, we’ve rounded up the eight of the best hotels in Iran,

The ranking is based on opinions and the reviews collected from the website’s contributors over the last year.

This Hotel (Zandiyeh Hotel) located in Shiraz as the best hotel in Iran in 2019. Zandiyeh Hotel is one of the most unique and luxurious residences in Iran. Opened in 2013, the hotel offers a wide range of facilities, including traditional Persian baths.

Dariush Grand Hotel located in Kish Island and is one of the most outstanding Iranian hotels. Its architecture reflects elements from the ancient Iranian civilization.

This hotel which located in Iran and standing proudly in the north of Tehran. Espinas Palace Hotel that is real luxury hotel has hidden gem and a peaceful heaven.

This four-star hotel was renovated in 2015, in accordance with international standards. Niloo Hotel is a well-appointed residence located in one of the most decent neighborhoods of Tehran.

Eskan Hotel Located in Argentina Square in Central Tehran, the four-star Hotel provides the easiest access to almost all historical place and areas of the city

This Hotel constructed on a hill, allowing guests to enjoy spectacular views of the Tehran. 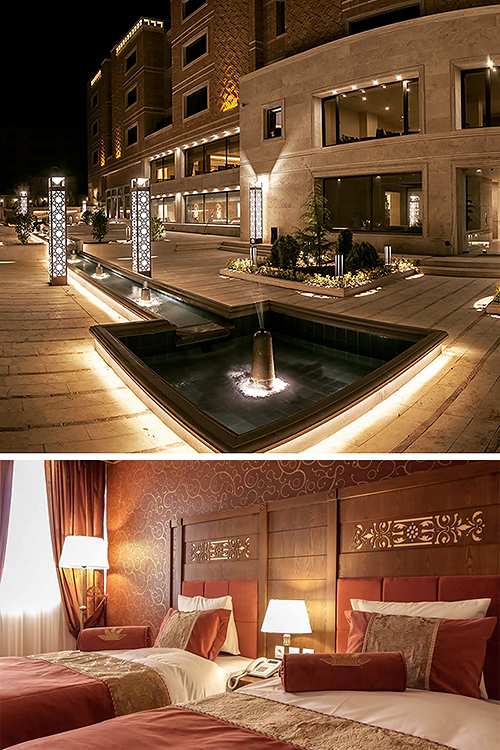 This Hotel Located close to the Holy Shrine of Imam Reza, the hotel is a favorite among tourists and pilgrims alike. This luxury five-star hotel located in the holy city of Mashhad and it is one of the most luxurious places to stay in the city.

Espinas Persian Gulf Hotel is one of the fully integrated resorts in the heart of commercial and historic part of Tehran.

This Hotel located in Yazd. Moshir al-Mamalek Garden is one of Iran’s famous Persian gardens built during the Qajar era, covering 1,300 square meters.