UNESCO World Heritage sites may be a strong motive when someone is planning their trip. Though Fars Province in Iran seems to hold a reputation and is the first destination travelers would choose, Kerman Province is also starting to climb the ladder of tourism attractions. Kerman is an ancient land, a land that has stark potentials to reopen negotiations to claim the world’s oldest civilization.

This article is dedicated to early human shelter, a place they chose to live and therefore, gave it everything they had and called it home, something magnificent in the heart of hard mountains and cliffs.

Troglodytic architecture is one of the earliest styles in architecture; human beings using the first material they could find and adjusting their surrounding environment to their living situations. The difference between a troglodytic village and a cave is so obvious. The latter is natural while a troglodytic cave is made by a human’s hand and it has rooms, balconies, and stairways. There are a few ancient and very famous troglodytic villages in the world like Cappadocia in Turkey, but Kandovan in Eastern Azerbaijan of Iran and Meymand of Kerman is still residential.

Meymand could be like the cave of wonders in Aladdin. With one look it’s a mountain full of squared shaped windows, and there is nothing but rock. However, it is the diamond in the rough.

Meymand is a very ancient village, located near Shahr-e Babak, a city in Kerman Province. Shahr-e Babak is an almost mountainous region with a semi-temperate climate. The plains of Shahr-e Babak used to be covered with many wild pistachio trees, which nowadays, due to global warming and water shortage, are limited to its surroundings.

But what brings one’s attention to this city, is Meymand. One way or another, we were all once living in caves, our ancestors first homes were in mountains, and by collective unconscious memory, we could still go back in time and see ourselves there, feel the feeling, connect, and comprehend. It is a perfect tourism attraction for those who seek some way to go around this normal modern life.

Meymand troglodytic village may date back to 12,000 BC. There is a dispute between archeologists that whether Meymand was constructed during the Aryan tribes or by the hand of Iranian Plateau residences. Although there are twelve-thousand-year-old motifs and six-thousand-year-old potteries to be found, what is certain is that during the Parthian (247 B.C – 224 A.D.) and Sassanid (224-637 A.D.) Empires, this village was one of the most prosperous regions. Even now, with all the modern technologies and machines it takes quite an effort to construct a building let alone using just one’s hand. No other material has been used. 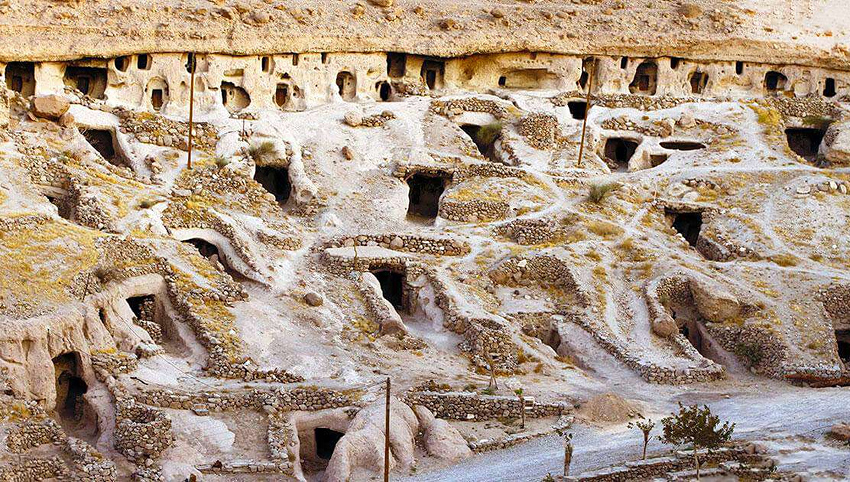 Meymand’s special distinctive feature is its style in architecture which was later called Troglodytic. Meaning that it was constructed by removing huge pieces of rocks, curving them, and evening the surface. They made an environment for their living which included a couple of rooms, a stable, and according to the needs of the family, closets, and other essentials.

Once upon a time in ancient Iran, the mountain had a special sanctity to it. Some locals still respect the mountain, especially if it has a spring, aqueduct, or catchment. A sanctuary in the core of the mountain, Meymand is probably related to the period of Mithraism in Iran, when their natural temples were in mountains.

The followers of Mithra believed that the sun (as a symbol of Mithra himself) is watching over all their bonds. Somehow this led to having faith in the holiness of the mountains and therefore the stone cutters and architects of Meymand set their beliefs out in the construction of their dwellings.

A small group of people started living there. They grew into a population and formed a landscape that lasted for centuries. As Mithraism faded under the shadow of Zoroastrianism in Iran, it became the official religion of the Roman Empire before Christianity took over. Of course, this subject confirms the theory which the Aryan ethnic groups were the first people to build Meymand. This mountain is not the only holy mountain that Mithraic believers chose to establish their beliefs upon. The mountain which now embraces the great Persepolis (Mihr/ Mithra) was also known for its Mithraic temples.

What could survive the harshness of nature and the history of men more than rocks and stones? Alongside religious reasons, the very existence of a stronghold constructed about the village had also a direct impact on its protection. Other than Iran, countries such as Greece are trying to preserve Meymand due to its registration on the UNESCO World Heritage List.

Meymand is one of the few stone villages where life is still going on in it and therefore, it gives a more realistic experience once one steps into it. The interaction of man and nature in Meymand is quite tangible and unforgettable. This historical site has facilities for tourists and guests to visit and stay if they liked to. Maybe one is looking to escape the urban fuss and march back to a much simpler time.

People who have already visited Meymand have mentioned that even if it’s not the first time someone is visiting a cave village with a troglodytic architecture, Meymand won’t fail to impress you. Just walking around, interacting and meeting locals, being invited to join them at their table and taste their food, or even assisting their prayers is a firsthand experience. Life there has stopped many years ago and slept in one of those cave houses is a must-to-do experiment.

Over time, the settlement population of Meymand decreased and most of its houses were occupied by nomads who grazed their livestock in the surrounding plains.

Nowadays, the living conditions in Meymand are harsh due to the hot temperature in summers and very cold winters. Spring is the best time to visit the historical village of Meymand in Shahr-e Babak. The trees of this region add to the beautiful features of this while the village itself has a pristine view.