Yazd is the capital of Yazd province, located 270km southeast of Isfahan. The name is taken from Yazdgerd I, the Sassanid ruler. The city has been a Zoroastrian center during Sassanid period. At present is very well known for attractions, which are well preserved because of desert surroundings. The city of windcatchers, fire temples, cisterns, and UNESCO world heritage sites.

Masjed-e Jame, also known as the Friday mosque with an impressive gateway, crowned by a pair of minarets, the highest in Iran. The portal’s façade is decorated from top to bottom in dazzling tilework blue in color, it is a masterpiece in Islamic architecture.

The shrine belongs to 11th century, has a fine Seljuk inscription inside, with the names of each of the Shiite Imams. There are some interesting plaster moldings on the mihrab, and the brick dome is a good example of its kind.

This mosque belongs to 15th century with a superb portal ornamented with stucco, and the traditional four-Ivan structure on a courtyard. The frieze on the portal has artistically designed by valuable calligraphy on it. The mosque is very close to the Tekiyeh Mir Chakhmaq a 19th century tiled edifice.

It is the most important Zoroastrian fire temple, situated in a garden. The scared flame has been burning since about 470 A.D.

The Alexander’s prison or the school of Ziaei is in fact a school, which was built in 1233 A.D one of the outstanding features of this building is its beautiful dome, which shows the Mongol architecture in Iran.

Dakhme or Qaleh Khamushan, are two impressive buildings on hills, where the bodies of the dead Zoroastrians were exposed, as long as any fresh remained on them. Three towers of silence are on top of three hills less than a kilometer out of the city.

This important Zoroastrian fire-temple is on a hill 52km to the north-northeast of Yazd. Thousands of pilgrims go there due to an annual ceremony which lasts for ten days.

The garden was built in 1747 A.D by the order of Mohammad Taqi Khan Bafghi. The ruler of Yazd, which has been his residence. The garden consists of beautiful building, the most prominent part is a windcather, which is 33,80 m. high, the tallest one in the world. 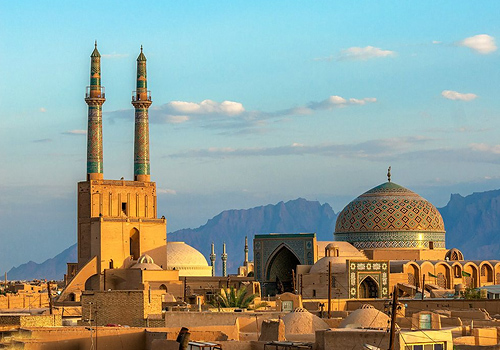