Tehran’s glory is deeply attached to the Golestan Palace. Though it seems it has grown out the Palace’s shadow, who could forget that Tehran’s first heartbeat was because of this World Heritage Site.

Now Tehran, located in northern Iran is one of the most ideal places to live. Numerous water sources, good and suitable climate, and of course being the Iron Throne of Iran has also made it well-known.

The modern Tehran is a gray city, however, it has a grandeur that will keep you mesmerized. Tehran is the largest metropolis in Iran. A city that is full of smoke and crowds with people who are constantly running and doing their jobs quickly. The thought of spending several days or even months alone in Tehran can be terrifying, but it is at those specific hours when Tehran opens its lips and talks to you, and this is the key to know the city. Where one could find immeasurable beauty, an open, immune, infinite, and warm embrace, under the guise of a wild monster.

Archaeologists have indeed found human skeletal remains dating back as far as 7000 years about Tehran, but the official history of Tehran began with its selection as the Capital. 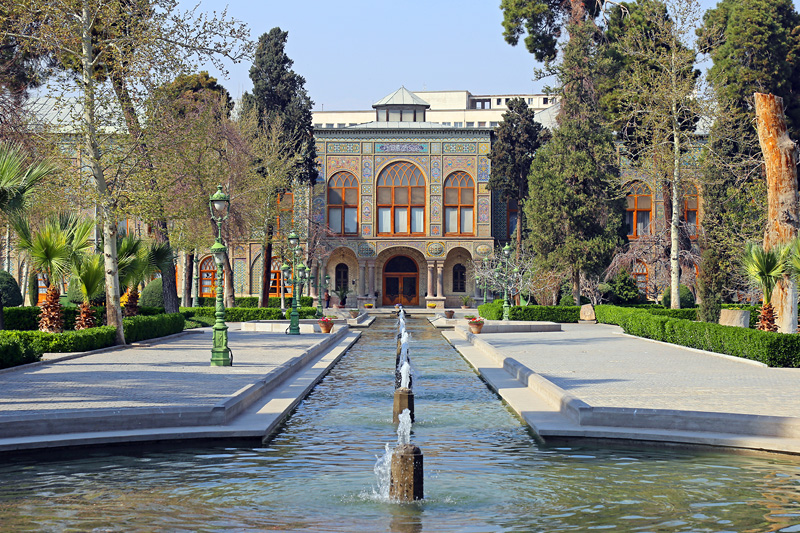 The original core of Golestan Palace, minus the Karim Khani Nook, was built by Agha Mohammad Khan Qajar, and the crown he left behind is still in the museum of this palace. Later, his successors, Fath-Ali Shah and Mohammad Shah made many changes in the place, but it was Nasser al-Din Shah who, considering his foreign travels, wanted to build a city like Paris and started his idea with the Golestan Palace.

Therefore, one of the wonders of Tehran is the Golestan Palace complex. Especially since the city of Tehran started to develop from there and now this palace and its belongings are housed inside the city.

Golestan Palace dates back to the Safavid dynasty, but nothing is known about their construction and buildings except for a general plan. The whole, except for one or two cases, is entirely and exclusively made during the Qajar reign. The main bazaar of Tehran, Sepah Salar Mosque, and the main recreation areas were built around the palace. 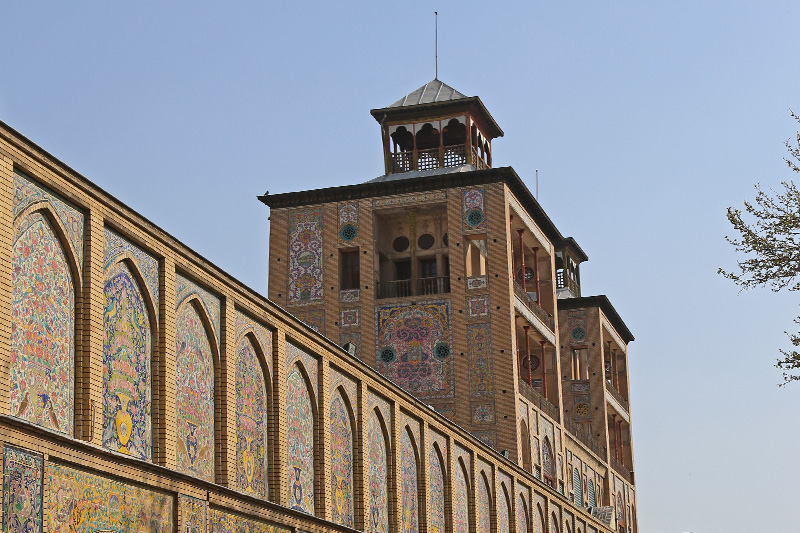 The Golestan Palace complex takes its name from the main hall of this palace, which was constructed in the time of Agha Mohammad Khan Qajar. The main royal citadel existed before him, when Karim Khan, his blood enemy, was the Shah of Iran. We could see why conquering this place was crucial for him. After many fierce clashes with the survivors of the Zand dynasty, he won the war with brutality and was crowned there later in 1174 AH.

His successor Fath-Ali Shah and other kings of the Qajar dynasty plus the only two kings of the Pahlavi house were crowned in the hall of Golestan Palace too. These events have wordless speeches. All these men with hearts full of hope, plans, ambition, and supremacy, gathered in such a place to wear the crown of the ancient Persian Empire, but in the end -except in a few cases- failed. The Qajar kings are mostly responsible for such extreme failures. That is why the Golestan Palace complex has a unique identity.

It puts man in front of himself, without a shield nor a mask.

The only major changes to the palace complex were in the times of Agha Mohammad Khan, Fath-Ali Shah, and Nasser al-Din Shah. Nasser al-Din Shah added palaces to the collection and changed its overall design. Due to his three famous trips to Europe, the European style in any aspect of art made a huge impact on him.

As the Qajars hated the Zand dynasty before them, the Pahlavis also had issues with their predecessors. Though they felt they should make a scene by having the coronation there, they ruined the view by building a telecommunication tower near the Tupkhaneh Square, turning the palace complex into an asymmetrical environment.

There is more than one palace or a hallway in this UNESCO World Heritage site, which is why it’s called a complex:

The origin of Golestan Palace is this hall. Where the most important coronations of contemporary history have taken place. The largest roofed building of Golestan Palace is this hall, and after moving the Sun Throne to this place, it was used for official ceremonies and this added to its importance. The original structure belongs to the Qajar dynasty and the time of Agha Mohammad Khan, but the second Pahlavi Shah -and the last king of Iran- slightly changed and decorated it for his coronation.

Today, The Cultural Heritage Department has added objects to this hall and turned it into a museum. Exquisite items such as paintings by Kamal al-Mulk, Shah Ismail Safavi’s armor, Nader Shah’s bow, and arrow, and the crown of Agha Mohammad Khan are all in this museum. The Sun Throne and the crown known as “Taj-e-Kiani” were formerly in the Salam Hall but were later moved to the National Jewelry Museum.

Agha Mohammad Khan Qajar fought so hard to occupy this part of the Golestan Palace complex. Afterward, he wended whatever he could put his hands on from Karim Khan Citadel in Shiraz including Karim Khan’s body. Yes! The man tuned in his grave. Agha Mohammad Khan Qajar did what Alexander had done to Persepolis. Publicly announcing that a dynasty has fallen and a new one is on the rise. Of course, his incompetent successor Fath-Ali Shah added a few changes to it and covered the Porch with paintings and poems in praise of himself.

The Marble Throne or Soleimani Throne is one of the prominent manifestations of this Porch. The last King to sit on it was not from the Qajar dynasty. After taking the right of monarchy from the Constituent Assembly, Reza Shah Pahlavi was crowned to be King on the Marble Throne. 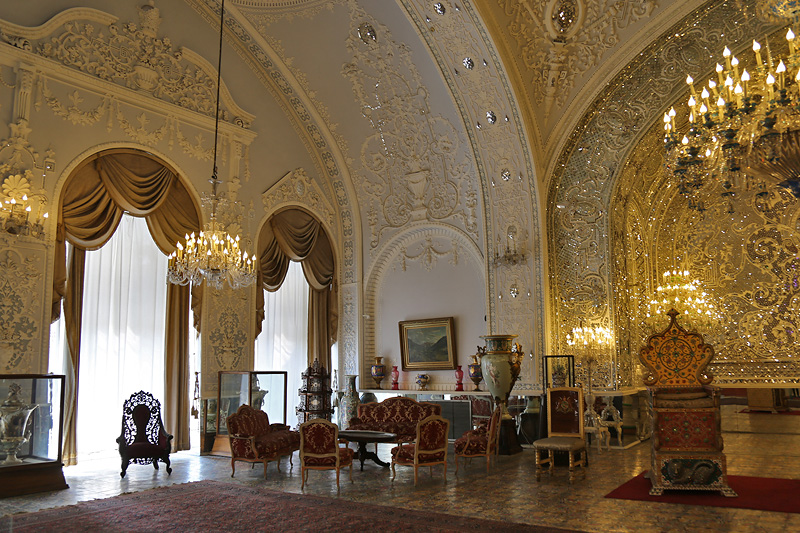 If we study the architectural history of Shams- Ol- Emareh carefully and compare it with other important European buildings at that time, we will find that this edifice was very advanced and with all its traditional colorful Iranian tiles, it was new construction.

Shams -Ol -Emareh was the first 5-story edifice in Tehran. It was completed in 1246 AH, and because of its height, it made quite an impression on everyone especially the foreign guests.

When Nasser al-Din Shah returned from “Farang” (Europa), as he said, he wanted to have a high edifice so that he could watch the city from above and enjoy the view. The combination of western and Iranian architecture, tradition, and modernity, could be seen in this building.

Shams- Ol- Emareh is built on one side of Golestan Palace and has a door to the current Naser Khosrow Street, through which the Qajar Cabinet entered the palace. Today, the door is closed and the building is covered with curtains r more protection. There is no access to the royal residence and the side rooms from inside the palace. 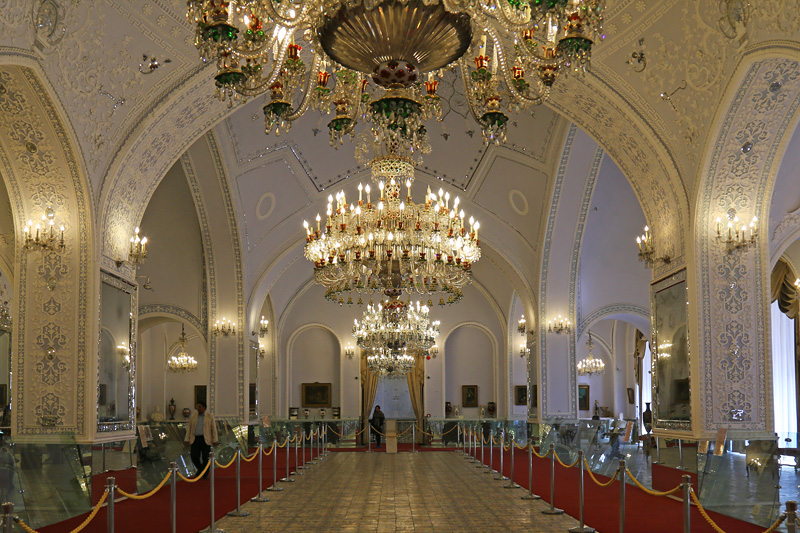 The White Palace, the Pond House, the Karim Khani Nook, and the Building of Wind catchers are among the other palaces in the Golestan Palace complex of Tehran. Each has its characteristics but not as glamorous as the main palaces.

Today, for example, the White Palace has become an anthropological museum, and series of artworks by contemporary or ancient artists, as well as documents and photographs related to the Qajar kings, have been displayed for the public. The Building of Wind catchers, which Nasser al-Din Shah Qajar had a direct role in monitoring and designing it, happens to have a very beautiful, fragile sash window, and for this reason, is not always open to visitors. It seems that The Building of Windcatchers was a place where the cabinet met.

The Karim Khani Nook is a place built exclusively by Karim Khan of the Zand dynasty, but during the age of Naser Al-Din, due to the main hall’s construction, he invaded and occupied it and almost destroyed it. The most important items in this part of the palace are the Marble Throne of Fath-Ali and the tombstone of Naser al-Din Shah. His tombstone was brought to this place from his burial grave in Rey and has a complete engraving of him who was shot to death on his 50th anniversary of reign.

All around the courtyard of Golestan Palace are paintings and tiles that are beautiful in terms of color, but unfortunately, there is no mention of the elegant design of the previous eras. However, it gives the whole complex a spirit that the brick walls alone could not have done.

The point you should know about the Golestan Palace complex is that the tickets of each palace are sold separately, aside from the entrance ticket. First of all, determine the palaces you are going to visit and then get a ticket.