Bam and its Cultural Landscape

With a first look, one may realize that among other provinces of Iran, Kerman could not be considered a land with comprehensive attractions. But reality and facts have never stopped at just one glance. Therefore, we dig deeper and go a little further.

Kerman is one of the most amazing provinces of Iran when it comes to the environment, geography, and historical elements. The Province of Kerman has one of the richest lands that counts as the main resource for Iran’s industries.

History usually comes with the most tragic events and Kerman which embraces Bam, is also full of terrors. Like when Agha Mohammad Khan Qajar heartlessly took out many eyeballs in Bam and Kerman just to prove that defending a Hero and being on the right side, has its consequences. Before that, Kerman, including Bam, suffered from major attacks and were burned to the ground and then revived, like a golden-red Phoenix.

This province holds both the hottest (also in the world) and the coldest spots of Iran and apart from its strange and wonderful deserts, it has villages with pristine nature and beautiful rivers that have added to the sights of the region.

This World Heritage Site is about one of the greatest phenomena that the Kerman province generates. World’s largest adobe building is located in Bam, Kerman. 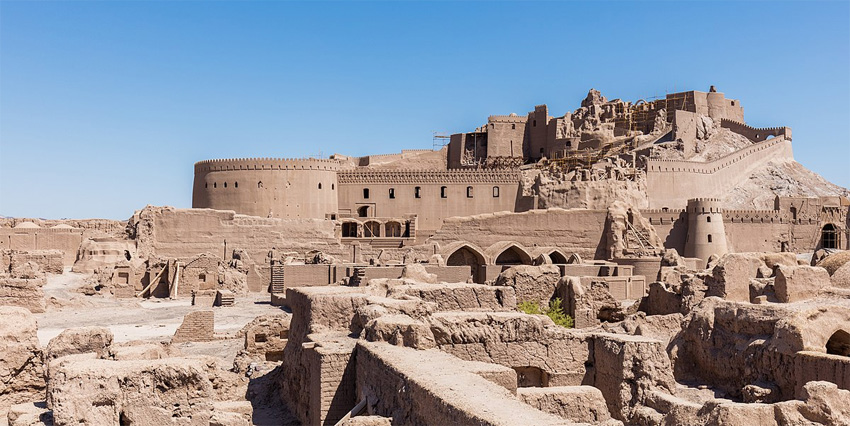 The city of Bam is placed in the southeast of the Kerman province, by the ancient Silk Road, and did represent (and still does), a clear road to Sistan, one of the great harbors in trading. It is 195 km away from Kerman and UNESCO’s World Heritage site, Arg-e Bam is the main landscape of Bam. A historical city that was once ranked as one of the most desirable places to visit in Iran.

The exact date of Bam’s construction is not known. Many attribute its historical city and citadel to the Parthian and Sassanid dynasties, although the Achaemenes Empire is considered to have built the base structure. What we can deduct from some solid documents is that Bam was very popular and prosperous. As well as some politically important issues, Bam’s economy was very special and unique. The textile industry, especially the tailoring added to the attractive factors in Bam.

It can be said that Bam has gone through one of the worst natural disasters in the recent decade. Many were devastated by the shocking earthquake and many were killed. Not to mention the ones who stood while anything they held dear was lost right in front of their eyes. The great historical city of Bam collapsed. The world’s largest adobe structure became nothing but earth.

Before the 2003 earthquake, Bam was the last place where Lotf Ali Khan (Zand dynasty 1751-1794) took refuge there and for a while, it was considered the capital of Iran, but upon Agha Mohammad Khan Qajar’s victory over the Zand army the city fell into his hands and many men, women, and children of Bam were executed.

The Citadel of Bam was the largest adobe building in the world before the earthquake in 2003. This earthen city was erected near the fifth century B.C. and glowed till the middle ages of the 19th century A.D. It had a reputation for itself and generation after generation kept their lineage. One of the reasons why the Citadel was so famous and had high ranked people, merchants, and others come and go was because of the Silk Road nearby. As a result, many caravans traveled to the city, increasing its prestige as well as its name.

This Citadel is a complete adobe structure and for this reason, it has been severely damaged over the years. However, the general plan of the city was quite clear before the earthquake. The citadel comprised of four key sectors: the residential district, the stables, the barracks for the army, and the governor’s residence (the main building).

Arg-e-Bam used to have nearly 38 lookout towers, 4 entrance gates, and the outer defense wall was bounded by a moat. The Government Quarters was on a hill, protected by a double fortification wall, overlooking the city. The most extraordinary sections were the Mosque, the bazaar, the Mirza Na’im ensemble, and the Mir House.

High walls surrounded the city and prevented invaders and wild animals from entering. The entrances to the city were tightly controlled. Then there were the houses of farmers and people who were considered poor that generally did not have more than two or three rooms. People of the middle class had houses with three to four bedrooms. Noble houses and the houses of the aristocrats come after and had more rooms, porches, and facilities such as a school and a sports field. After all this, in the center of the city, where it was well protected and had a clear view of the whole city, was the government citadel.

Bam Citadel is included in the UNESCO World Heritage List, which is why after the earthquake, many countries rushed to its aid and paid for the repair. The serious damage caused by the earthquake has been partially restored and the Citadel is almost in its former shape. However, those who saw Bam and the Citadel before the earthquake were very lucky. What we need now to understand the greatness of Bam alongside the effort to restore it, is an illustration and a little imagination.