One of the most glorious and magnificent ancient sites of the Achaemenid Empire is Naqsh-e Rostam, which is including the huge tombs of Persian kings dating back to the first BC. The stone tombs of Achaemenid rulers and their relatives dating to the 4th and 5th centuries BC, engraved on the superficies of a mountain range considered sacred in the Elamite periods. It shows the lasting memory of a powerful empire that ruled over a significant portion of the ancient world. The meaning of Naqsh-e Rostam is the Throne of Rostam which is located about 5 km (around 3 miles) to the northwest of the capital of the former Achaemenid Empire, Persepolis. The Sasanians carved generously decorated reliefs in the 3rd century AD. Although Naqsh-e Rostam is a royal necropolis, it is also a major ceremonial center for the Sasanians until the 7th century AD. The evidence of relief and old graves belong to pre-Achaemenid such as Elamite was found in the Naqsh-e Rostam site which shows that this site was already in use before the arrival of the Achaemenids. A portrait of a man with a hat which forward-pointing and a long dress like vesture have been carved over by a Sasanian relief, but this cloth is not typical of the Achaemenids and Sasanians, so according to some sources, this figure shows that it belongs to the mythical hero of the Shahnameh writings in the book of the kings, named Rostam, Therefore the name of the site. 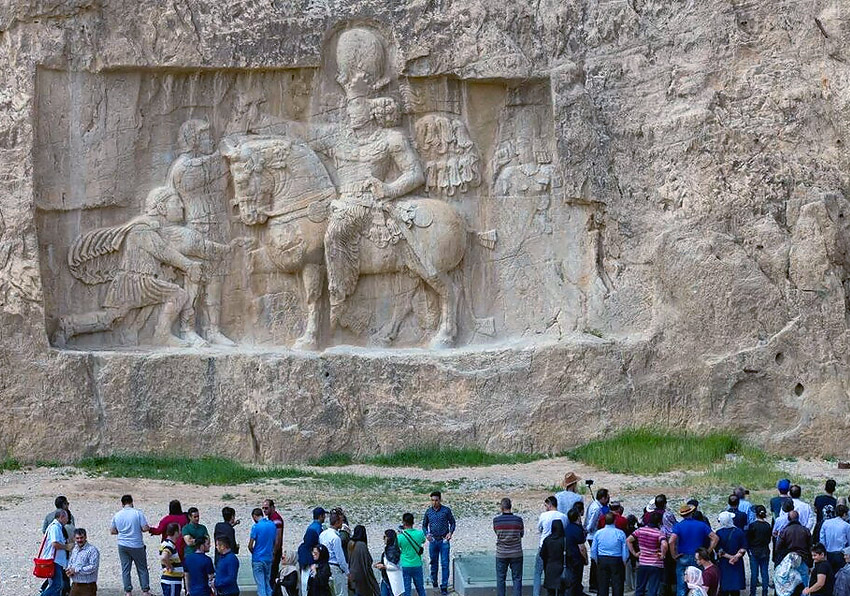 The religion of kings of this dynasty

There is a mountain previously called Mehr( means love) and now called Rahmat (means Mercy)In this mountainous region including a 2500 years old ruined palace still blinding on its domain. This place remains from the Achaemenid reign of Iran from c.550 to 330BC. Researchers have not still conclusively reached a definite opinion on the religion of this dynasty and some result which have to obtain is based on questionable pieces of evidence and commentary. The sermon is an trying to show that the kings of this dynasty were surely followers of Zoroaster according to remaining pattern and stone-carvings, this religion was the first official religion of the world 6 to 7 centuries AD. You can see the proof of this article in all the symbols found in this unique palace having Iranian roots.

Together with other records of Persia are lost forever. Yet enough remains to suggest the sacred nature of this site. Most scholars agree that the square structure in front of the tombs, known locally as the Shrine of Zoroaster (Ka’ba-ye Zartosht) is, in reality, an altar. Several other vestiges on the top of the hill and the general design give weight to the idea. There are four tombs. The identity of one of them, that of Darius the Great, is positively known from the inscriptions carved on the doorway and friezes. This is the second tomb from the right as you face the cliff standing at the foot of the square stone building. The four occupants of the tombs are suggested as (from left to right facing the rock) Artaxerxes I, Xerxes, Darius I (The Great), and Darius II. Hewn from the side of a hill, a sheer cliff face about 500 feet long and 200 feet high, these vaults in their solidity and inaccessibility were the last resting place for the august Achaemenian Kings. The facades of the tombs are uniform in design, some 75 feet high and 60 feet wide with a door in the center. Two columns on each side of the doorway, capped with bullheads, support a frieze and a panel occupying the topmost part of the façade. Carved in two rows in the manner of other Persepolitan art, representatives of vassal nations support the throne of the King, who is in an attitude of worship before the sacred fire, the sun, and the emblem of Ahuramazda floating above all. The interiors of the tombs are now empty though they were undoubtedly richly decorated in their time. One tomb is now easily accessible by a staircase recently constructed for visitors.

The stone of Zoroaster

This solid building probably built by Darius the Great, served some religious purpose, and the space between it and the foot of the necropolis was filled with gardens, avenues, and statues of the Kings. Here again, the Visitor may pause and try to visualıze the ceremonies of ancient days, when the long-robed high priests and their acolytes holding incense burners and chanting sacred hymns, performed the rites and rituals of the faith and sang the praises of the deceased monarchs.

There is a building stands at the necropolis Aside from the tomb. Zoroastrian come along to pray around Naqsh-e Rostam in this magnificent temple named Ka’ba-ye Zartosht. As in the past, a lot of dust and sand cover the area so The real ground is the surface of this temple. it is the same as Zendane Suleyman (means Prison of Solomon) in Pasargadae which is the first dynastic capital of the Achaemenid Empire. At first, it was believed that this structure was the site of a perennially burning fire common in Zoroastrian temples, but the lack of ventilation system shows that Although there is currently no general agreement as to the specific use of this structure, it is truly accepted that it served a religious function. On the walls of this building is a relatively well-preserved epigraph in three languages. 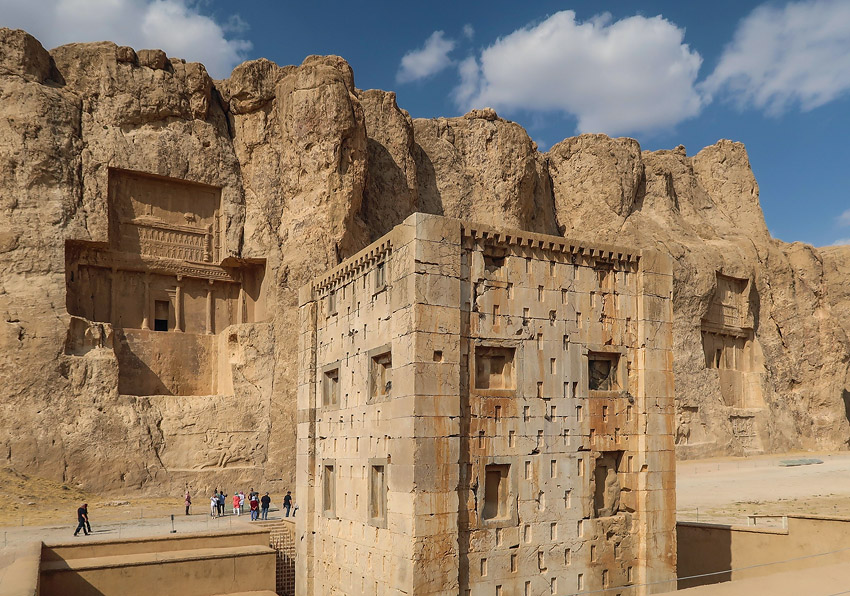 In and near Persepolis numerous carvings which date from the 3rd century A.D. can be seen. Seven panels of Sassanian carving dating from the Second Persian Empire (220-640 A.D.) are seen at the base of the necropolis. The most interesting of these carvings is that of Shapur I accepting the homage of the Roman Emperor Valerian (260 A.D.). The seven panels, again proceeding from left to right are as follows:

The inscription on the large vacant space between the third and fourth tombs dates from the 18th century. 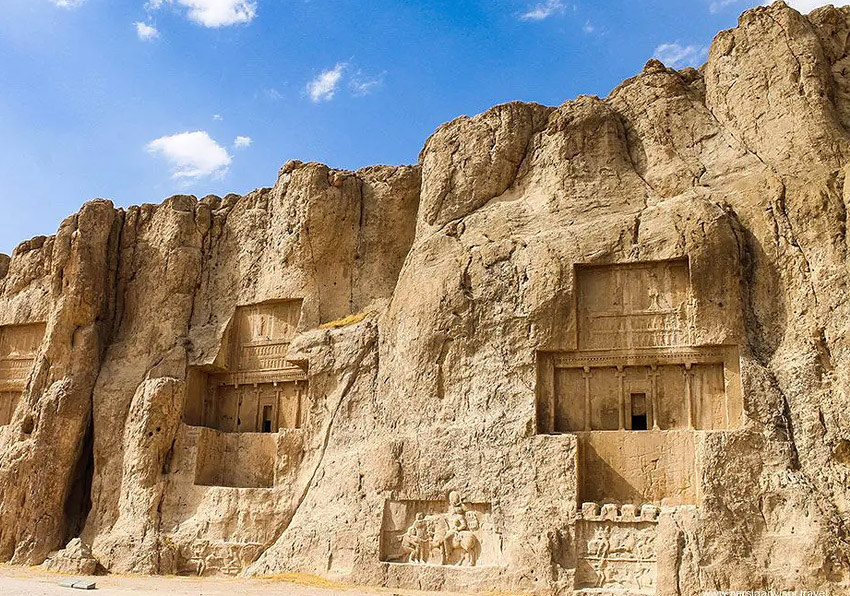 The Mausoleum of Saadi Scroll to top