Do you Know About Minakari as The Art of Painting, Coloring the Surface of Metals? 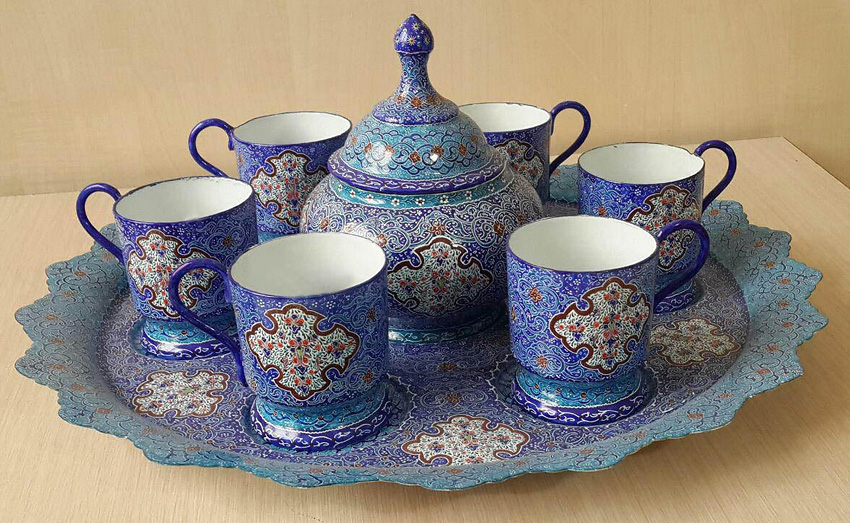 Minakari (Enameling) is the art of painting, coloring, and decorating the surface of metals by merging over them brilliant colors that are decorated in a complex design.

Mina is the feminine form of Minoo in Persian, which means Heaven. Mina refers to the azure color of the sky. The Iranian craftsmen of the Sassanid era invented this art and Mongols spread it to India and other countries.

The French tourist Jean Chardin, who traveled Iran during the Safavid journey, refers to an enamel work of Isfahan, which contains a pattern of birds and animals on a floral background in light blue, green, yellow and red.

Iranian artists have been interested in this art and used it in their metal works since the Achaemenian and the Sassanid dynasties. The enamels being so delicate, we do not have many of them left from the ancient times.

Some documents indicate that throughout the Islamic civilization of and during the Seljuk, Safavid, and Zand dynasties there have been outstanding enameled dishes and materials. Most of the enameled dishes related to the past belong to the Qajar dynasty between the years 1810–1890 AD.

The intricate geometric design pattern of Minakari symbolizes various elements of a belief structure that has been evolved since the dominance of the Mithraism era in the Iranian plateau.

In Minakari an ornament is crafted in silver and then the artist draws the desired design. It is then outlined by the engraver to make the enamel adhere firmly to the metal. Enameler then brushes the ornament on the engraved design with special colors called Mina in red, green, black, yellow, blue, etc. A single piece of Mina passes through many bands before it reaches completion.

Gold has been used traditionally for Minakari jewelry as it holds the enamel better, lasts longer and its luster brings out the colors of the enamels. Silver, a later introduction, is used for artifacts like boxes, bowls, spoons, and art pieces while Copper is used for more economical handicraft products. The art of Minakari is still practiced vigorously in Iran, mostly in Isfahan.

Have you ever seen Heyran as One of the Most Famous Tourist Sites in the Astara...

Croatia, Greece, and Turkey could join the UK quarantine list amid spikes in...
Scroll to top