About 20 km west of Kazerun, a major city in southwestern Iran, on the side of an important road and feed by several permanent watercourses which always has been crucial to nourishing Iranian cities there are scattered remains of Bishapur, one of the oldest Sassanian period cities. At 266 AD Shapur, the second king of the dynasty ordered to construct the city on the margins of a fertile plain which was the center of Shapur Khoreh province. The road that crosses by the city used to connect Persepolis to Susa in the Achaemenid period and Gur-Bishapur cities to Ctesiphon latter in the Sassanid era. Equipped with these privileges Bishapur had the necessities becoming a major regional center but due to some reasons merely remained as a luxurious resident for spring stay of kings and their courts (like Persepolis Achaemenids). Succeeded to acquire brilliant conquests against the Roman Empire, Sassanid used trophies and labors resulted from these triumphs to start the construction of Bishapur. 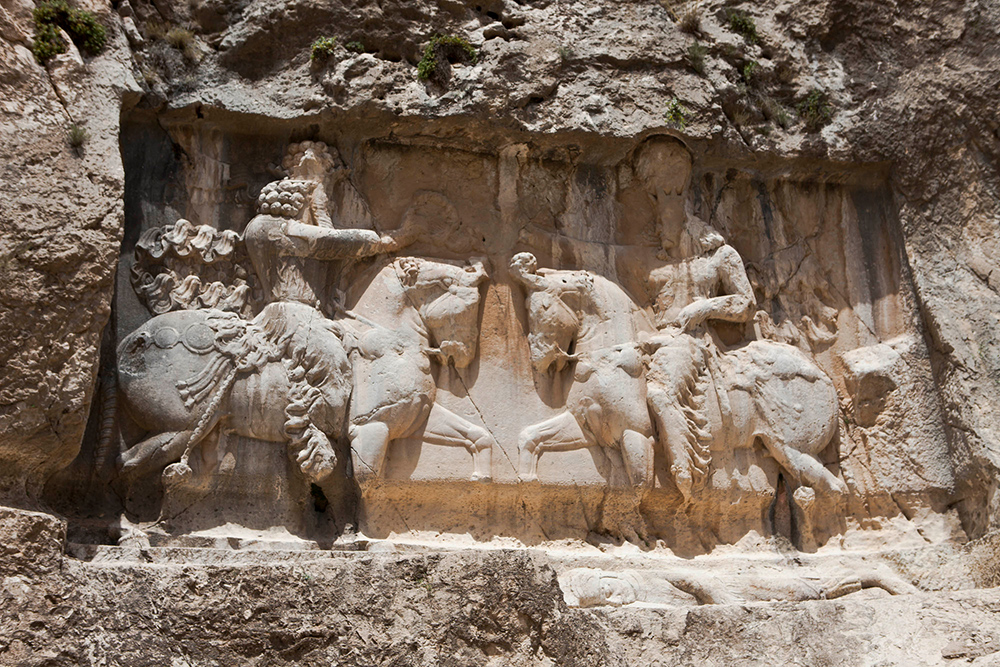 Although circular city plans were in use prior to Bishapur, Syrian origin Epsay the architect who was influenced by Roman urban engineering opted a Hippodamian plan with two main intersecting streets and four gates for the city. The city was surrounded by sturdy fortification walls a deep ditch also running around it. Moreover, Qale Dokhtar castle seating on the northern heights also enhanced the city’s defense capabilities. Main streets which cross each other dividing the city into four equal sectors which enclose noble’s houses among gardens and greeneries. With appropriate geographic location and rich water supplies, Bishapur grew rapidly becoming comparable with Antioch, the most beautiful and urbanized city of that time. Basic building materials at Bishapur were boulders with a mix of mud and gypsum as mortar. Based on the available evidence it seems some public buildings and possibly affluent houses had remarkable tessellation patterns.

The basic architectural arenas of Bishapur are City Wall: parallel with river course and some in places following it a massive fortification wall was surrounding the city. With 9 meters width supported by towers and solid buttresses, the wall was built by boulders and mortar. Qale Dokhtar: This castle on the northern mountains which overlooks the city had many rooms and corridors possibly supposed to shelter people at dangerous occasions. Citadel: Separated from the other parts by a branch of city wall this sector was located in the northern corner of Bishapur. Here was the core of socio-politic power which distinguished from the other sectors by its specific architectural style. Anahita Temple: These two shells cubic structure was built by cut stones and iron clamps. The temple was built 6 meters deeper from the surrounding structures and a branch of the Shapur River was diverted into it. The water was flowing at the floor of a corridor which runs all round of the building. The temple was functioned to commemorate Anahita, leading and guardian goddess of waters who was extremely respected in ancient Iran. Ceremonial Hall: This type of structure which introduced to the Iranian architecture for the first time at Bishapur was a four porches hall covered with a huge 25 meter height dome. Many famous tessellations works from Bishapur has been found in this building. Valerian Palace: 150 east of Ceremonial Hall there are remains of a massive structure known as Valerian Palace. The inner surface of the Walls was covered by fine cut slabs and the outer with gypsum plaster which gave a white glitter to the palace. Obelisks: Raised in honor of the Sassanid king, these two obelisks are standing nearly at the center of the city. These monolithic obelisks have Corinthian capitals with a bilingual inscription mentioning name Epsay, the architecture whose efforts was appreciated by king Shapur. Rock Reliefs at Tang-e Chogan: This gorge which is the headwater of Shapur River is located close to the northern side of the city. 6 reliefs from 3 Sassanid kings with the themes of triumphs over enemies and receiving a ring of power has been carved on the rocky walls of the gorge.

For about four centuries Bishapur was one of the most beautiful and prosperous Sassanid cities until it captured by Arab invaders. Even after being conquered the inhabitants upraised against Arabs three times made them complete suppress it at 646 AD. Then the city lost its magnitude for the next three centuries and the elite places like the ceremonial hall and the palace were inhabited by ordinary people. During this time settlement patterns moved from north to south so many Islamic structures scattered in the southern half of the city. With a new line of rulers, the city flourished again from 9 to 12 centuries until it devastated by a horrific earthquake. However, archaeologists found coins from 13-18 centuries but Bishapur never retrieved its previous glory.