“The worship of Marduk, the king of the gods, he [Nabonidus] [chang]ed into abomination. Daily he used to do evil against his city [Babylon] … He [Marduk] scanned and looked [through] all the countries, searching for a righteous ruler willing to lead [him] [in the annual procession]. [Then] he pronounced the name of Cyrus, king of Anshan, declared him to be[come] the ruler of all the world. From [Babylon] to Aššur and (from) Susa, Agade, Ešnunna, Zamban, Me-Turnu, Der, as far as the region of Gutium, the sacred centers on the other side of the Tigris, whose sanctuaries had been abandoned for a long time, I returned the images of the gods, who had resided there [i.e., in Babylon], to their places and I let them dwell in eternal abodes. I gathered all their inhabitants and returned to them their dwellings.” The Cyrus Cylinder is regarded as the first human right charter in history.

It is a document issued by the emperor Cyrus the Great of Persia inscribed in Babylonian (Akkadian) cuneiform on a clay cylinder. Passages in the text, express Cyrus’ respect for humanity, and as promoting a form of religious tolerance and freedom. There are three main premises in the decrees of the Cyrus Cylinder: the political formulization of racial, linguistic, and religious equality, slaves and all deported peoples were to be allowed to return to home; and all destroyed temples were to be restored. 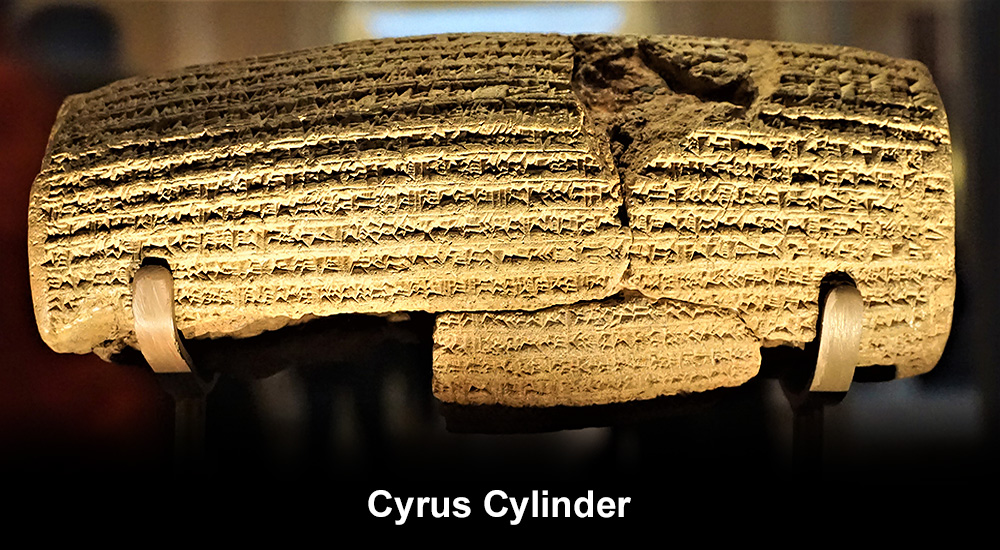 The inscription was translated into all six official U.N. languages in 1971. A replica of the cylinder is kept at the United Nations Headquarters in New York City in the second floor hallway, between the Security Council and the Economic and Social Council chambers.