From ancient times and at the same time as the migration of the Aryan tribes to Iran, Lake Urmia has been surrounded by colourful mythology and legends. The land that was bestowed up on behalf of the Aryan people by Ahura-Mazda was from all sides and aspect the best part of the known world. According to Avesta and middle Persian sources, Iran was the replica of heaven.  By the definition of the holy texts and scripts, we gather that the best of land is the one with fresh air, abundant water resources, and mountains. The land is fertile and agriculture is indeed the first way of making a living. Demons, made-up monsters, spies, and enemy forces are far away from such a place, and peace and harmony and justice are within reach. By the time that Aryan tribes decided to mark their steps on history, some of them moved toward the pampas of Azerbaijan and mainly around Lake Urmia which was located in the northwest of Iran. Mostly, they were Magi. Water and its resources were and are still, great value for Zoroastrians. There-for, Lake Urmia and all the rivers which flow into it became important to all the Aryan rulers. Urmia Lake was always considered an inland lake and had rarely seen a foreign commander. Urmia Lake is filled with mystery and mythical stories that are yet to be known around the world. In most scripts including Shah-Nameh Urmia is called by its middle Persian Name Chi-Chast. 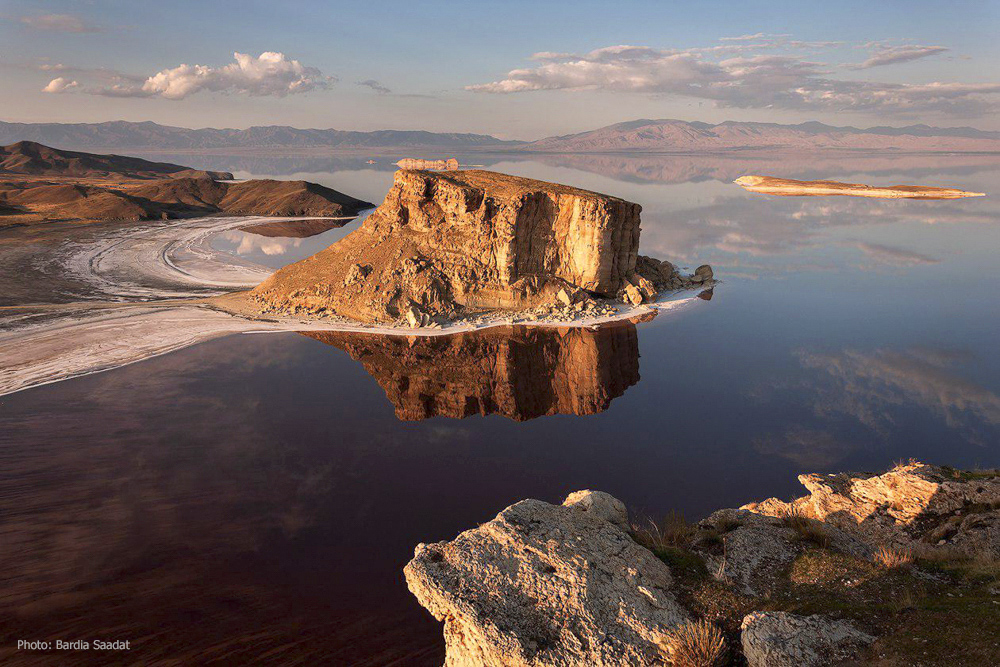 Long before Urmia Lake was named after the city Urmia in western Azerbaijan, according to the geographical information in Avesta, middle Persian texts referred to this lake as Chi-Chast. Avesta describes a lake very deep, blue, and also highly luminous which Ahura-Mazda has created by his divinity. Avesta describes this lake and mentions that Zoroaster, the great prophet of Zoroastrianism, was born alongside this lake. Such a claim puts Lake Urmia or Chi-Chast, on the map. The Magi made a huge deal out of it and build their foundation of Zoroastrianism around it so strongly that we could compare it to the Vatican. The story doesn’t end here. Chi-Chast is very much loved by The Goddess of water and fertility of ancient Iran and Zoroastrianism, Anahita. Honouring this lake, and respecting it, praying to it and praising it would’ve brought any believer nearly anything. This is probably why the most famous king in mythical stories and heroic ages of Iran, Kay-Khosrow, prayed by this lake so that he may come out as the victor of the wars ahead of him. He also made the goddess proud by destroying a temple in which demons ruled over near the lake. To further delve into the history of Urmia’s lake and its role and importance in Iran we must mention one of the great distortions made by the Sassanid dynasty in their own time. Parthians, the former dynasty, were mainly from the northeast, and by the linguistic data and dialect factors, Avesta, the holy book of Zoroastrianism is also from that same geographical area, therefor the parts that have been described in the book are mostly located in the east. 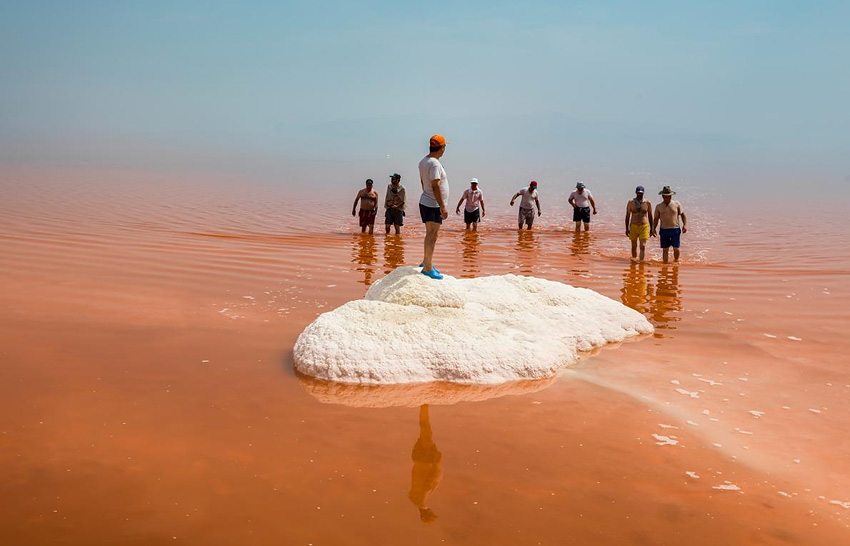 Given the power they wanted, during the Sassanid monarchy, these magi turned the geographical history around and put whatever that was in the east, on the west side of Iran especially near lake Urmia. Bundahishn, the most famous middle Persian text describes Chi-Chast as a Salt Lake that no living being could be found there. Ergo, the most sacred place of Ahura-Mazda’s land where Zoroaster was born, bounces off the east and lands on the edge of this western lake. The geographical location surrounding this lake plus the extent of the lake in the northwest were substantial matters and the life it brought with its self to Azerbaijan was crucial. But during middle Persian times, this lake had only religious importance. After Islam, in Iran’s history, geographers like Ibn Hawqal, Istkhti, and Hamdallah Mustawfi name the plains around Lake Urmia, Urmia, or Orumiye but when it came to the lake they would still refer to it as Chi-Chast. After a very long time, the city Urmia extended and became a major important city. We could only assume that since then, the lake gradually accepted a new name and was called Lake Urmia. Ships and boats could sail and go from one shore to another which was an amazing factor when one considers the commerce that could happen between people. For a long time, during Qajar and Pahlavi dynasty there were prerogatives over who should own the ships and boats. No matter how the arguments around that subject would go, it brought Russia’s trade man and their products closer to Azerbaijanis and what they made.
The unfortunate event for this lake is how mankind could have been so unkind to such beautiful scenery. By the year 2001, the lake lost almost 80 percent of its original extent and now it has become an official problem for the environment. If this lake dries up, there will be a salty desert instead and these tiny salts will have nothing to hold on to. So, with one quick wind, they will spread through all the agricultural lands and put an end to them for good. Another scenario is that all the haze and salt pour down with the rain, caused by the environment and create acid rain which could displace people from their home to other places miles away. If the lake is 100 percent destroyed the fine climate of Azerbaijan would turn up to be just a desert area with warm weather. 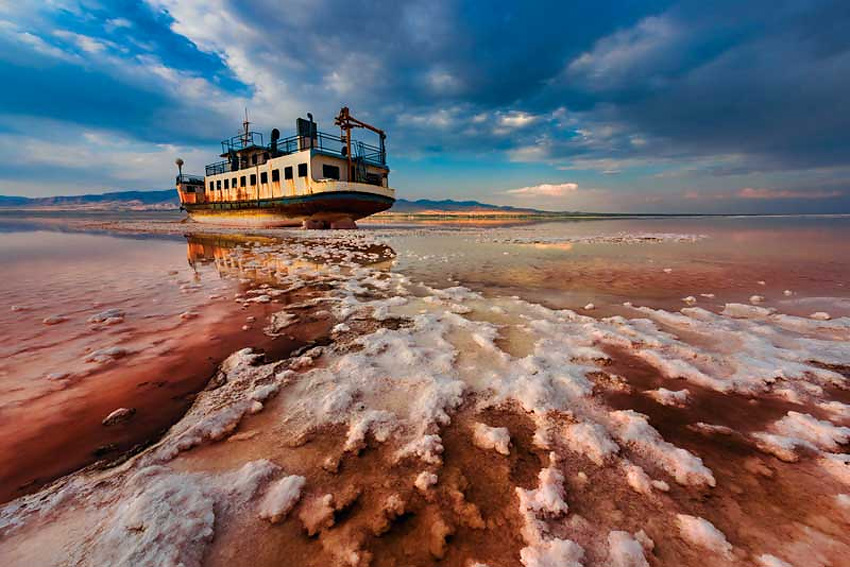 Why did such a thing happen? That’s a better question to answer to avoid risking similar things in the future. Ignorance, using the resource till its full potential, bad managing, the construction of too many dams, and overusing them and mostly building a road-bridge in the heart of Urmia Lake brought out the anger of mother nature. The lake began to shrink in size and lose its water level. The serious revival of Urmia Lake started in 2017. Although these were good efforts, nothing specific changed in the state of the lake. Two years later the hard rains and floods of the year 2019 finally helped. This crisis became a public and international matter and so many environmentalists, even Hollywood famous figures and actors like DiCaprio mentioned the matter above in their speeches. The saltwater of Urmia Lake was no place for any sea creature but so many birds migrated back and forth to their nest and through Lake Urmia as their home. If this extent dries these birds will go away too and so will bird watching tours and photographing and yet another ecosystem will be destroyed.
While trying to revive the lake and undoing the mistakes that were made before, we might have to look back in time to find Lake Urmia’s glory when it had a unique face for itself. The years after that it only became one of the many lakes Iran had and there was no mythical histology to back it up, make it exactly like Chi-Chast, deep, blue, and highly luminous.