Iranians have always admired noble life. while holding to simplicity, they would also want to live in a beautiful environment and to be in touch with beautiful objects. This mindset has contributed to the creation of various handicrafts for use in every-day life. Iran’s traditional arts have survived the passage of time to the present day. At times, Iranians have inspired artists of different nations. Next time when you present a perfume bottle to a friend or loved one, remember that the history of your gift goes back to Iranian artists who would create elaborated perfume bottles for nobles.
There are approximately 320 Iranian handcrafts, some of them have 9000 thousand years of historical background. These include various textile arts, metalwork, pottery, woodwork and leatherwork, among others. Iranian handicrafts fall into the following categories: I. Textile Arts such as traditional braiding and the production of hand-woven textiles like Carpets, Druggets, and traditional Gilīm, Gabbeh and Varni etc. II. Metalworking and traditional chiseling
III. Pottery and ceramic arts
IV. Glass blowing
V. Wood-working, Mo’arraq, Monabbat etc.
VI. Leather products
VII. Jewelry and related arts.

The Persian carpet is an essential part of Persian art and culture. Carpet-weaving is undoubtedly one of the most distinguished manifestations of Persian culture and art, and dates back to ancient Persia. Persian carpets can be divided into three groups; Farsh / ‘Qālī’ (sized anything greater than 6 x 4 feet), Qālicheh (meaning rug, sized 6 x 4 feet and smaller), and nomadic carpets known as Gilīm, (including Zīlū, meaning rough carpet). In a unique archaeological excavation in 1949, the exceptional Pazyryk carpet was discovered among the ices of Pazyryk Valley, in Altai Mountains in Siberia. The carpet was found in the grave of a Scythian prince. Radiocarbon testing indicated that the Pazyryk carpet was woven in the 5th century BC. Pazyryk carpet is considered as the oldest carpet in the world. Its central field is a deep red color and it has two wide borders, one depicting deer and the other Persian horseman.
It believed that the carpet from Pazyryk is not likely a nomadic product, but a product of an Achaemenid carpet production center. In the time of Safavid dynasty, carpet weaving took on considerable progress and flourished in Esfahān, Tabrīz, Kāshān and Kermān. Sheikh Safī Ad-dīn Ardabīlī’s carpet, currently preserved in Victoria & Alber museum in London, is one of the most precious and important carpets in the world. Many other famous Iranian carpets are preserved in the world’s renowned museums. Other kinds of carpets in Iran are called Gilīm, Jajīm ,Gabbeh and Varnī etc. Skillful Iranian carpet-weavers mix wonderful traditional patterns with personal taste and innovation. 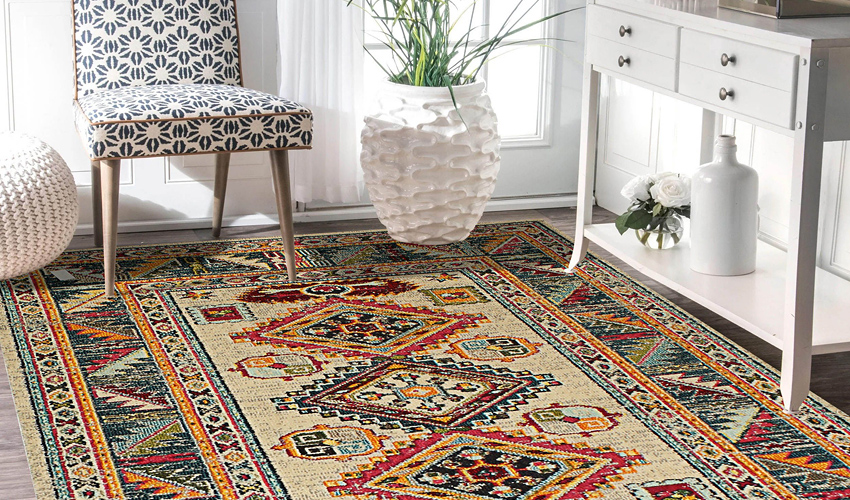 The tradition of weaving cloths by hand goes back to several thousand years ago. In certain rural and urban area, the practice continues its life to the present day. Yazd is one of the most important centers of hand-woven cloths. The woolen clothes of Tabrīz ,Rāmīān and Oskū are famous in the world. Cashmere, velvet and brocaded clothes were weaved in Kerman and Yazd. Country girls weaved these cloths with traditional designs and metallic thread veneers. 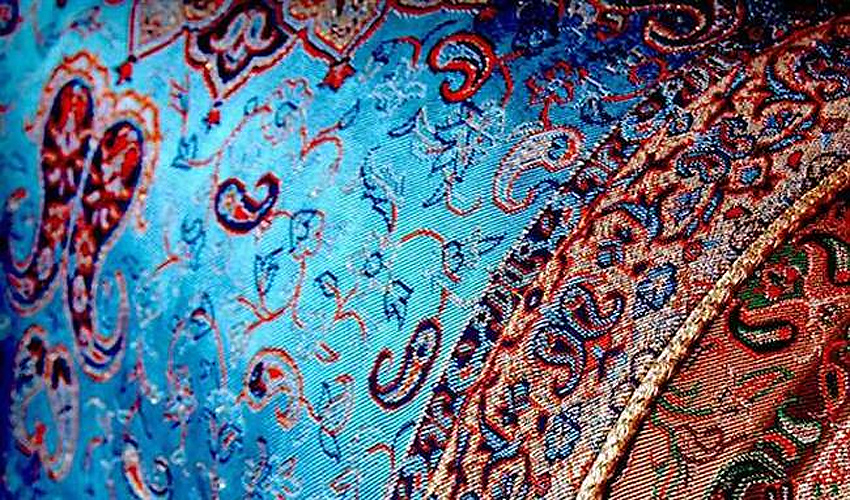 The art of ‘Sūkht’ is one of the best ways of ornamenting the valuable covers of the Qur’ān that refers to the act of printing the desired patterns on the leather by means of a heated molder. In this process the molder that contains the preferred pattern is heated and pressed against the leather in order to transfer the patterns to it. At this time the marks become dark brown and then all the work is gilded so as to produce the eye-catching effect of the exquisite Qur’ān covers. Esfahān is the chief center of this art. 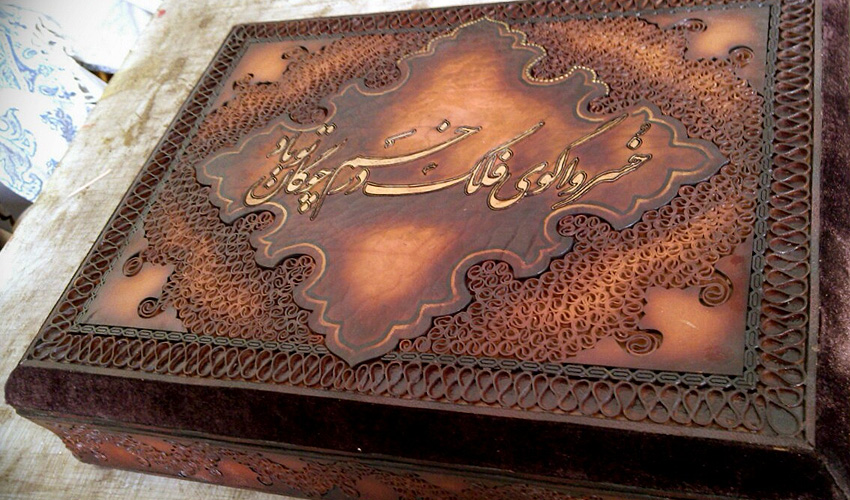 Plenty of wood is found in the Nature. It is also a perfect medium for artistic work. Pottery manufacture has a long and brilliant history in Iran. Almost every part of Iran was, at a certain time, involved in pottery making. Recent excavations and archaeological research revealed that there were four major pottery-manufacturing areas in the Iranian plateau. These included the western part of the country, namely the area west of the Zagros Mountains (Lorestān), and the area south of the Caspian Sea (Gīlān and Mazandarān provinces). The third region is located in the northwestern part of the country, in Azarbāījān province. The fourth area is in the southeast, i.e. the Kerman region and Balūchestān. To these four regions one may also add the Kavir area, where the history of pottery making can be dated back to the 8th millennium BC.

The history of embossing or Monabbat goes back to the Achaemenes era, but it particularly flourished in the Islamic era. Patterns depicting animals or mythical creatures would be carved on gold, silver, copper or bronze.
Gereh Chīnī
‘Gereh Chīnī’ is one of the beautiful handicrafts of Iran in which wooden straw are utilized to make geometrical designs so as to decorate windows, frames, paintings, tables and other objects. The windows that are adorned with this type of decoration are really fascinating. 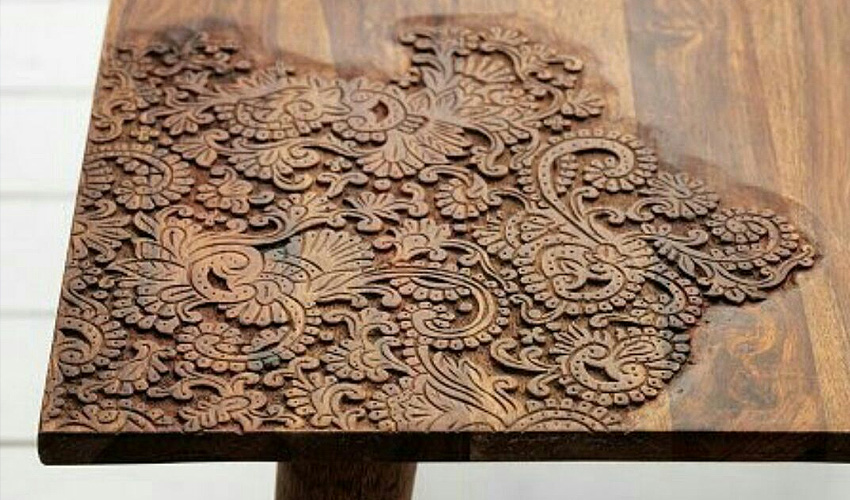 Metalworking has a very long history in Iran. examples of ancient pieces of Persian metalwork include Achaemenid decorative artifacts and Sassanid gold and silver plates. Today, various types of trays, bowls, jugs and other decorative articles are made from silver and bronze. The main branches of the art of metalworking in Iran include Galamzani, Noqreh-kari, Talaa-kubi and Malileh-kari. 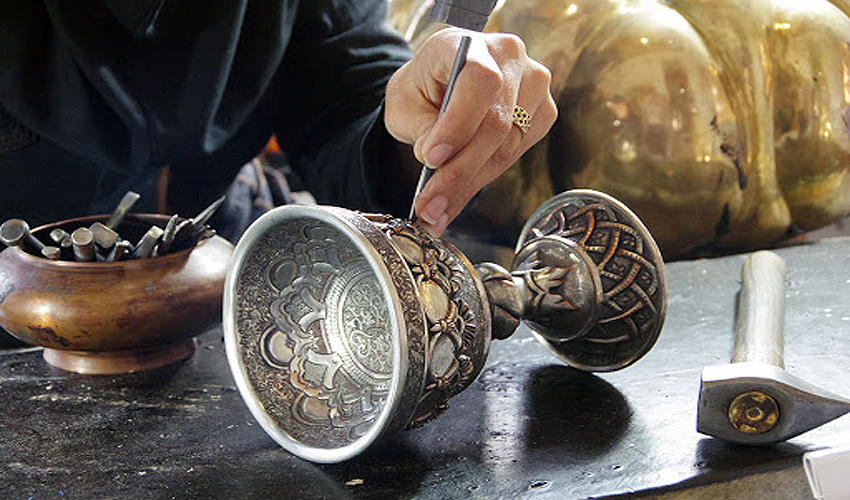 Delicate and meticulous marquetry, produced since the Safavid era: At the time, ‘Khātam’ was so popular in the court that princes would need to learn this technique along with music and painting. khatam means “incrustation”, and “Khātamkārī”, “incrustation work”. This craft consists of the production of incrustation patterns (generally star shaped), with thin sticks of wood (ebony, teak, Ziziphus, orange, rose), brass (for golden parts), camel bones (white parts). Ivory, gold or silver can also be used for collection objects. sticks are assembled in triangular beams, themselves assembled and glued in a strict order to create a 70cm diameter cylinder, which section is the main motif: a six-branch star included in a hexagon. These cylinders are cut into shorter cylinders, and then compressed and dried between two wooden plates, before being cut for the last time, in 1mm wide tranches. so this section is ready to be plated and glued on the object to be decorated, before lacquer finishing. The tranche can also be heated and softened to follow the curves of a rounded object. Many objects can be so decorated, such as: boxes, chessboards, cadres, pipes, desks, frames or some musical instruments. Khātam can be used on Persian miniature, realizing true work of art. 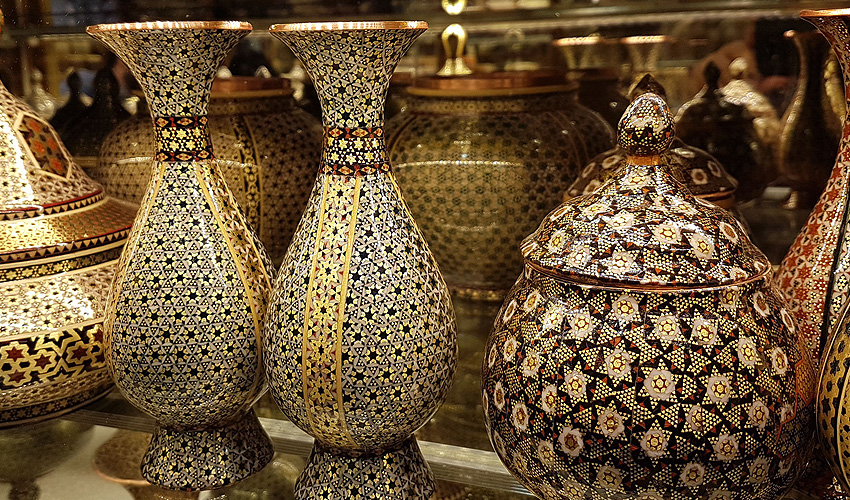 Filigree is a relatively old Iranian handicraft. you can find products in the city of Zanjān. Tea and dessert set, and other decorative filigree articles are made in various regions of Iran.

Iranian pottery production presents a continuous history from the beginning of Iranian history until the present day. ceramic is perhaps the earliest and the most important invention made by man. For historians and archaeologists, it is the most significant of the artistic manifestations representing the social organization, economic conditions and cultural stage of a particular region. Other media, e.g. metal and textiles can be destroyed, or re-used, but pottery is indestructible, and even small fragments reveal a great deal of information for an expert. One of the earliest known and excavated prehistoric sites that produced pottery is Ganj Darreh Tappeh in the Kermanshah region, dating back to the 8th millennium BC Another great discovery was made south of the Caspian Sea in a cave, in the so-called Kamarband, (Belt cave) near present day Behshahr. Here again the pottery finds date to 8000 BC.
with the coming of the Achaemenid Dynasty in the 6th century BC great advances were made in pottery manufacture. The simple ware became more popular and widespread. It was nevertheless in the finer wares that progress is most noticeable. New shapes were introduced, e.g. the rhyton. The surfaces were now decorated with incised and moulded designs. certain prehistoric traditions have survived and continued. This is perhaps best observed in the application of animal figurines. These are attached to the handles of jars and rhytons. The traditions of pottery have continued their life to the present day and you can find many wonderful ceramic works in traditional bazaars of Iran. 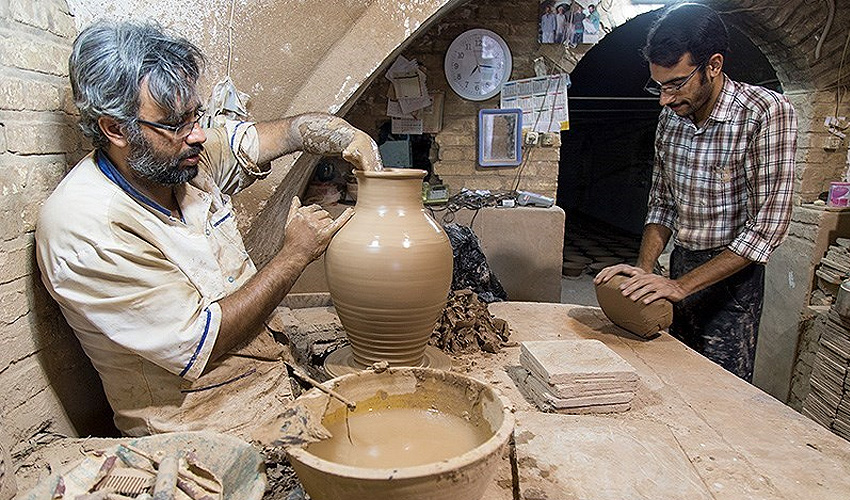 Glass blowing Works or ‘Shīshegarī-Ye Fūtī’ is one of the genuine and traditional handicrafts of Iran that is the art of making glasses, vases, bowls and other objects, by means of melted glass (including silica, pieces of glass, melters, stabilizers and bleach). Prof. Grishman in his excavations found some glass jars with the outer diameter of 2.5 centimeters, the cap diameter of 0.6 centimeters and the length of 75 centimeters. with these excavated glass objects belonging to Parthian and sassanid periods we can say that the glass working industry has been popular at those times. One of the main centers of this craft is ‘Tehrān’. The city of Meymand is also one of the places in which glass blowing works have been prevalent in the past. 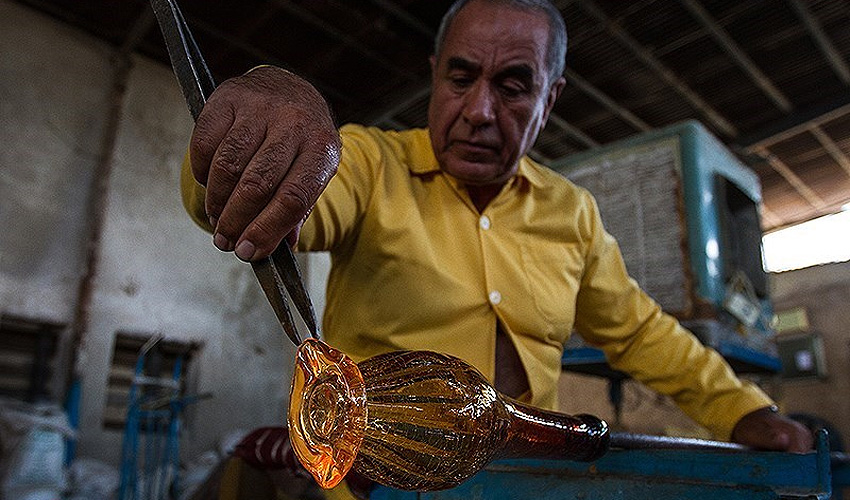 It’s one of the appealing and traditional Iranian handicrafts which is categorized amongst the first group of ‘Rūdūzi’. This is an art which is the specialty of artistic and talented Iranian women. In this type of needlework, abstract floral designs are sewn to the cloths using delicate colorful wool threads usually in black, green, yellow, orange, red, blue and white. ‘Patehdūzī’ is used to make tablecloths, prayer rugs, Quran covers, curtains, saucers and etc. the oldest available sample of this type of braiding is the cover of Shāh Ne’matollāh-e Valī’s tomb in Māhān, which is a very delicate and splendid example; the background of its cloth is milky white and various traditional floral motifs (called Boteh Jeqeh) are sewn to it. This tomb cover is the result of the efforts of 22 women artists in 6 months. 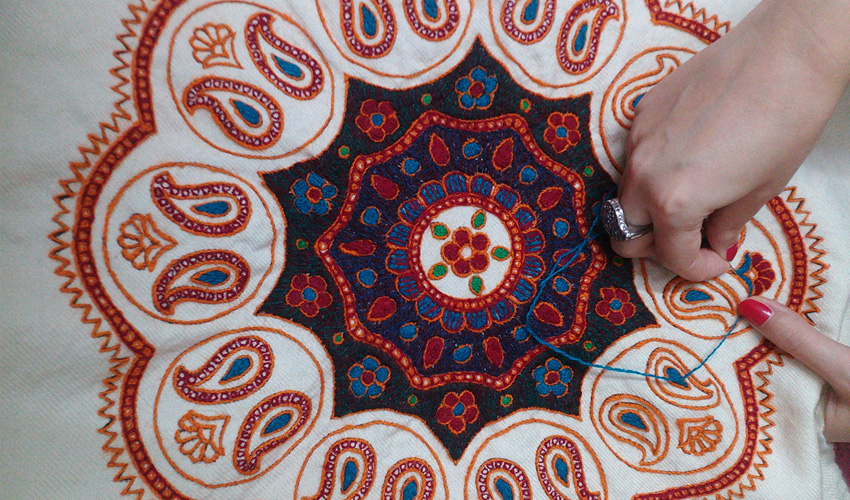 ‘Mīnā’ is one of the most beautiful traditional handicrafts of Iran whose origin dates back to around 2000 BC, when it had originated in Iran. As professor Pope has put it in his book ‘The Survey of Iranian Art’: “enameled working is the brilliant art of fire and soil, with baked, luminous colors that dates back to 1500 BC.” enameled working is done through two different methods; the first method is to turn the colors into soft powder and mix them with water and glycerin, then solve them on a glass surface and finally drawing the desired design on the object, just like an ordinary water color painting. In the second method, however, the colors are mixed with pine tree ink and the objects are painted using oil color technique. Esfahān is the chief center of this enameled work. 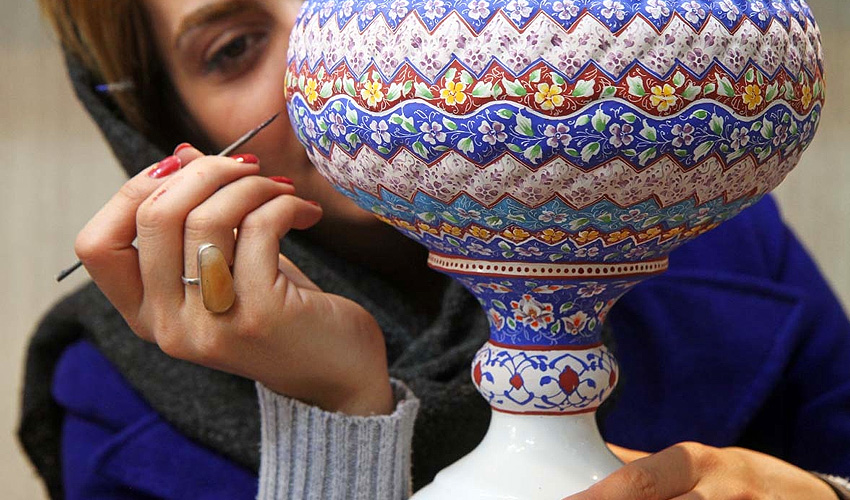