The awesome beauty of Iran’s natural environment and the attractions of the rural way of life have made Iranian villages wonderful tourist spots. Abyaneh, Kandolos, Kandovan, Masuleh, Majan, Mākhūnik Meymand, Qahi, Uramanat, Filband, Palangan, Nay Band, and Kharanaq are a few examples of Iran’s wonderful villages. The natural landscapes, traditional way of life, architecture and handicrafts have turned these villages to unique resorts the like of which nowhere else can be found. Now, let’s take a glance at some of them below.

Abyaneh is a beautiful and old mountain in northwestern foothills of Mount Karkas in central Iran. The village is located halfway from Kashan to Natanz. Abyaneh is situated in a valley; it has cold winters and temperate summers. There are many apples, pear, grapes, and pomegranate trees—trees that are seen as divine gifts by the locals. The construction of Abyaneh, one of the oldest villages located at the edge of Iranian deserts, dates back to 1500 years ago now. Many testimonials to its long historical background are extant today: Masjed-e Jāme’ and its adorned wooden lectern, Masjed-e Porzeleh which is a construction of Il-Khan period, Masjed-e Hājatgah, shah Abbās Khānegah (shah Abbās dervish house), a fire temple, caravanserai, mill, pilgrimage center.

The people of Abyaneh have still preserved their traditional style of architecture. The architecture of Abyaneh and the houses’ exterior decorations are very interesting— the villagers use red clay from nearby hills to paint the walls. red houses, many-colored dresses of village girls and branches of trees that hang from the walls to watch the alleys—these have made Abyaneh a perfect resort from the fanfare of modern city life. 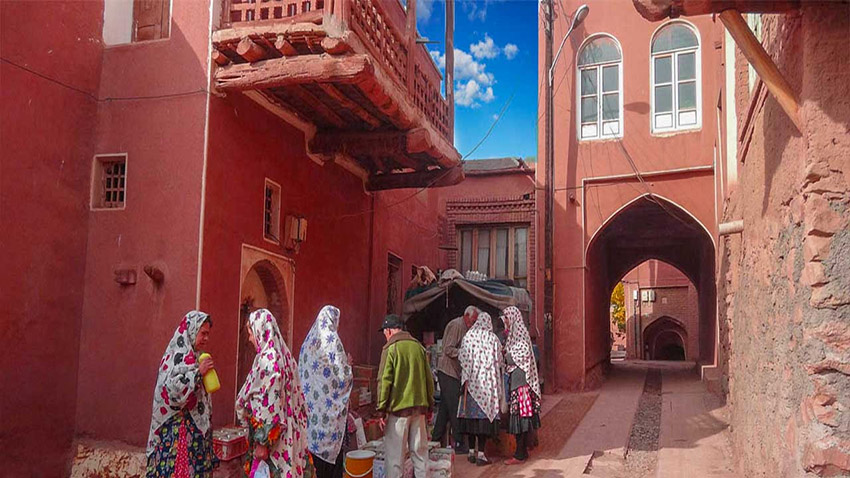 Mojan is a village in mountainous areas of Iran, 35 kilometers to the northwest of the city of Shāhrūsd. It shines like a jewel on the foothills of Mount Shākūh. The climate is freezing cold in autumn and winter but temperate in spring and summer. There are a number of archaeological sites, castles and other historical monuments near the village. There are also two old cypress trees called Sūr (or Sarv) by the locals. Beautiful natural sceneries and unique styles of architecture have turned Mojan into a cozy tourist spot. The traditional clothes of the people of Mojan are also interesting and beautiful. Both men and women use special traditional cloths whose origin goes back to a long time ago.

Masuleh is a beautiful village built on the foothills of the Talesh Mountains in the Caspian coastal belt of northern Iran. The most important feature of the village is perhaps its architecture: the houses are built in a stair-like structure such that the roof of each house is the yard of another one and the pavement of the village. Masuleh women adorn the windows with flowerpots and this gives a unique beauty to the village. The main bazaar of Masuleh would also be attractive to tourists: there you can see handicrafts being made by traditional artisans—Masuleh handicrafts can be a proof of your visit to this beautiful village in evergreen land of Gīlān. 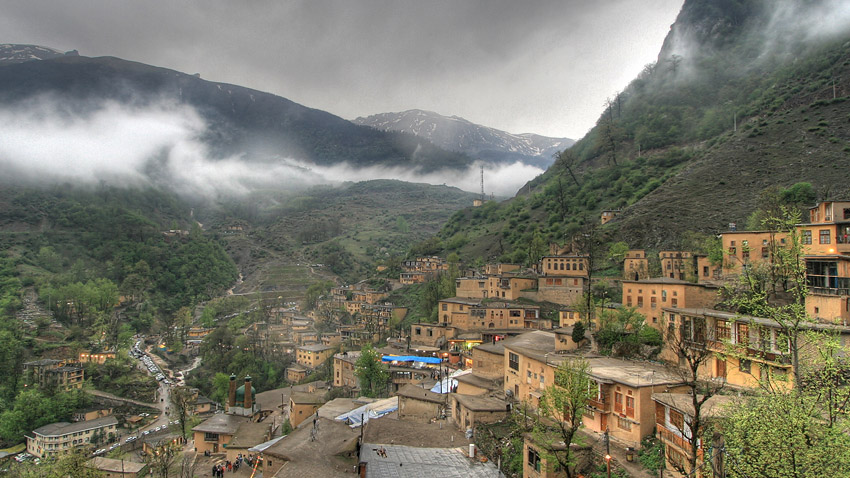 On the foothills of Mount Uramanat and Mount Pāveh in Western Iran lies the ancient Uramanat, an ancient village of dominantly Kurdish population. It is well-known for the wonderful beauty of its natural landscape. The land of Uramanat is covered with pomegranate, walnut grapes, and fig orchards, In Uramanat, you will be intoxicated by tunes of the Tanbur—an Iranian lute most beloved of dervishes.

Wonderful villages are not to be found only in the central Iranian plateau but also in other places such as the shores of the Persian Gulf. Laft village is located in Hormozgān Province. Laft might seem like other villages of southern Iran, but a little attention and curiosity would reveal the difference. Laft is covered by Harrā mangroves (Avicenna Marina), significantly adding to the beauty of the beaches. next to Harrā mangroves and the cobalt blue waters of the Persian Gulf, you can see the landscape of a desert which reminds one of the central deserts of Iran. Rocks and mountains of the Qeshm Island are amongst the sceneries of the Laft village. the architecture of Laft is in harmony with its climate. narrow alleys and traditional ventilation systems reveal the knowledge of the people of Laft.

Kandovan is situated 62 kilometers away from tabrīz on the road to oskū. the people of Kandovan are of an Azari origin and speak Azari language. the village is a cozy tourist resort situated in a green dale. the most important feature of Kandovan is perhaps its unique, ancient architecture: the houses are carved into the rock and some of them have been residential since over 700 years ago. Archaeologists believe that the history of the village goes back to pre-Islamic times. today, you can rent some of its inside-the rock houses are tourist resorts. 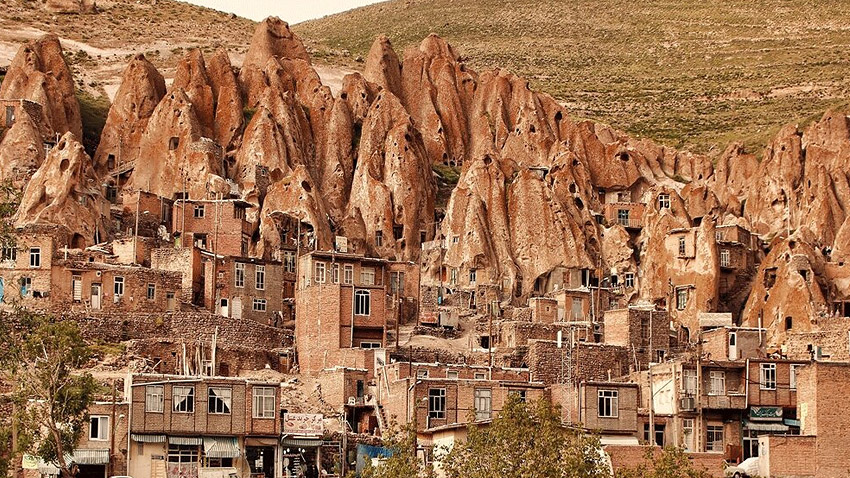 In Kermān Province of southeastern Iran there lies the wonderful village of Meymand near the town of Shahr-e Bābak. the fabric of the village is very old. the people of Meymand have a special way of life: they carve their houses inside the rocks and they are connected to each other through corridors. The stone fortress of the village is one of its main tourist attractions. It encompasses an area of about 400 square meters and consists of 15 circular-shaped rooms without roofs. the mosque of the village is also interesting for visitors.

On the green foothills of Alborz Mountains in Mazandarān Province, where clouds embrace the mountaintops, there lies the beautiful village of Kandolos. wood is an essential element of the traditional architecture of Kandolos. the fabric of the village is comparatively intact which greatly enhances the attraction of the site. the access route to Kandolos from the Tehrān-Chālūs Road passes through Marzan-Abād and turns towards the east. the village bears the mark of Iran’s historical periods. the village owes its beauty mostly to its natural surroundings, however. snow-covered mountaintops, forests on the foothills, and moderate subtropical climate of the village, as well as its museum and Medical Herbs Garden, have turned Kandolos to one of Iran’s wonderful villages.

In Mazandaran province, the Filband village is one of the most beautiful countrysides of Iran, resembling a legendary tale. The village lies above the clouds and you’ll enjoy watching the clouds moving playfully below the village. the village offers a great view of the surrounding lands, when the weather is clear and sunny, as it is located at the highest point of the region.

Watching sunrise and sunset in Filband village would be astonishing and an amazing experience, especially when the sun goes down in the clouds and colors them with its wonderful light. The tranquility of the village and the slow rhythm of life turns it into one of the best places for escaping from the fast-paced life of the city. Because of the altitude of the region, the best time to visit Filband starts from late May and ends in October. 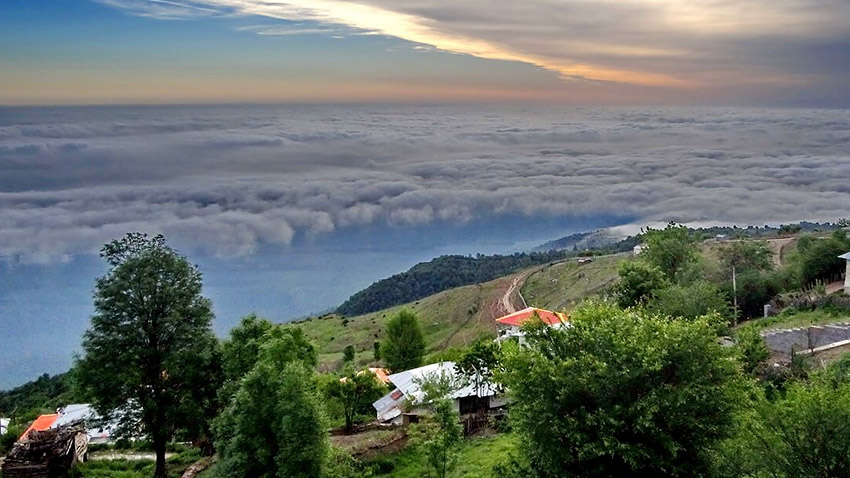 On the slopes of Mount Shahu at the Uraman-Takht region in ​​Kurdistan province, the stair-stepped village of Palangan lies, and The architecture of this village resembles Masouleh, yet the Kurdish culture makes this location very unique. The houses lie on the eastern and western slopes of the valley where a beautiful river flows. The history of Palangan dates back to the Samanid era and the ruins of a castle from the Seljuk period still exist on top of the village. Palangan means a place with leopards because the mountains of this region were once the habitat of many leopards which no longer exist.

The 4,000-Year-Old Abandoned Mud-Brick Town of Kharanaq Settled at a distance of 85 km. east of Ardakan in Yazd Province. This village has a temperate dry climate and is located in a mountainous region. Kharanaq, which means “place of birth of the sun”, is divided into two parts: The Old Town, which is almost completely deserted, and the New Town, where some 130 families continue to live. One of the most visible monuments in the city, and one of the few things around that has been restored is the 15-meter-tall Shaking Minaret of Kharanagh. Dating back to the 17th century, the minaret can frequently be seen vibrating.

If you’re up to seek the allures of Dasht-e Lut desert, you can’t skip visiting the wonderful castle-like village of Nay Band. Just imagine going up the cliffs in this village and taking a glance at the sun while it’s sinking in the ground behind the wheat fields dotted with palm trees. In this village, houses are densely built on a small mountain and the village is encircled by the gardens of palm trees and farms ground. So that it looks like petite heaven in the middle of the desert. What grants life to this beautiful miniature village at the heart of the desert is the spring waters flowing in it. 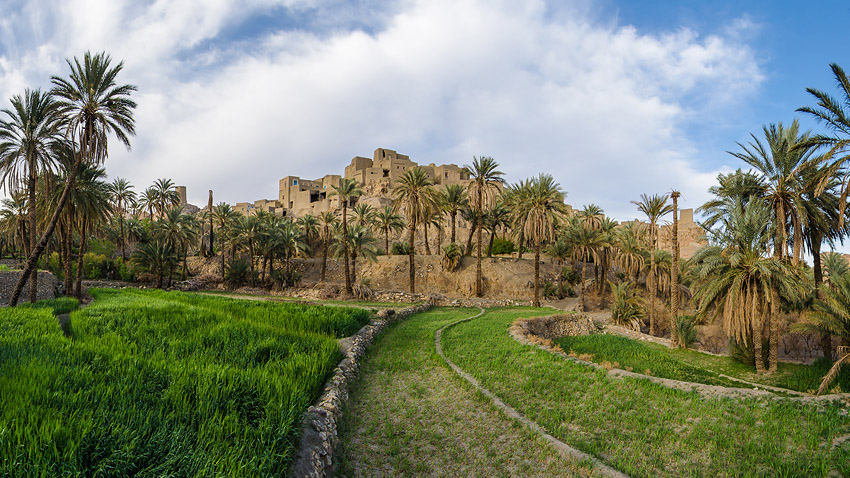 Iran The Land of Cure
Scroll to top