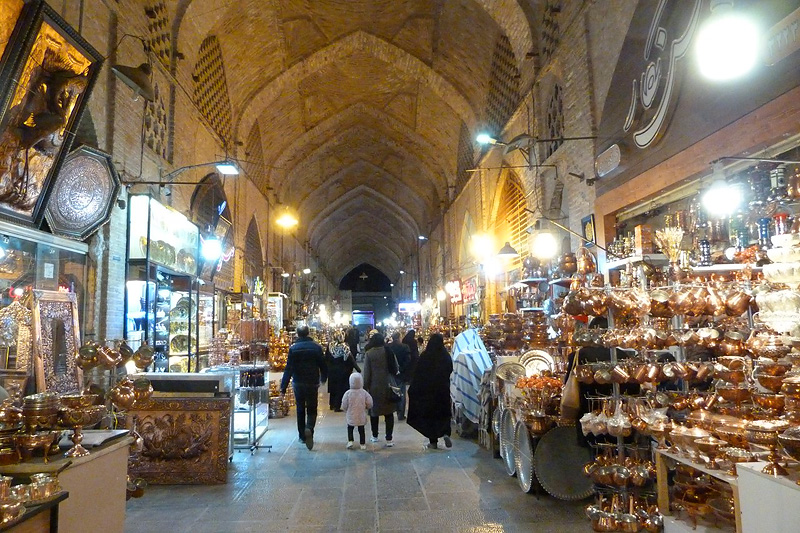 In Iran bazaar is not only a shopping center but also since a long time ago bazaar had certain specifications, which cannot be seen in other parts of the world. The Grand Bazaar of Isfahan is a completely covered town. The old Isfahan society was concentrated around the Bazaar.

The bazaar is a trade and business complex close to all facilities necessary for a town. Bazaar and people who work in Bazaars have always been close and faithful to religions, cultures, and traditions.

In short, almost all activities of the city were concentrated around bazaars. There are various places and establishments regarding the social affairs of people connected to the bazaar.

The Grand Bazaar of Isfahan is a completely covered town. When entrances to the bazaar were closed, all facilities were available behind these closed gates and doors.

The Grand Bazaar consists of the main axis and various smaller branches. There are crossroads or lanes which are called Char- Su (four directions). Each lane of the bazaar is just like a grand tree that has several branches.

One of the main entrances to the Grand Bazaar is located in the north of the square. Not only the Bazaar has various lanes (branches) but also the main axis is connected to the Seljuk town (the old town). The axis passes in the neighborhood of Jame mosque.

In each lane or branch, there are entrances to various Hojreh (shop) specializing in particular goods.

There are Caravansaries inside the Bazaar. Usually, each caravansary has a rectangular shaped open courtyard. A smaller place similar to caravansary is called Timcheh. There are different Timchehs in the bazaar. There are even theological schools in the Bazaar. The old type of public bathhouses and several other structures can be seen in the Bazaar.

As mentioned each lane (branch) is specified for manufacturing and selling a certain type of goods, such as carpet, shoes, spices, gold, silver, handicraft bazaars.

Have you ever seen Toghrol Historical Tower in Iran?
Scroll to top