Have you ever seen Toghrol Historical Tower in Iran?

The Toqrol tower is located east of the Ibn Babuye mausoleum in the city of Rey. This cylindrical tower in brick, mortar, and cement (probably by Mohammad Amin Me’emarbashi) was built in the Seljuk period (9 centuries ago.).

The height of this tower that in the past also had a circular dome that has been destroyed is almost 20 meters and its area exceeds 48 square meters and has two wooden entrances, one northern and one southern. In front of one of them, there are cat prints on which if it stops, above the head you will see an image similar to the open mouth of a lion.

The lion was a symbol of power, magnificence, and beauty in the Seljuk period. Stairs in the north wing of the building join the lower and upper parts of the tower together.

Among the scholars, there is a difference of opinion on the fact that this tower was the mausoleum of Toqrol Beik Selgiuchide (founder of the homonymous dynasty), of Khalil Soltan (among the sons of Tamerlano) and his wife Shadolmalek, of Fakhraldouleh Deilami, or of Ebrahim Khas.

In the past, on the palisade of this tower when the fire was lit, evening guided the travelers of the Silk Road who came to Rey coming from Khorasan, and the tower was also used as a voice amplifier; in fact, the walls were built in a way that the voice echoes and is amplified. And if he who speaks or listens to the center of it, his voice resounds throughout the tower like an echo and is heard up to a certain distance.

This tower is also a kind of solar clock. The external environment has Xnumx pinnacles with an acute angle and if you are standing in front of its entrance, it seems that a lion with an open mouth looks at us. When the sun rises, the pinnacle to the east lights up and the sun shines inside.

After half an hour, half of the pinnacle lights up and an hour later. In this way, the number of lit pinnacles appears as hours spent by the sunrise. Until noon when the sun is exactly above the southern portal of the tower and positioned on the local meridian, it reaches the highest height of the horizon. Then the pinnacles in the west begin to light up. In addition to this, you can also see, thanks to the height of the shadow on the outer walls of this building, an astronomical tower where the sun is placed. 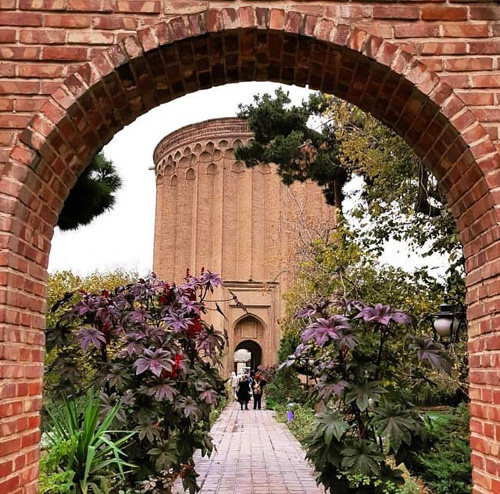