Barbod the great of the 7th century (A.D.), a court musician of the Sassanid empire, created the first-ever musical system in the Middle East, known as the “royal Khosravānī,” dedicated to the king Khosrau II. Many current names of the modes used in Iranian classical music, Dastgāhs, have survived from that time by an oral tradition, though many of the modes and melodies have disappeared. Iranian classical music relies on improvisation and composition and is based on a series of modal scales and tunes which must be memorized. Apprentices and masters (Ostād) have a traditional relationship which has somewhat declined during the 20th century as music education moved to universities and conservatories. 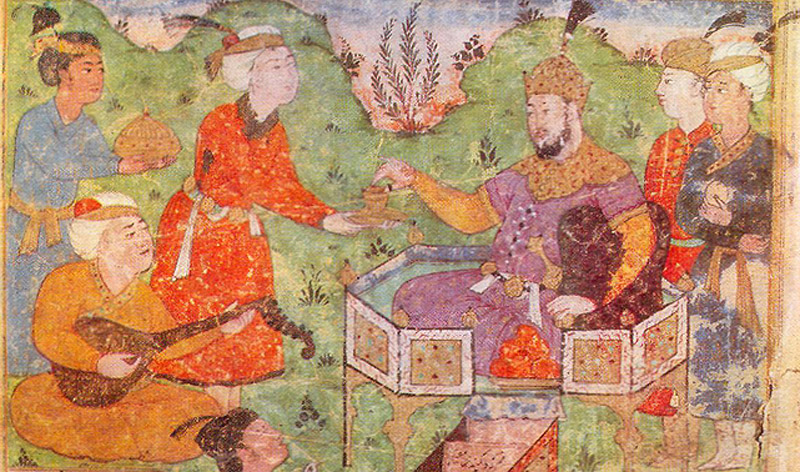 A repertoire of more than two hundred series (Radīf) is divided into short melodic movements called Gūsheh, which are themselves divided into twelve Dastgah. each Gusheh and Dastgah has an individual name. A typical performance consists of a Pishdaramad (prelude), Daramad (introduction), Tasnif (song), Chaharmezrab (rhythmic), Reng (dance), and a chosen number of Gusheh. A performance forms a sort of suite. The Gusheh and Daramad are non-metric and rhythm-free, while the Tasnif, Pishdaramad, Reng, and Chaharmezrab are rhythmic.

Unconventionally, these parts may be varied or omitted. Towards the end of the Safavid empire (1502-1736), more complex movements in 10, 14, and 16 beats stopped being performed. In fact, in the early stages of the Qājār Dynasty, the Usul (rhythmic cycles) were replaced by a meter based on the Ghazal and the Maqām system of classification was altered to the Radīf system which is used to this day.

Today, rhythmic pieces are performed in beats of 2 to 7 with some exceptions. Many melodies and modes are related to the Maqāms of Turkish and Arabic music. Books written by Iranian musicologists, such as Farabi’s Kitab al-Musiqi al-Kabir, have influenced the music cultures throughout the Islamic world. Iranian music has influenced the music of various countries greatly since the Sassanid times, which provides a reason why melodies within the classical music of Turkey, Syria, Iraq, and Egypt bear the names of some Iranian modes. Classical music is vocal based. The vocalist plays a crucial role: she or he decides what mood to express and which Dastgāh relates to that mood. In many cases, the vocalist is also responsible for choosing the poems to be sung. 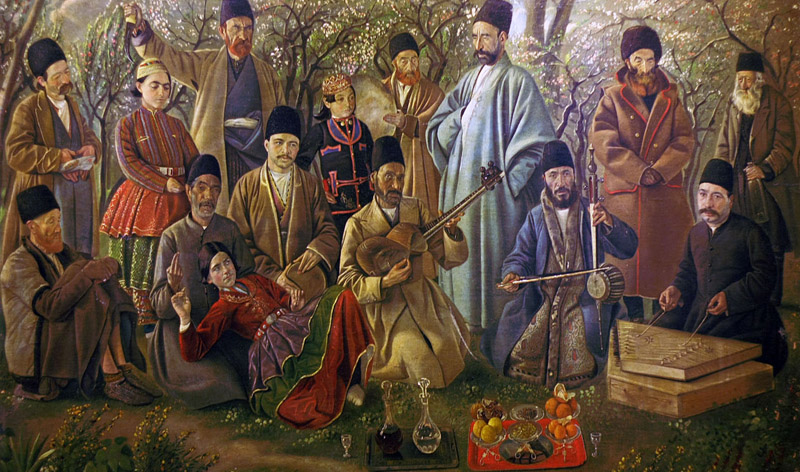 If the performance requires a singer, the singer is accompanied by at least one wind or string instrument, and at least one type of percussion. There could be an ensemble of instruments, though the primary vocalist must maintain hers or his role. At times, the musicians may accompany the singer by singing along several verses. Traditionally, music is performed while seated on finely decorated cushions and rugs. candles are sometimes lit. The group of musicians and the vocalist decide on which Dastgāhs and which of their Gūshehs to perform, depending on the mood of a certain time or situation.

Before the Muslim conquest, the melodies in which recitals from the Avesta were chanted or sung were fitted into modes. The term “Gāh” has two meanings: in the Pahlavi (Middle Persian) language, it means both “Gāth” (a prayer from the Avesta) and also “time.” Modern-day musicians tend to attribute the meaning of “Gāh” strictly to “time” or “place” in regards to movements on an instrument. The modes “Yekgah, Dogah, Segah Chahargah, Panjgah, Sheshgah, and Haftgah” were used to recite this one through seven.

Recently, it was discovered that the mode “Rāst” (lit. truthful) was used while singing stories of truthful acts or people, and “Shekasteh” (lit. broken) was used in telling stories of evildoers. The mode “Homāyūn” was used while reciting morning prayers. Most of these modes, except probably for “Sheshgāh” and “Haftgāh” still exist in the system today. However, it is virtually impossible to know how the music sounded during that era. So while the names of the modes can be traced to antiquity, no conclusion can be reached on the similarities of their sounds.

After the Sassanid era, it is obvious that newer melodies were created in various periods, probably through hundreds of years. when Islam became the dominant religion of Iran, rulers decided to either ban music or to later discourage people from the recital of Mazdean prayers in those modes. Classical music was performed strictly in court up until the 20th century. It was performed in secret during the rule of Islamic extremists of the medieval era. Iranian classical music continues to function as a spiritual tool as it has throughout its history. Compositions can vary immensely from start to finish, usually alternating between low, contemplative pieces and athletic displays of musicianship called Tahrīr. The incorporation of religious texts as lyrics were replaced by lyrics largely written by medieval Sufi poets, especially Hāfez and Jalāl-e Dīn Rūmī.

Instruments used in the Persian classical music include the bowed spike-fiddle Kamāncheh, the goblet drum Tombak, the end-blown flute ney, the frame drum daf, the long-necked lutes Tār, Setār, Tanbūr, Dotār, and the dulcimer Santūr. the ordinary violin is also used, with distinctively Persian tuning. Harps, “Chang[s],” were a very important part of music up until the middle of the Safavid empire. they were probably replaced because of tuning problems or replaced by the Qānūn (Zither) and later the piano which was introduced by the west during the Safavid Dynasty. Many, if not most of these instruments originated in Iran.

Perhaps the most-loved Persian string instrument is the tār. tar players are regularly chosen to function as the primary string instrument in a performance. the Setār is also loved for its delicacy and is the favorite among Mystic musicians. Some instruments like the Sornā, Neyanbān, Dohol, Naghareh, and others, are not used in the classical repertoire but are used in Iranian Folk music. Ghazhak (Ghaychak), a type of fiddle, is being re-introduced to the classical field after many years of exclusion. the instruments used in the classical field are also used in Iranian Folk Music. 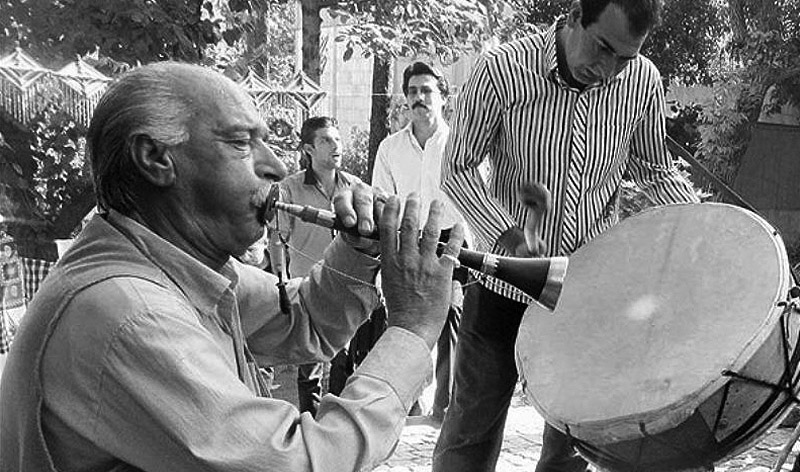 The most popular form of entertainment in Iran is the cinema. cinema is also an important medium for social and political commentary. Iran’s film industry became one of the finest in the world, with festivals of Iranian films being held annually throughout the world. Directors Bahram Bayzai, Abbas Kiarostami, Mohsen Makhmalbaf, and Dariush Mehrjui produced films that won numerous awards at international festivals, including Cannes (France) and Locarno (Switzerland), and a new generation of women film directors— among them Rakhshan Bani Etemad (Blue Scarf, 1995) and Tahmineh Milani (Two women, 1999)—has also emerged. Fajr Film Festival is arranged annually in Tehrān and has gained international recognition in recent years.

Iranian and foreign films are screened and are awarded. The nearest thing to the theater in Iran used to be the religious re-enactment of holy stories, known as Ta’zie, but theater in European style was introduced to Iran only in the second decade of the 20th century. Initial work was concentrated in Tehran and Rasht. The quick advent of cinema and, later, Television in Iran soon after the introduction of theater left little initial opportunity for the latter’s development.

The first cinema hall was constructed in Tehran in the late 1920s. However, foreign films were the only source for cinemas, and these were shown with sub-titles. Dubbing into the Persian began in 1948, while serious shooting of Iranian films did not begin until 1950. Iranian young cinema society was founded in 1974 and its statute officially was approved by the then Supreme consultative of culture and Art in 1975. But it was after the Islamic Revolution of Iran that the society started its activities with new policies and aims in 1985 which as follows, to flourish the creativities and talents of the enthusiastic youths who are interested in film making and photography concerning the national and Islamic culture and values. To train enthusiastic youths to improve their cine culture.

To conduct the processes of film making, and amateur photography in Iran. In the beginning, Iranian young cinema Society mainly focused its activities on producing 8 and 16 mm films through establishing training courses, thereafter, holding regional and annual festivals were also taken into consideration in the frame of its programs. Society started its activities along with its four offices in Tehran and at present, the society has established fifty branches throughout the country. 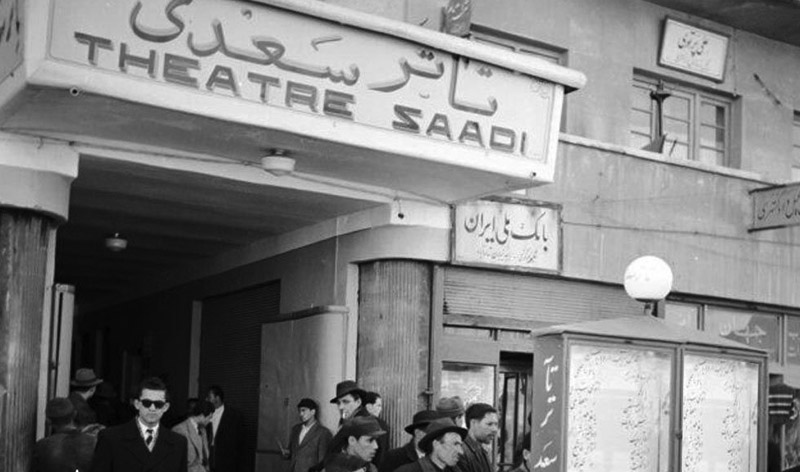 Protests, then a pandemic: Can Hong Kong tourism hang on?

Gashttour Health Measures During the COVID-19 Pandemic in the Transportation...
Scroll to top