I am the Cyrus, The king, The Achaemenian.

These simple but dignified words carved in three languages and repeated on several blocks that lay scattered about the plain of Murghab is the only available inscriptions we have in this city of Pasargadae about the Mighty Lord of Asia, Cyrus the Great. This plain, some 16 miles (25 kilometers) long and 9 miles (15 kilometers) wide is generally acknowledged as the site of the classic Pasargadae, the Royal Capital of Cyrus the Great. It was on this plain that Cyrus fought his most decisive battle against his Median Overlord Astyages, whom he defeated in 550 B.C. and it was here that he laid the foundation of his capital “Pasargadae”. Pasargadae is about 50 miles to the north of Persepolis, the Imperial Capital of the great Persian Empire ruled by later kings of the Achaemenian Dynasty, the Dynasty founded by Cyrus the Great. The advance of centuries across the dial of eternity has been unable to obliterate the evidence of the magnificence of Persia even in the plain of Pasargadae, though it has suffered much from the relentless hand of time. There are several interesting sites to be seen by visitors and studied by scholars, beginning on the hillock known as the Takht-e-Suleiman or the Throne of Solomon. 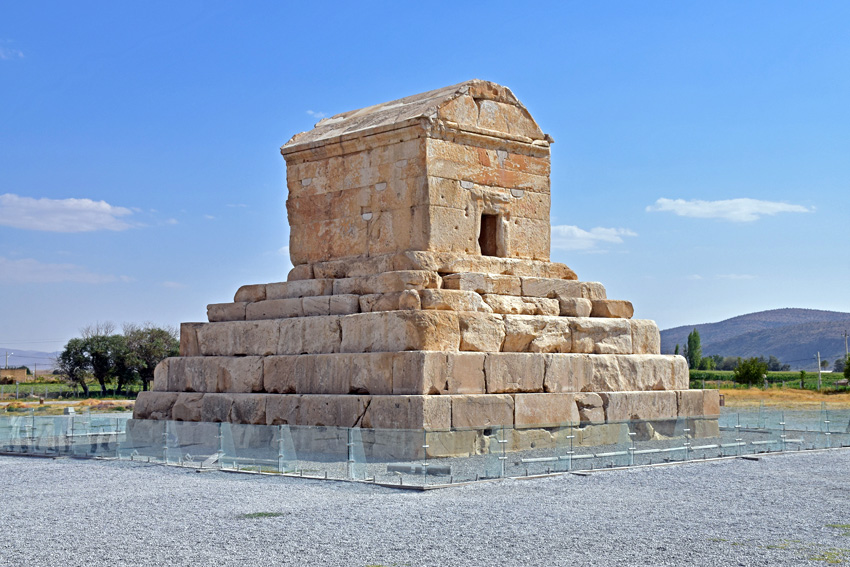 This is a huge and outstanding stone platform over 250 feet long (80 meters) and 50 feet wide (18 meters). It is believed to have been the foundation for a palace. This platform is about half a mile from the last point to which a car can travel. When traveling by car turn right at the end of the narrow road between Pasargadae and Tehran – Shiraz road. At the foot of the hillock, the remains of a building Similar to the one at the Naqsh-e-Rustam Necropolis near Persepolis can be seen. This building and its purpose is a matter for dispute among orientalists and archaeologists. Some say it was a fire altar, others assert that it was a tomb and some argue that it was a shrine of some sort. The existence of two identical buildings, one in Pasargadae and one in the Persepolis area, is, however, significant. There are no tombs near the Pasargadae building and it is thought that it probably housed the sacred book and the arch-priest during religious ceremonies. Here, as in the case of the Throne of Solomon, the Mohammedan tradition (1,000 years later) has overlaid earlier history and the building has come to be known as the Prison of Solomon. Even the tomb of Cyrus is called Maritirum or “Mother of Solomon”, This was a ruse used by the Persians to make the fanatical Arab invaders respect these buildings and spare them from destruction.

To the southwest of the Prison of Solomon, the remains of a palace, called the Eastern Palace, can be inspected. No exact date can be given either for this building or the two other palaces situated to the northwest of it. It is probable, however, that this was the first of the Achaemenian palaces built in an original Persian style. Large white slabs of stone were used for the floor and the roof was supported on eight columns, the bases of which were uncovered in 1951. The area of this palace IS 594 square meters (22 x 27 meters). It is in this palace that the famous bas-relief of Cyrus the Great, is to be found (So far it is the earliest known example of Achaemenian carving.) Travelers who saw this monolith – Morier in 1802, Kerr Porter in 1821 and Flandin in 1841 related it in their books and made copies of the inscription engraved on top of this huge block. This inscription “Adam Kurush Khshayathiya Hakhamanishiya” was found in other palaces too. The figure shows Cyrus the Great wearing a curious Egyptian crown, an Elamite robe, and four fanlike wings. The monolith is approximately 9 feet high (2.9 meters). The best time for seeing this carving and for the photographing it is after 4 p.m. in the winter and 5 p.m. in the summer.

The private palace of Cyrus

To the west of the Eastern Palace, two other palaces have been excavated in recent years. Only one column, a few shafts and several blocks of stone were to be seen here until a few years ago. However, the diligent efforts of the Persepolis Institute of Fars have uncovered the outlines and foundations of two magnificent palaces. The wall surrounded them has been constructed to protect them. The larger of the two palaces is known as the Private Palace and is almost 3,500 square meters in area (44 x 77.50 meters). The other building now known as the Audience Hall is 2,400 square meters in area (44 x 56 meters). The palaces are almost identical in design. The Private Palace had a central hall with two long colonnades on the west and east. On the door jambs of the central hall, figures of the King were carved, but only the lower halves of these have been found. 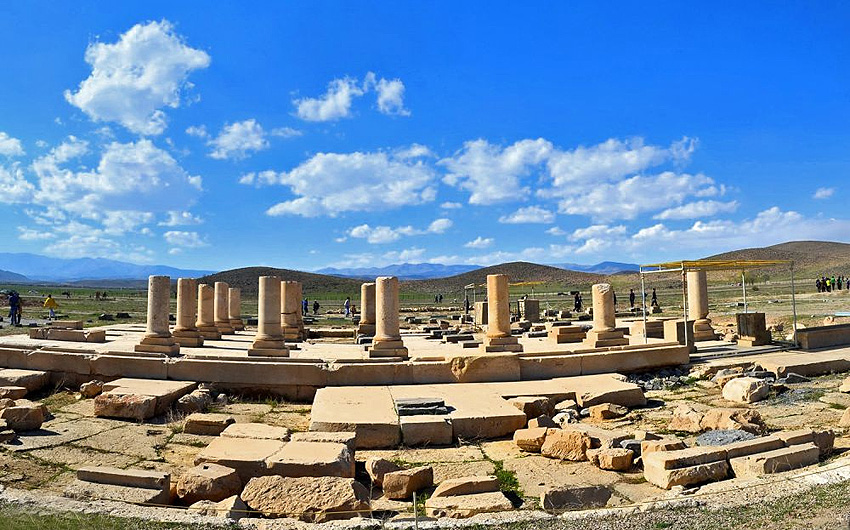 The palace of the Audience

The large hall of this palace had eight beautiful columns and there were four balconies or covered verandahs, one on each side. These verandahs were colonnaded and the northern side was the largest and longest with a total of 48 columns. The floor area of this large hall is approximately 7,000 square meters (32 x 22 meters) Of special interest in this palace are the carvings on the door jambs, the shafts of stone at the end of the colonnades (which bear the inscription quoted on page 13 in three languages) and the very pleasing combination of white and black blocks of stone at the base of the columns Only one column is now standing. No trace of any capital has been found, though the body of an animal in a form similar to those found at Persepolis, suggest that the columns bore capitals of the double-headed bull or lion motif. The carvings on the door jambs are believed to be that of the Fish God EA but how or why this motif was carved here is not yet known.

Mausoleum of the great king

On completion of the tour of the northern part of the Pasargadae plain, it is time to see the main object of this site, the Tomb of Cyrus the Great. This entails walking some distance over the rather dusty plain. Although there is nothing here to be seen it is firmly believed that all this area was occupied with gardens, pavilions, fountains and other buildings. It is such a place where one can imagine the gardens and avenues leading to the impressive and revered Mausoleum of Cyrus. This solid piece of masonry has been standing here for 2,500 years. The plinth is 13 meters long and just 12 meters wide. The seven broad steps leading up to the sepulcher are respectively 70, 70, 70, 2, 53, 54 and 53 centimeters in height. The sepulcher itself 5.24 meters long and 5.30 meters wide is about 6 meters high measuring to the top of the roof. Historians from 200 B.C. have mentioned this tomb. Another historian says the tomb was inscribed “I, Cyrus, The king of kings, lie here “and such an inscription seems more in keeping with the dignity of Cyrus the Great. Today, however, there is no trace of any inscription except a few sentences in Arabic carved at later dates by Muslim kings both inside and outside the sepulcher.

The entrance is low and narrow and the Mausoleum is now quite empty. There is no trace of a sarcophagus nor any of the treasures that undoubtedly surrounded Cyrus at his entombment. The best time to see the Tomb of Cyrus the Great is towards sunset when the light of the setting sun gilds the inside of the tomb. In the evocative atmosphere, the imagination can conjure up some pictures of the last obsequies for a great King. 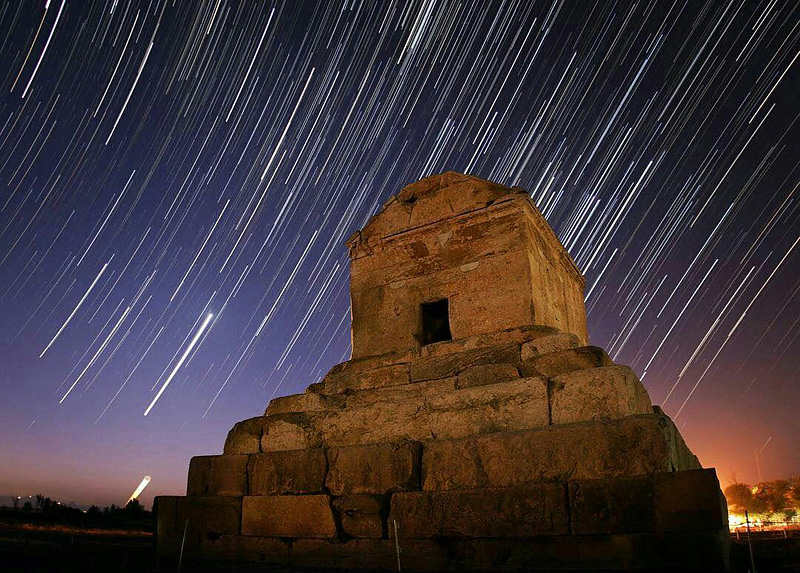