There is something visionary, romantic, and extreme about Persian gardens, a thing that could be historical, logical, and valid at the same as mythical and not belonging to this earthly world. Whatever design and pattern, Persian carpets or tiles have, are a reflection of the Persian garden. Over the past decade, science has become the only way of explaining things and the world’s phenomena. It is so that it’s trying to analyze even human cultural heritage with such perspective. If we are to do so, we will certainly lose the main part of our ancestor’s worldview and subsequently, nothing will make us wonder anymore.

Persian gardens could be only a way of decorating, designing, and a mold for gardening. It is as if earlier Persians came to the decision that where they’d like to grow their plants has to have a special shape and so, they created the Persian garden. From such a point, we could only be aware of the mechanics. If that is the case, the whole world becomes a piece of huge machinery with a handful of bolts with no other attraction. These days, science can no longer be the one and only answer to human’s deep needs. We have to march back a few decades or even some millennia to find the left out the meaning for life which we all seem to lack today. Persian gardens are not limited to a number of beautiful, ancient, and pleasant gardens that have made their model of gardening unique. There’s much more.

Myths were and still are one of the ways of coming to an understanding of the world and how it’s working. In these myths, there is an image from ancient Iranians about their ideal land, a Utopia called “Airyanem Vaejah”. This image was exactly like a well-ordered, green, and fenced garden.

Perhaps the first documented landscaping of these gardens was what Cyrus the Great formed in his Pasargadae, but the idea behind gardening goes back to his ancestors. Of course, this discussion is more tangible in Persian because the English-speaking reader is not familiar with the Persian words but, there is no one who has not heard of Baghdad! 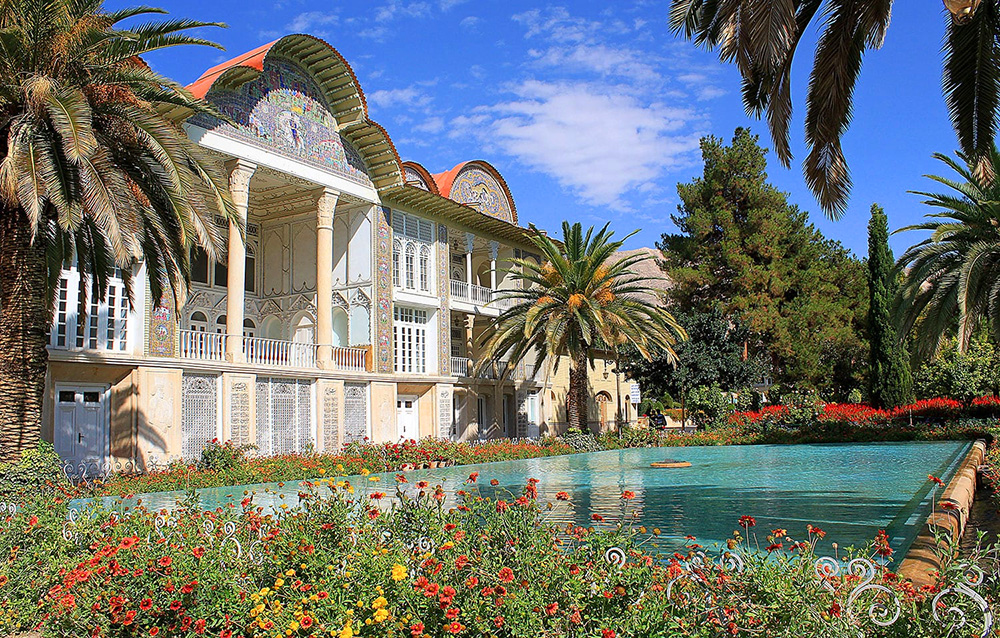 Iraq was in the territory of various Iranian empires for up to 1000 years, and names such as Baghdad and Kufa are all Persian. Baghdad (Bagh, dad), or Bagh in general, comes from the Indo-European root meaning apportion and division, and gradually, because the only one who could allocate with justice and divide with justice was Ahura Mazda, Bagh (the Persian word for Garden) took the meaning of God. And it became common in Persian. Therefore, the first characteristic of a Persian garden is its divine and non-earthly aspect, bestowed from heaven.

The verdure that results from the order in the garden will continue as long as the ruler is just and has legitimacy or, in the words of ancient Persian, has Khvarneh or Faravahar (a visible sign from God that this person is chosen to be king or Queen). If the king or queen has these characteristics, their country will be prosperous.

Zoroastrianism at that time attached great importance to agricultural life and believed that drought would never occur during the reign of the kings who have Farvahar. Low rainfall and drought were signs of demonic domination. As a result, the kings who tried to present themselves as just and blessed by God during their reign had ideas about gardening and acted on those ideas.

One of the most beautiful models of gardening, which happened to be built in the form of the usual Chaharbagh (dividing the whole garden into 4 smaller gardens with each water stream flowing into one of the parts) but with an interesting initiative, is the Palace of One Hundred Columns in Persepolis. The palace was built by the order of King Xerxes, Cyrus’s grandson. All these hundred columns are carved in the shape of a palm tree. One hundred palm trees. If Persepolis had remained unharmed for 2500 years, we could easily have imagined such a garden.

Iranian Chaharbaghs are the result of the order. The same symmetry that is in all aspects of Iranian architecture from ancient times to the current is also the result of the order. Order is the second of the seven attributes of Ahura Mazda, which at the same time constitute his essence too. On the other hand, the garden and canal drainage system also needs a proper water distribution program, which requires informed and skilled gardeners. That is why the form of the country and the affairs of statehood in the minds of ancient Persians were like a garden and gardening.

The Garden is not a jungle. It’s manned by walls and the so-called forest law, will not be tolerated. Then again, it has a garden owner, just as the country has a king, and in all Persian gardens, there is a mansion in the center or north, overlooking the four gardens, which acts as a royal palace. The ruler or gardener must take care of the people, which is the plant life of the garden. If all these elements are in balance with each other and work properly, the country is growing and progressing, and the people are at ease. In this case, the Persian garden is also inhabited and a pleasant place.

This idea, which provides a perfect image of a country, can be a definition of heaven, but we need to know that the word paradise, in Indo-European languages, does not necessarily mean heaven. The Greeks gave the meaning to it because the gardens reflected the notion of heaven. It is this design that is indicated in Iranian carpets, a wall manned garden with a regularized geometry, full of trees and flowers. From the start, it was such a vision that made gardens so important in Iran. Some of these gardens are better known around the world and have made it on to the list of UNESCO World Heritage Sites:

Pasargadae Garden: Of course, if we look at the ancient site of Pasargadae today, we will find nothing but rotten irrigation canals. We can even deny that one day in such a barren place, there was an inhabited garden that its fame pervaded the known world of that time, and many famous Greek historians wrote about it. Cyrus’s gardens were built accordingly by his command and with his design, and in this regard, he created a new style in gardening and garden architecture: Dividing a garden into four parts, directing the water canal through the middle of the garden into these 4 parts, having a royal pavilion to the north or center, and a pool or pond in front of the mansion.

Dolatabad Garden of Yazd: Yazd can be a strange place to build a garden, but with the help of aqueducts, a city was built in the heart of the desert. Dolatabad Garden, which has the tallest windmill in the world, grows the best fruit trees and its mansion is unique and beautiful.

Shazdeh Garden of Mahan: The mansion of Shazdeh Garden may not be as attractive as Dolatabad Garden or Eram Garden, but its garden structure, entrance, and fountain are very exquisite. The canal system that passes through the middle of the garden is the result of aqueducts, but it is properly guided and has a direct effect on the beauty of the whole complex. Isfahan’s Chehel Sotoun Garden and Fin garden of Kashan: At the same time as the Safavids came to power, their claim to Iranian-Kiani (the mythical-heroic era) heritage was growing. Many architectural designs were derived from the ancient Iranian tradition. Chehel Sotoun and Fin Gardens were built with the same design and idea. Even Chaharbagh Square in Isfahan couldn’t resist the gardening tradition. Fin garden was structured in a pleasant climate area in Kashan. Although its reputation in the history of contemporary Iran is due to the death of Amir Kabir, the Prime Minister at the time, but its construction is unique with paintings of the Safavid style and irrigation system that was set by mathematical rules and physic concepts. It is one of the most beautiful Iranian gardens that UNESCO has registered in its world heritage.

Eram Garden: It is not clear in which historical period of Iran Eram Garden was constructed, but it is one of the richest gardens in Iran, which, while maintaining its Chahar-bagh-geometric structure, has cultivated various plant species and turned into a botanical garden. The garden’s mansion is decorated with various arts and beautifully displays the peaceful harmony of humans and nature.

Abbasabad Gardens in Mazandaran, Pahlavanpour garden in Mehriz, and Akbariye in Birjand are also among the Persian gardens registered by UNESCO, although their number in Iran is higher than this, they are not limited to the current geography of Iran and we could see models of Persian gardens in India too.

In addition to religious mythology, Persian gardens represent the elements of aesthetics, order, geometry, mathematics, and the cooperation of humans and nature. They can be the same in form, but in spirit, they are completely different, although they end in a single unit. On the other hand, a kind of unity while plurality. They have all the elements that were created at the beginning of creation by Ahura Mazda in their heart: sky, water, soil, plant, and animal. The first man-made a promise to Ahura Mazda that he will choose him and fend for him in the final battle between Ahura Mazda and Ahriman, the devil. In order to do so, he must create peace and harmony between himself and the nature surrounding him. This was the only way to defeat Ahriman and keep him away from Persia and so, the Persian Garden was created. 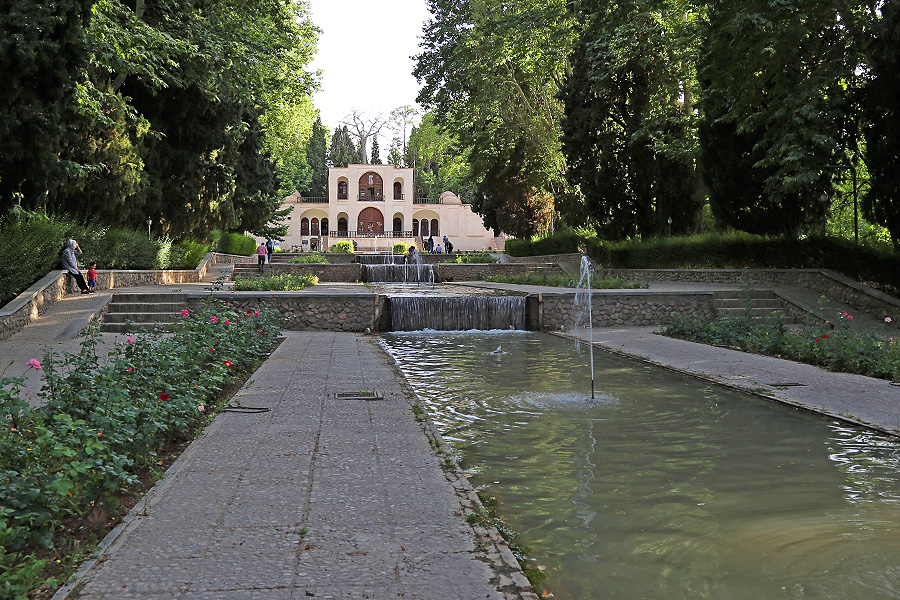