Delicate and meticulous marquetry, produced since the safavid era: At the time, ‘khātam’ was so popular in the court that princes would need to learn this technique along with music and painting. khatam means “incrustation”, and “khātamkārī”, “incrustation work”. This craft consists of the production of incrustation patterns (generally star shaped), with thin sticks of wood (ebony, teak, ziziphus, orange, rose), brass (for golden parts), camel bones (white parts). Ivory, gold or silver can also be used for collection objects. sticks are assembled in triangular beams, themselves assembled and glued in a strict order to create a 70cm diameter cylinder, which section is the main motif: a six-branch star included in a hexagon. These cylinders are cut into shorter cylinders, and then compressed and dried between two wooden plates, before being cut for the last time, in 1mm wide tranches. so this section is ready to be plated and glued on the object to be decorated, before lacquer finishing. The tranche can also be heated and softened to follow the curves of a rounded object. Many objects can be so decorated, such as: boxes, chessboards, cadres, pipes, desks, frames or some musical instruments. khātam can be used on Persian miniature, realising true work of art. 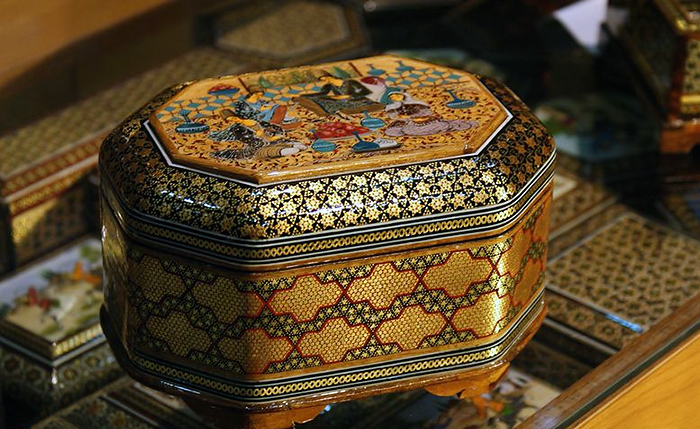