One might wonder why such a civilization as the historical city of Yazd has found its roots in a barren desert. As Nietzsche has said, “He who has a way to live for can bear almost any how”. The answer is somewhere around human’s will and survival instinct. Not only to live and mark their very existence but also to build a legacy. A complete perfect version of delivering the world better than what they receive.

UNESCO decided to register Yazd as a World Heritage Site, meaning that this city with all its characteristics, is worth exploring. Other than having a rich history especially religion-wise, Yazd offers a style of living which could not be found –at least not with the same elements- elsewhere.

Yazd is a city of cashmere (Termeh) and Windcheaters. Though its mosques are no competitor for the breathtaking beauty of Isfahan’s, because they are located in the old town with high cob (thatch) walls and dome-shaped roofs, they invite people to relax and stray in a cozy and quiet environment, free from the hustle of the modern city and crowds. An environment that if you are lucky, becomes so fragrant with a little rain. 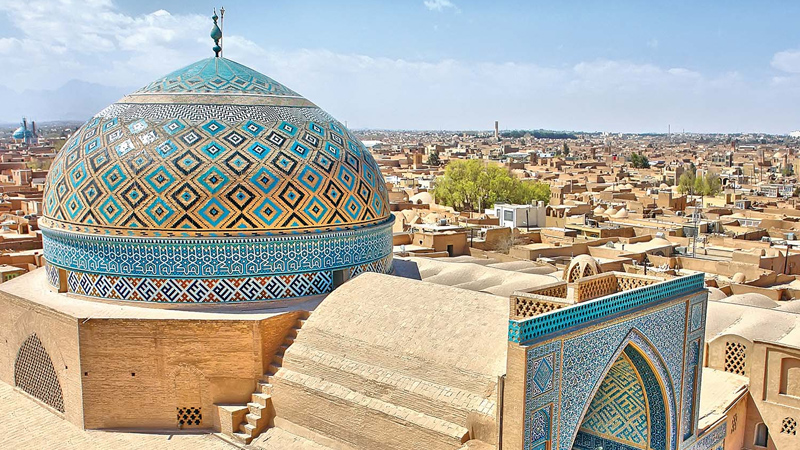 Historically, Yazd has always been of great importance and alongside Shiraz, Isfahan and Kerman is one of the main destinations to visit. Accessing Yazd has not been easy in the past and this came to the benefit of the residences and kept them safe from countless dangers such as attacks and foreign invasions. This gave people the comfort they needed to create Yazd, where its name rises from God (Ahuramazdah/Yazdan). According to the Persian dictionary and linguistic researches, Yazd also means celebration, practicing something pure, holy, and praiseworthy.

Yazd is full of historical and artistic attractions. Yazd is the second historical city of Iran after Bam, but with a noticeable difference; people still live there and it’s not forsaken like Bam. The atmosphere of Yazd accompanies you into the past, and wherever you look, you see hard-working people who have built their city from scratch in the heart of a desert and despite the harshness and roughness of the area, they are very gentle and kind people. The most obvious feature of Yazd is its old cob allies and its historical texture.

As the name Yazd suggests, it has rather a rich background of Zoroastrianism even though the majority of its population are now Muslims. Yazd’s glory peak should be the Atabakan period of Yazd. A local government that continued to rule over this region for about 140 years during the Seljuk dynasty (sixth and seventh centuries AH) and created the main civilization of Yazd.

Old houses that have sometimes been turned into hostels or small cafes and tea houses with pottery shops, goldsmiths, blacksmiths, and the Zarch Aqueduct route are what you will find in the historical texture of the city. Some Eco lodges or small shops allow you to go on the roof which is a must-to-do activity because the landscape from there is spectacular. Numerous wind catchers, dome-shaped roofs, and thatched houses with a pond in the yard. Some say it looks like Agraba!

Yazd’s Grand Mosque with its marvelous blue tiles is located in the heart of this traditional texture, therefore, if you go out of any of its doors, you will reach thatched walls, old penthouses, and narrow alleys. The most famous of which is the old neighborhood of Fahadan.

Wind catcher is a Persian innovation. A brilliant way to adapt to the hard conditions of living in a very hot climate. The Garden of Dolatabad in Yazd, which is geographically far from the old section, with its central pavilion, has the highest wind catcher in the world. This mansion with beautiful sash windows dazzles the eyes. The power of wind underneath this wind catcher is really strong and it can keep its surroundings cool even in the hottest days of summer.

Amir Chakhmaq Complex is wonderful and it’s like as if it’s holding the historical part of the city in one piece and guarding it with a big hug. This complex includes a Tekiyeh, a water reservoir with 5 Wind catchers, the grand bazaar, and a mosque. Accompanied by his wife Seti Fatemeh Khatoon, Amir Chakhmaq worked hard on The Complex and turned it into the starting point of the traditional texture of Yazd. Beautiful lighting at night, as well as the construction of the square itself with blue tiles and high minarets, has given a special shade to Yazd.

In Amri Chakhmaq Square, at the beginning of Mazari Bazaar, there is a Water Reservoir (Ab Anbar) with five Windcatchers that belongs to the Timurid period (1370-1507 AD). Much later, the Reservoir became an abandoned place. Pahlavan Ali Darhami, considering the antiquity and greatness of the Reservoir turned it into a Zurkhaneh.

Zurkhaneh is a special place for a spectacular ancient sport that Yazd has not only successfully managed to keep it alive but has also raised its residences with its spirit. The Zurkhaneh nurtured the hero within them. Taught them how to achieve greatness while being humble, help others in need, and respect the elderly. These are the quality that the people of Yazd possess.

The Water Museum, located across the Amir Chakhmaq complex, is in fact, a historic house of the Kolahdozan family. The architecture of this house is one phenomenon and could be studied separately from the museum. However, the basement is dedicated to the hard labor of those who risked their lives to transport water from far away to the city.

Another invention which the desert brought upon the people, is called Aqueducts (Qanat or Kariz). Yazd gives yet one other style and context of living and it comes from the hardship of Muqannis (laborers who construct the Aqueducts). Supplying water from a deep well has been quite a delicate and sensitive job. Many men have lost their lives just to take care of life necessities because without water there would be no life, there would be no history, no culture, and no civilization. The basement of the historical house of Kolahdozan narrates how this key task was done.

Words do not do justice to what Yazd has to offer, to what UNESCO saw in this historical city to represent it as a World Legacy. It is only by taking the time to walk in this city, breathing in its air, and of course socializing with its people, that you would understand life, in the way that Yazd has created. After all, it is named after the creator, himself.