The social group of people invented art, that is a known fact. Without it, no nation could live on and the human race would have never gotten as far as the moment now. Music is the voice of art, a creative way of communication that can pass the flesh and reach out to the soul. Music expresses and describes the spirit, worldview, and, feelings of each nation. Iran’s traditional music has its unique elements and features, which did inspire many other nations. It reflects love, sorrow, efforts, struggles, all the various victories and, defeats.

Sadly, there were no recorders back then to hear the exact melodies but like any other part of history, archaeological evidence has proved that musical instruments were a major part of many activities since at least 3000 B.C. When the Elamite ruled over the main parts of Iran’s plateau, battlefield drums, bugle and, horns were defiantly used and familiar for the people. Almost any religious ceremony would have a music of its own. Generation to generation, these instruments, the music, and their performers, improved and in some empires like the Sassanid, they formed a style that the word “Persian music”, carried a meaning reflecting a recognizable, distinguished nation. Today, traditional music, folklore music, and even modern music have that spirit of the far past and altogether they perform a whole package of a complete musical history. 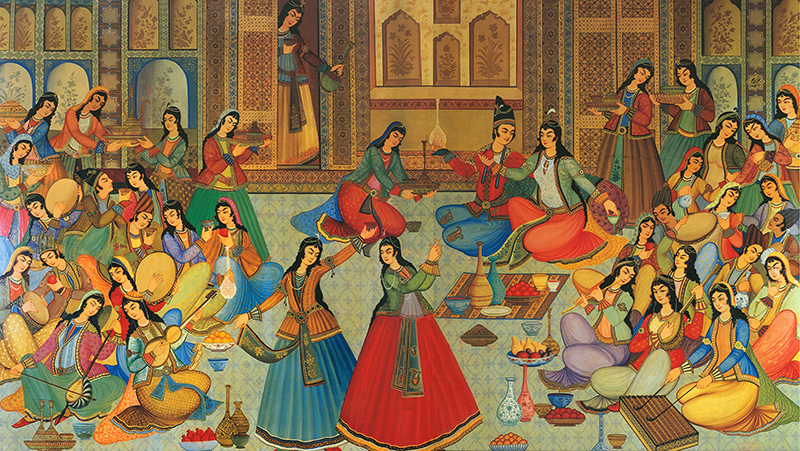 Zoroastrianism, the well-known Persian religion was taught through music. Even nowadays the priests still chant their holy book (verses of Avesta). What fed the music was literature. The documented texts we still have from the Avestan language (spoken from the 2nd millennium) show us that the alphabet had a special character for any possible sound within the language, so to pronounce the word correctly one must know how to vocalize each character. Therefore, we can assume as Zoroastrianism grew, music marched its way and spread its wings all over Persia.

Before the formation of the Achaemenian Dynasty, the face of music was not that much clear but we know for sure that in the religious practices like mourning and worshipping or royal important dates like the coronation of the King which was also religious, music instrumentals were used. History at that time raveled around the Empire, so gathering info on the musical habits of the people is a hard task. Instruments like the harp (Chang) with large tambourines and long-necked lutes were used in either celebration or mourning or to welcome guests which Persepolis was all about.

The most perfect picture of Persian music (before Islam) dates back to the Sassanid dynasty (224- 651A.D.).

King Bahram V, AKA Bahram Gor, was known and appreciated because of bringing musicians and gypsies who played musical instruments to Iran to perform songs and melodies for people in the streets. These gypsies would play Persian folk stories, love songs and, epic scenes to entertain people and this is one of the main reasons that some of the tales we know today are still alive.

King Khosrow the second or Khosrow Parviz (same dynasty), was another famous figure in Persian music. He held special royal gatherings with the best musicians and paid a great deal of attention toward music. They say he had a good ear for that and where ever he wanted to go or stay he always had his “band” with him. The rock reliefs of Taq-e-Bostan describes a clear image of how King Khowrow would spend his celebrations with musicians.

Under his supervision, was the only time that the name of the musicians made it to the history books: Barbad-i-Jahromi who was the master in what he played (the Oud), Nagisa the harpist, Bamshad, Sarkash, Arezu, Azadeh and, Ramtin. Barbad was the one to invent the ABCs of Persian traditional music. What was later called “dastgah” and “maqam” was his creation and legacy.

“Khosrow and Shirin” is the title of the most popular romantic story in Iran which happened during King Khoswrow’s lifetime between him and Shirin, the Armenian princes. Music is written all over the tale and almost everything happens with a band of musicians. Above all, there is this one scene when after so many struggles, the two lovers finally get the chance to be together but the words alone can’t help them to communicate and so, instead of talking to one another, they have their musicians to play songs for each other and tell whatever they had in their hearts throughout the music.

The great book of “Shahnameh”, the masterpiece written by Ferdowsi is yet another source to explore the Persian music’s history. Ferdowsi pictures Iran’s past like no other. Although we have no access to his resources, we know for sure he had many books to collect his info from. He describes the King and Queens, hero and heroines and, any other major character so very well that we become familiar with their habits such as showing interest in music. There are several epic moments where they would pick up a musical instrument and playout their horrid fears or heart-breaking sorrows. Ferdowsi has mentioned many instruments like horns, drums, tambourines, trumpets, cymbals, Indian drums, bells, Rubab, Daf and, Tanbur.

When the Islamic civilization took place with the help of strong and rich empires around it, it formed a new culture that did affect any angle of life that it could reach. Arabic prosody or Arud, gave a whole new style to Persian poetry meter and the traditional Persian music embraced this new meter in a more exciting way, which allowed the musicians to upgrade Barbad’s legacy.

Around the 12th century, Persian literalists, scientists, philosophers and, etc. were famous characters and had published several world-known books about many topics, including music. Nizami-Samarkandi the author of the “Four Articles” mentions that when Amir-Nasr, a Samani King of Iran, was away from home to visit Herat, he finds Herat so glamorous that hi stops thinking about going back to Bukhara. Rudaki, the father of Iran’s poetry who was also a musician, plays his harp and sings with his own words and music. Nizami continues that it was only in the middle of Rudaki’s performance when Amir-Nasr stood up, out of missing his home, and ran toward the doors and gave the order to go back.

Al-Farabi who was known as the second Aristotle wrote the first book about Persian music and music itself (Kitab al-Musiqa al-Kabri), how it could affect lives and if a musical instrument does not do that or the musician fails to do so, then it has gone down the wrong way. He also invented his musical instrument called Qanun.

Since Islam became the official religion, people who mourned Imam Hussain had a unique theatrical play named Ta’zieh. Some say the origins of this sort of play dates back to before the Islamic period. The music of this Ta’zieh, on the other hand, was and still is an inseparable part of the show. Not just the instruments mattered, but also each player should have been familiar with the Persian Dastgah (Persian musical system) because each role required a different one.

Vocalizing the play never was an easy job and it would take years to master in it. Instruments such as drums, cymbal, Dammam, and horns were used in the play and the mourning ceremony, particularly in the southern parts of Iran. Other than using music in Naqali (the act of performing epic folklore stories originated from Iran), Ta’zieh is another way to know how the majority of people interacted with music from time to time.

During the middle ages, one place that was always with music and made a style for its own was the Khanqah. A building specially designed for Sufis to do their tariqa. The dance in Sufism called Sama, was and still is the part where the members would use music to obtain that pure silence place to listen to God.

Other than Khanqah, there are two specific buildings in which music was the main inspiration to the designer and the architect who built them. The music rooms in Sheikh Safi al-Din Shrine Ensemble in Ardabil and Ali-Qapo in Isfahan are full of wonders. The walls are carved in the shape of musical instruments to help with the performance and the sound checking.

By the time that social activities against the monarchy began in Iran, which led to the constitutional revolution and later to the Islamic republic revolution, some of the protesters found music to be their voice and some of the great melodies were created and composed then.

musicians like Aref Ghazvini, Abolhasan Saba, Khaleghi, and, Banan all performed great music and made their age memorable. Persian’s traditional music was the first case to make it to UNESCO’s Intangible Heritage of Humanity list.

After the 1979 revolution, some of the musicians made a remarkable reputation and not just in Iran, but also world-wildly. Mohammadreza Shajarian, Shahram Nazeri, Keyhan Kalhor, Akbar Golpa and, Iraj Bastami are classic vocalists who have been on top of Persian traditional music since they started their role as an artist in their related field.

Folklore music is likewise very diversified in Iran. It has its particular admirers and there can be huge differences between one folklore music and another depending on which geographical region they rise from. Some of these musicians and their instruments date back to a thousand years ago and have kept their form and some have successfully adjusted themselves to the new changes.

Even though the Persian music had its ups and downs in time -and to be fair, it didn’t always have the approval it needed, whether from the people or the government- the outcome for today’s generation is outstanding. Like any art, there is no limit to music and Iranian vocalist and musicians, even poets are now aiming to reach higher than their ancestors.

Persian music is known for its instruments, some were invented by Iranians and some were adjusted to be used in the Persian Dastgah:

Daf: One of the oldest frame drums which mostly was considered as a Sufi instrument to be played in the Khanghah.

Dotar: Comes from a family of long-necked lutes and it is what northerner parts of Iran, specially Khorasanian use to perform music. It is usually played alone.

Kamanche: A bowed spike fiddle, it has four metal strings and, hemisphere carved out of wood with a thin sheepskin membrane. Kamanche was played mostly in feast and celebrations and we can see it paintings from different dynasty at different times.

Nay: Is the Persian reed and has five finger holes in front and one thumbhole in the back.

Santur: This instrument is a struck zither on a regular trapezoidal box and though it’s very old, it was not presented in any solid document until the nineteenth century. Santoor is played in India, Iraq, Egypt, and some other countries.

Tar: is a plucked stringed instrument (a long-necked lute) that is played in Iran (Persia), Caucas, and central Asia. There are two forms of Tar, the Persian (Tar-e-Shiraaz or Irani) and Caucasian (Tar-e-Ghafghaaz).

Qanun: This is the instrument that al-Farabi invented, a sort zither. Farabi played for the public to prove his point about music, he said he’d play a funny melody and so his audience laughed, he played a sad melody and they cried.